With the warmer weather and open windows, we have a wide variety of insects flying into the conservatory.  Most we manage to rescue and return to the garden.  Sometimes ones that hid in corners are found lifeless in the morning. 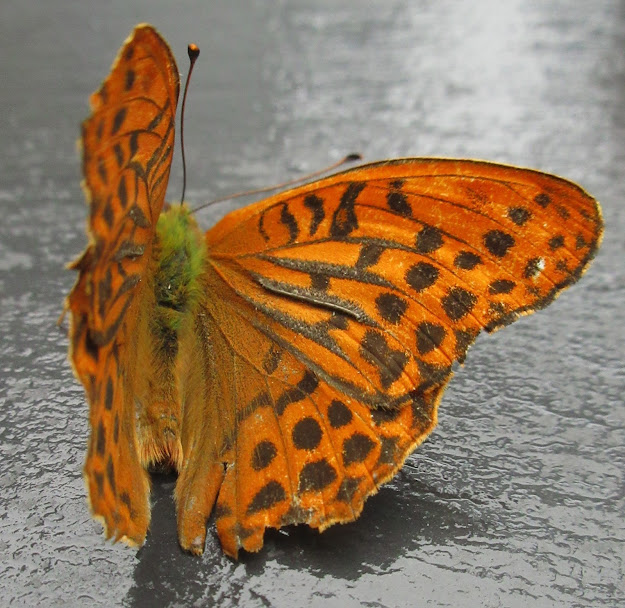 I think this is a male Silver-washed Fritillary as it has prominent streaks on its veins.  All this is new to me and comes from the Gem Guide to Butterflies and moths. 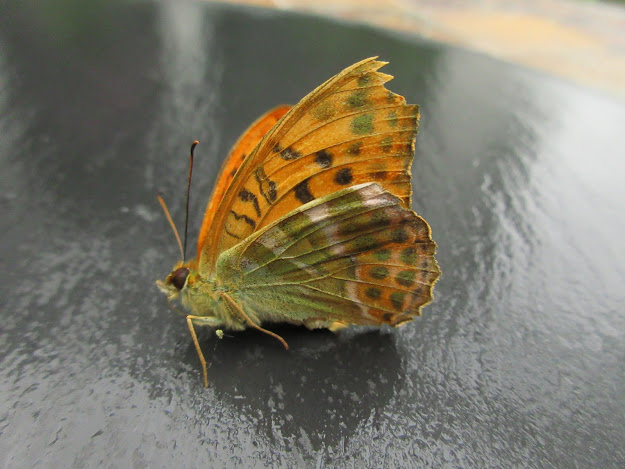 In a Vase on Monday - Very Hyacinth

Last night, just before 'retiring' I arranged the flowers in readiness for this mornings little get together. The flowers had been standing in a bucket of deep water for a few hours, in readiness to be made into a bouquet. I walked through to the Front Room, where Mr S was watching something, and there was an exclamation of 'bumptious' from him.  He saw my face drop, what he meant to say and then explained, was that he thought it was a little like an arrangement Hyacinth Bucket would have made.
Since Cathy gathers gardeners and flower arrangers from around the world, I can just imagine the quizzical smiles.  Hyacinth Bucket, pronounced Bouquet was the principle character in 'Keeping up Appearances', a British sitcom from the 1990s.  Dame Patricia Routledge also appeared in several 'Talking Heads': monologues by Alan Bennett. These have been remade, and Mr S and I were just talking that morning about them. Hence the link to Hyacinth, who may be described as a bumptious character.  I feel a search on YouTube coming on for  the original Talking Heads during the week.
I wasn't quite sure whether to position the flowers in the conservatory or in the sitting room.  Is that the name Hyacinth Bucket Bouquet used, or maybe it was the lounge, I think it would "drawing room"? 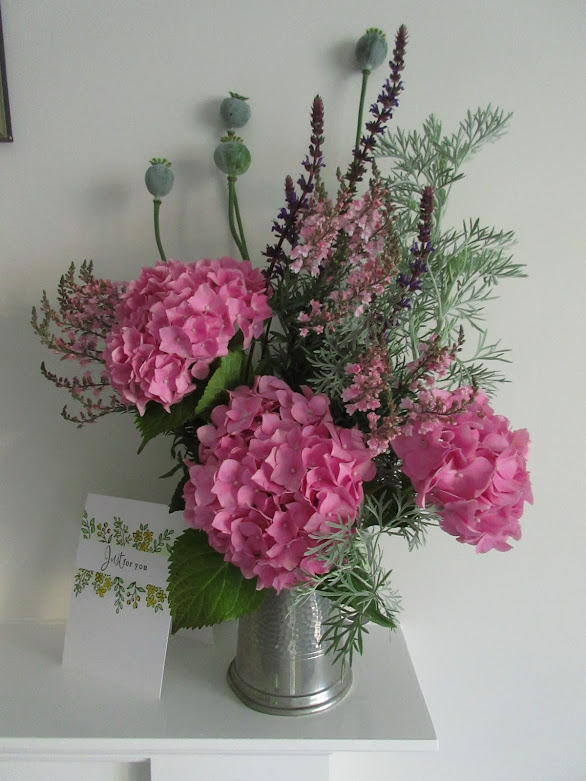 Poppy Seed Heads, Hydrangea cultivar unknown, grown from prunnings gleamed from the Bishop's Palace Wells, pink Linaria purpurea 'Canon Went', purple Salvia nemerosa 'Caradonna', and beautiful soft silver feathery Artemesia Powis Castle make up 'The Hyacinth' bouquet.  Hyacinth would have been sure to have mentioned the Palace and Castle links!
The card is one I received early on in the lock down from Alison C, a fellow blogger, gardener, and IAVOM friend, now a Professional Flower Grower and Florist.  Receiving this little card was so touching I have kept it on my mantel piece.  The Artemesia too was a gift from Alison, hence the card posing by the Vase, another Pewter tankard.
Even if we cannot be with friends, they seldom are out of our thoughts.  Looking forward to meeting up with friends and family at some time.
'In a Vase on Monday' is an inspirational meme created by Cathy for which I give thanks since a regular 'activity' is need these days to bring shape and balance to the week.
Posted by Stasher at 10:26 11 comments:

After writing up my post, I go and read the Props anchor article, then link it to mine. At least three of the items will inspire me during the coming week to revisit, not least is his eryngium and associated post on propagation by root cuttings.  I too love propagation as can be testified further down when I attempt to rejuvenate a tired clump of Iris.
It is impossible for the whole, or even a sizeable chuck of my garden to look good at the same time.  It is small, too small for 'rooms', and therefore if I don't focus on a good area, then I would see the whole, and would be less than content.
(1) Having or finding little areas, where 'collections' of plants create a pleasing tableau  helps bring calm and  contentment. I often seek such an area these days: The garden is my solace. Sometimes the effect lasts from as long as a few days, to a few weeks.
A little area particularly pleasing to me this week backs the 'gravel garden'.  There I go: I have already mentioned what I deem to be two  areas with 'collections'.
The anchor point in this week's favourite area for contemplation is the (2) Rosemary bush, with the golden marjoram and chamomile forming a white and green lacy collar in the foreground.  The Rosemary had grown tall and woody and had flowered for nearly a whole year, continuing over the winter right through tillspring, offering up its pretty blue flowers to any insect needing some sustenance.  It deserves a prize, but it was also starting to take up far too much room.  It needed rejuvenating, and late April it had a reshape with around half the branches quite severely reduced, a feed and a mulch, and encouragement to do its best.  To my relief it is responding nicely. (3) Soon the golden marjoram will be covered with flowers: Origanum vulgare 'Aureum, with its chartreuse green leaves makes a lovely highlight under the dark Rosemary bush.
Usually the close cropped chamomile makes a little green path against which Mr S's hare reclines gazing at the sky.  I would not admit to him that Hare acts as a stepping stone when I want to lean over and trim some rosemary or majoram for cooking.
For now the chamomile is having its 'in floral' moment. This one is (4) Chamaemelum nobile 'Flore Pleno'. This came from my friend Alison's garden as a little clump dug from the side of her plant, from which I teased out separate shoots, and gradually have extended 'the chamomile lawn'.
The front and side garden are still a work in progress, and I am continuing to add plants that like dry and sunny conditions.  My friend and neighbour, and keen gardener Val comes out from time to time for a catch up. We keep our distance of course.
(5) This week Val offered up a lovely plant which she said had outgrown its spot, but knowing her, she probably felt like a change and had another choice plant to position in her garden. Of course it may just be her way of kindly offering a lovely plant.  This week a  Euphorbia probably Euphorbia cyparissias subs wulfennii came over to its new home in the sunny and stony dry border.  Val will still be able to enjoy it as the border is along the side of our house, onto which she looks out on.
(6) Iris Jane Phillips has been neglected, 'sitting and sulking' in the ground. The whole tubful that I had been given, was planted as one in the ground last summer. It had been sending out the message that I was a neglectful gardener.  She didn't even flower.  This week I did the right thing by her.   The rhizomes are above ground, which don't show up here, as they are positioned on a slope.  They will certainly get a good baking here.  Already after two days the central leaves are growing.  No watering necessary as it has been cool and showery. Will she flower next year? I hope so!
Quote of the Week
"A garden is like an autograph book: it is full of connections and experience, it has meaning and inspiration, it is real." Elizabeth Stragman" .  I came across this when I was looking for the origins of Origanum Kent Beauty, which was a chance seedling in Elizabeth's garden.
Posted by Stasher at 10:52 11 comments:

In a Vase on Monday - Threes

Feeling like something simple.....
Almost without colour except the dark summer near black of  Aeonium Schwarzkopf.
For more colourful assemblies, best pop over to see what Cathy and other contributors are posting.
I heard that a friends lost her mother this last week, a sad event.
I have been pondering and contemplating the meaning of life.
I'm suffering from a 'surfeit' of being jollied along, of enticements to be stimulated, of changing variety.
My life is fine as it is, even the humdrum is good.  Analogy: my wooden bowl is beautiful, no need for gilding and glitter.
Posted by Stasher at 10:59 9 comments:

Labels: In a Vase on Monday, succulents

Swifts, house-martins, and swallows are flying overhead by day and by night we have several species of bats, all seen whilst pending hours outside in the garden to try and keep cool. Mostly it is to escape the news and radio.  Inside I am reading blogs and gardening tips...a lovely pastime is reading The Props posts, and other joining in like me each Saturday.
(1) Watching ants and their antics in the garden: a short video published on the Hardy plant Society web site.  Myrmechochory  has been going on in the garden here, I'm observed ants carrying seeds across the gravel garden.  Cyclamen will be coming up in strange places next year I am sure. I am sure the ants are farming the greenfly on the runner beans, now in flower, from the tubers which overwintered in the ground.
(2) Garlic Harvest: This week it was time to harvest the garlic. A quick wash to remove the soil, or the roots would take too long to dry,  and now these beauties are hanging up in the shade with good air circulation.  Since I grew this lot from five fat cloves from a head I bought last year. I shall grow some next year from the largest and best head. Some of what I thought were fat single cloves grew two shoots, giving eight heads in total. I may have harvested these a couple of weeks too early though, but they were starting to be overwhelmed by the Pattipan plants. There are lots of tips on the Isle of Wight site on growing garlic.
(5) Eryngium bourgatii with its silver marked leaves is just coming into flower.  The blues will get stronger.  The whole plant disappears completely during the winter.  During winter and early spring, before it emerges, crocus cover the area.  This year I waited in trepidation to see if it would emerge.  The plant has bulked out nicely from its small origins, and it was relief to see the first deeply lobbed silver veined leaves emerge.  At its feet is a creeping thyme now in flower and just in front, more sun loving plants. It survived the very wet winter pretty well.
(6) At its feet, Origanum Kent Beauty is starting to show her pretty bracts. This is one of Elizabeth Strangman’s lovely hybrids.   From the stems pairs of  bracts are turning pink, as they mature.  Origanum Kent Beauty is small compact plant with flowering stems growing and floating close to the ground.  Collection a few of the types of origanums is fun and not expensive, and as the plants thrive in the dryish conditions, its not surprising that I am acquiring a few more beyond the Golden Marjoram that I have been growing for years.
I learned this week on a walk on the top of the Mendip hills close by, wild marjorams can be found growing on the limestone thin soils. I happened to have a clump grow up in the very dry 'turf' in the front garden, some of which was saved, when I decided to remove all the turf from the garden.
I am trying to compile information on Origanums, for now trailing through the internet.  If any one would like to share any stories, links etc I would be delighted to hear from you.
Posted by Stasher at 08:20 9 comments: