In a Vase on Monday - Very Late

Yes its very late in the Season to be cutting Nasturtiums.  I am also late posting my Vase(s) on Monday one day late. 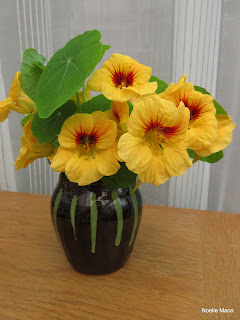 I went out and cut the nasturtium flowers on Saturday as a hard frost was forecasted.  At the same time, I removed all the plants, picked some seeds to dry to give away and also a few for next year.  This is the little vase photographed today Tuesday.  I picked the freshly opened and in bud blooms, and I was wondering whether they would open..here they are all cheery.

Whilst I was pulling up the running stems from the nasturtium, I came across a shoot of my Alstroemeria, and fearing that too would just go to mush, picked the one stem that showed some promise of buds.  Here it is today.... 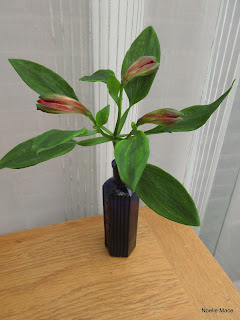 When I found this stem I really felt so very happy.  I had moved part of the clump which I had to remove altogether from another spot, and replanted it last autumn, or was it early this spring, in my new 'yellow/red orange' corner and had feared that I had lost it forever.  I'm not sure of the name as I was given a very small piece of it when I first started the garden here.  Each year the clump had become more and more prolific. 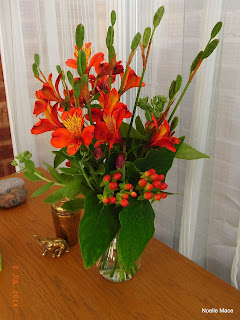 I have also had my spirits raised as I have been looking back through my blog to find pictures of the vase I posted back in July 2014, but before joining this meme.  Here is the Alstroemeria growing in the garden.  At this time of the year, it is wonderful to look back over pictures from earlier in the year and previous years and realise that in just a few months time, plenty will be happening in the garden. 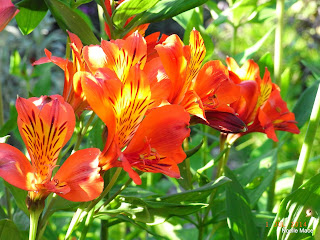 Another vase this week, which I hope will last some time is this one with three stems of Aeonium Zwartkop.  I had great success with my propagation late last year, and too many pots, so I just planted some in my 'stone strewn garden'.  It is so glum in my north facing lounge, that a flash was necessary. 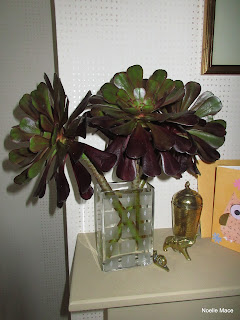 This brings my contributions this week to an end, but at the same time I would like to mention 'Thanks giving'.  Its not a 'festival' we are yet to celebrate in the UK to any extent, and I shall be looking more into this.  We do adopt festivals from America, such as Trick or Treat, but then I have also read that we did have that here many years ago too.  Sunday Breakfast time saw Mr S make the breakfast, having first cleared the kitchen.  He had the Radio 4, and then the Service of Thanksgiving came on straight from America.  We continued with it on, whilst having Breakfast in a Sunny Conservatory.  It got us thinking. Neither of us go to church, but we do value many of the teachings, and with our culture, art, history and upbringing being grounded on the teachings of the Bible, we are quite open to many of its 'lessons'.  Instead of our conversation focusing on putting the World to Rights, fearing and worrying about what is happening in the World etc,  we turned to the things we had in our life to be grateful about.....and a little of this atmosphere of 'Thanks Giving' seems to have seeped into our lives since then.

I think Cathy and all her family will be having a great time celebrating her mother's big birthday.  She made up her vase from her holiday garden, which is just charming.  Its not too late to go and see what see and others have posted.

Labels: flowers, In a Vase on Monday