One of the group of plants I particularly like are the Phlomis.  I first grew a pink shrubby Italica as well as the yellow fruticosa, on a steeply sloping dry bank, and have continued to be drawn to this plant.  Whether on holiday in Crete, Cyprus, and other places within the Mediterranean, I play spot the phlomis!

Currently in my garden I have Phlomis purpurea Matagalio  growing as strong bushes direct in the ground.   I grew these  from seed sown last year. The quickly expanding clump of herbaceous Phlomis russeliana has lovely erect stems of yellow flowers in the Summer,but will probably need to reduced.

I saw this new shrub in the market on Wednesday, and have spent several days thinking about it.  Today there were still a couple of specimens left, and not surprisingly one had to come home.  The label reads Phlomis fruticosa Bourgaie...but I believe the label was probably printed in Holland.  The name appearing mostly on the internet is Phlomis fruticosa Bourgaei.  There is very little written about this plant, and I hope that my appeal to the holder of the National Collection of Phlomis will bring more information. 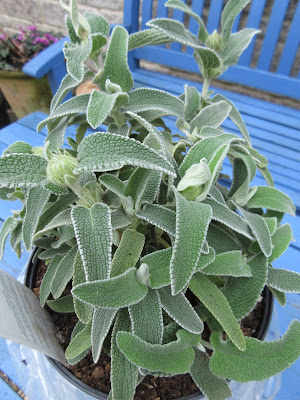 What appealed to me with this cultivar, was the shape of the leaf which is elongated, with a fine undulating margin which shows up silvery compared to the grey green leaf surface. 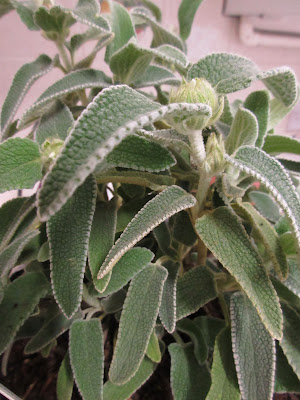 I realise that this plant has probably been cossetted and brought on to look this good in January.  Non the less I am rather pleased to have this to add to my dry and sunny garden, as once it is established, like other phlomis will be drought tolerant.

I was intrigued by this cultivar and wanted to know more.  I got in contact with Beth Smith who holds the National Collection of Phlomis, and she kindly researched this and sent me the following:

"Glad to hear of your love of Phlomis!  P. bourgaei is named in honour of
Eugene Bourgaeu (1813-1877).  It's endemic to Turkey from sea level to 1000m.    It is not a fruticosa cultivar but a separate species.   Phlomis are notoriously difficult to ID.  We are inclined to think that you have a new Dutch cultivar, lazily named.  Maybe one parent is P. longifolia - long, narrow, rugose leaves.  Is the other parent P. leucophracta?  That would account for the greyish, soft, leaves and their curled margins.   We are uncertain and making enquiries from a Dutch contact.  I'll write again as soon as I can."

In addition should I get drawn hook' line and sinker into this group of plants and want to learn more, Beth's advice regarding books on Phlomis : "only one in existence has been a great help and was produced by the former NC Holder:


Just in case I received even more information I contacted the RHS who gives advice to members, using their on line advice system:

I have grown other Phlomis, but when I saw this plant, I knew I had to get it!!! It has longish leaves, covered in grey fine hairs, typical of Phlomis. The leaves are elongated with a soft wavy edge which I had not seen in other shrubby Phlomis. The label gives Phlomis fruticosa Bourgaei and there is not much on the internet except for a couple of posts from Europe. What does Bourgaei stand for and mean? What is the history of this cultivar and where did it come from? I presume that it would have similar cultivation requirements to other Phlomis...sunny, very well drained, drought tolerant etc. I shall attach photographs...no open flowers till later in the summer I am sure, but I can send you some later if necessary. I have just bought it....

This is the answer I received:
Phlomis bourgaei is named in honour of Eugene Bourgeau (1813-1877), French botanical traveller, who collected in France, Spain, Corsica, North Africa, Asia Minor and North America.  It is recognised by Kew and the RHS as a species distinct from P. fruticosa.  It native range is E. Aegean Islands to SW Turkey.
In the wild it is a yellow-flowered shrub (corolla 20-30mm) to 150cm, found in machis shrubland, oak scrub, and pine woods, on calcareous and serpentine rocks.  There is little written about it from a gardening point of view – I did not find it in RHS books but if you can track down copies of The Mediterranean Garden Society Journal, the Index has references to volumes: 40 (pp. 42, 43); 72 (p. 13); 73 (p. 13).
Cultivation requirements would be similar to those for Phlomis fruticosa ie fertile, well-drained soil in full sun.