Jo Hynes from Higher Cherubeer, Dolton in Devon was at the Somerset Hardy Plant Society today.  My friends Sally and Peter Gregson had invited me to join them at the meeting.  Last Autumn I  shared a goodly number of germinated cyclamen coums with Sally which took us some time to pot up into modules, and are now growing on well in her nursery.  Sally therefore thought this talk would appeal to me.

The talk started off with old pictures of what the garden was like back in 1991 when with a young family Jo and her husband Tom took a farm and developed it over the years into a show stopping garden, specialising in snowdrops, cyclamen and other early flowering plants.  Pictures of what they had achieved displayed the hard work required to transfer old farm yard and breeze block buildings into a garden which many travel miles to enjoy.   Of course the garden is also designed for year round interest but as Jo's talk was about enjoying the garden in winter, we had some interesting information about cyclamen and snowdrop growing.

I've renamed the post Cyclamen and Snowdrops.  Jo Hynes has many snowdrops in her collection and is working hard on developing new crosses.  In her garden she likes to position the early flowering C. coum in her winter interest beds alongside the snowdrops.  Today (Sunday), I have repotted the Cyclamen cilicium, and made up a second pot with three small seedlings found in the pot, planted the white flowered coum below, close to Galanthus Magnet, and found some recently germinated seeds of this one too, which will spend a couple of years safely in a pot.  From another pot of coum that I had raised, with pink flowers and speckled leaves, I planted four corms along the snowdrop border.

Jo shared with us her experience of lifting and dividing snowdrops.  Of course the specials are prized and expensive, and I am sure the very choice ones are brought on in baskets or pots.  For ones grown out in the garden, Jo explained that a good time to work and move the plants is when they are dormant in July or August before the bulbs start to grow roots.   If moving in the green one has to be particularly careful not the damage the roots or the leaves, as these permit the plant to renew itself forming leaf and flower within the bulb.  Jo also outlined her feeding regime.  Taking on board her tips, I hope that my snowdrops develop well in the next few seasons.

Being the holder of the National Collection of Cyclamen, except for c. percicum, it would have been rude of me not to acquire a souvenir of the talk:


A Cyclamen Coum with well variegated leaf and a white flower with a flushed magenta blotch at the base of its petals, which I shall plant out in the border alongside my special snowdrops. 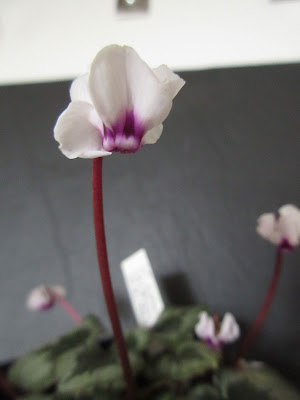 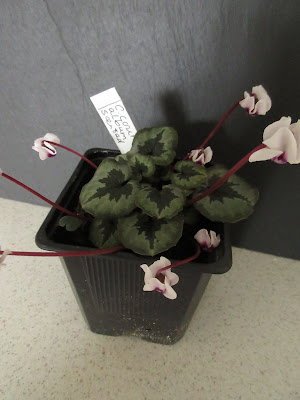 The second plant is a Cyclamen cilicium which Jo had selected for leaf.  This cyclamen flowers in the autumn... 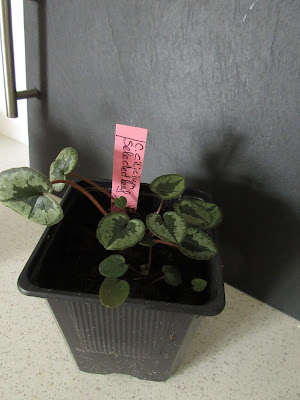 Now that I have got it home it looks remarkably similar in patterning to the C. coum above, so I do hope it is not the case of a wrong labeling.  I'll keep my eye on this one!  It will probably go on the sunny dry slope in the garden, but for now, I'll keep it under observation till flowering time.

Lastly because I like a challenge, I bought a packet of Cyclamen graecum candicum seed, which I planted up on the 20th Janaury!  This is one for a sheltered and warm part of the garden, or even in a long tall pot for display in the conservatory during late autumn when it flowers.

When I posted IAVOM cyclamen coums back in 2016 before we moved, I seemed to have a nicely spotted leaf, which I seem to have left behind in the old garden. Update...found them in the sunny border!

At the 2015 Autumn Malvern Show, I greatly admired this cyclamen....and maybe I shall grow one nearly as beautiful as this one! 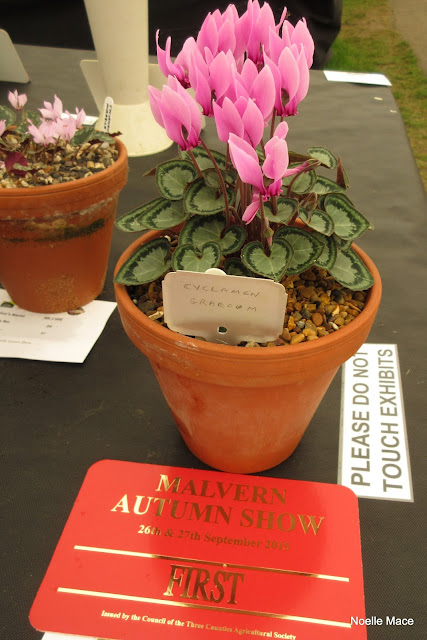