Once again Johnsons came up trumps with this holiday, except for the fact that we, along with at least two other couples, did not get the paperwork which other holiday makers got. However our driver soon found copies of the maps and detailed itinerary to give us. Hotel and weather were gorgeous too!

I was going to write about our few days away in Brighton, but then when I think of all the other places and things we did over the four days, that would not be quite right. So this is Part 1!
Before we got to Brighton, we had several hours at the Portsmouth Historic Dockyard Area. I think we could have spent several days just here. The area is full of interesting things to see, is very clean, tidy, and full of well stocked museums and exhibits. With the few hours we had, we decided to concentrate on HMS Victory. Normally I shy away from anything military as I know just how much suffering comes about as a result of wars, but somehow because this was military or rather naval hardware from so long ago, this did not have the same effect. 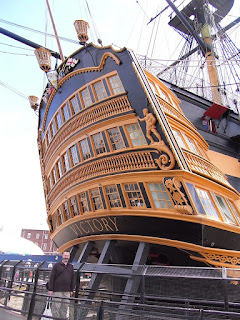 The audio presentation as well as all the sign boards brought so much to the visit. I just wish I had bought the book, but Mr S reminded us that we also now live in fairly close quarters, and where would I put this, and that I would be able to get books from the library etc, etc.
From the Poop Deck right down to the very bottom of the ship where ballast and kegs of water were kept, there is so much of interest.
The manning of this large stove and the provision of food was so important that it was undertaken by an Officer. The stove also had facilities to make distilled water which was used mainly by the Surgeon to treat wounds etc. 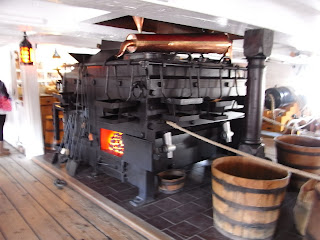 There were chickens coops on board, but no live hens on board these days! The ship would have sufficient provisions to stay out for 6 months. These barrels were used for soaking salt out of the salt meat and vegetables before cooking. 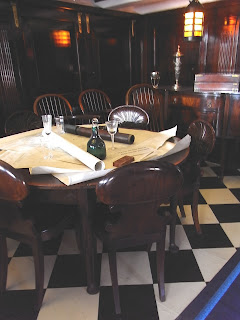 If you were Nelson or a senior officer, you would have eaten in luxurious surroundings. The floor here is painted sail cloth. 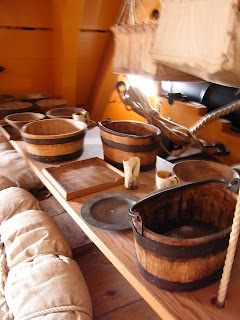 For the rest of the crew and there were normally a total of 850 men, the tables, which were then taken down to hang the hammocks, were perched amongst the cannons. Everything including all the furniture would be stowed away, and all the lovely wooden partitions and panelling in Nelson's quarters would be folded up against the ceiling during battle to allow a full view and ease of passage along the whole length of the ship.

I feel that this would probably be a good way of using small modern houses too, but then it would not be beautiful wooden panels but some lighter synthetic material that is hinged back against the ceiling. I remember that during one of our visits to London from Mauritius, when I was a child, we lived in a lovely old flat near Kensington which had very large wooden partitions to dinning room etc which could be moved back to make a very large reception room probably as large as the whole ground floor of this house, if not larger!

If you were an officer, your lady would probably have embroidered you lovely hangings too! I never imaged a hammock to be rectangular shaped, and flat. I would like to lie down in one of these, and see whether they are comfortable or not. I would love to have a try! But I didn't think of asking! 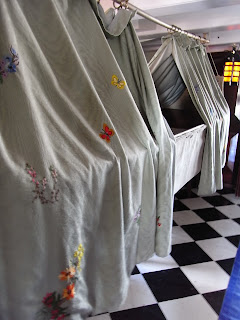