A few weeks ago, I believe someone posting In a Vase on Monday mentioned the 150th anniversary of Alice's Adventures in Wonderland, so please if your read this, please 'admit' to starting me along this road. 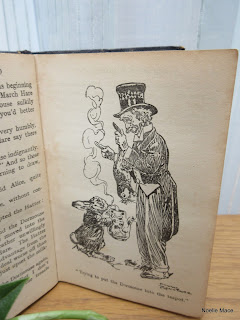 This is an old book, a little wormy, which has my father's name written in the front and which I remember reading from when I was a little girl.  It has travelled across oceans and back again.  I love the old plates and think this is a 1930's edition.

Instead of putting the dormouse into the teapot, I am putting flowers in the sugar basin!  This is a little pewter teapot, sugar basin, and milk jug trio.  I had to rush Mr S to get it down from the loft, get it polished, and madly go into the garden in the rain to pick the blooms! 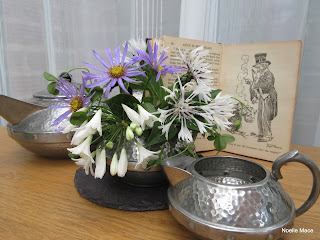 Flowers this week are Blue and White, I always used to see Alice as wearing a Blue Dress and white pinny, even in the black and white pictures, so White Centaurea, 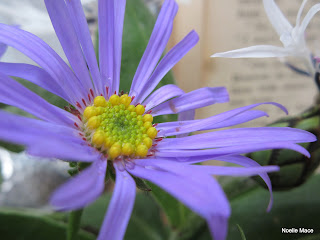 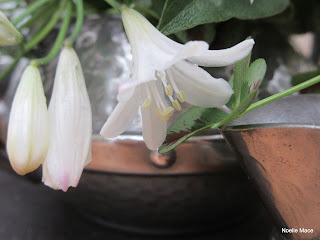 White Agapanthus
and a little of my new clover 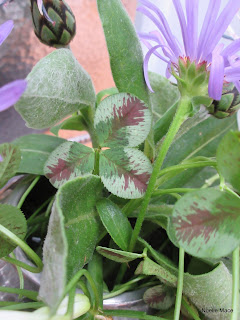 I have liked Pewter for some time now, I even prefer it to silver!  For many years I had wondered if I could use it as I thought it contained lead..but what a wonderful thing the internet is:

This what the Pewter society says:


Towards the end of the 18th century a new alloy called Britannia metal was discovered which could be used for large scale manufacture of teapots, tankards and the like through its ability to be rolled pressed and worked on wooden formers and cold stamped. Up to then pewter had been cast in expensive moulds. This change in tooling with Britannia metal gave resurgence to the industry and new centres were created in Sheffield and Birmingham.
As Britannia metal is an alloy of tin, antimony and copper there are no restrictions on its use for drinking. All pewter of modern manufacture meets the same standard.
I had thought that I may be poisoning myself if I used this, and would end up as Mad as the Hatter though his poisoning would have been from mercury.  If sometimes I am a little mad, a little skittish, it's not on account of having a tea caddy made of pewter!

Cathy has gone all red this week, so please go and visit our hostesse's  site.

Labels: In a Vase on Monday, Plants, posies