In a Vase on Monday - Pressed into Service

Another idiom helped me decide the theme for this week's In a Vase on Monday.  I thought of my little pressed glass jugs.  I would press them into service to act as vases.  I bought both jugs just on the whim because I love their shape. The smaller of the pressed glass jugs has a thistle logo imprinted on the bottom.  I bought it whilst on holiday in Alnwick, and was told by the shop owner that there were many small pressed glass manufacturers in Scotland and also in Northern England.  (I'm notgiving any Scientific names this week.) 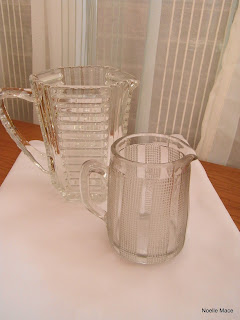 Then as we had a Sunday Walk across the fields, I saw that the Hazelnuts were beginning to fatten up, but sadly the squirrels will have them all soon.  I broke a little stem of them and started thinking of all the young country girls who were 'pressed into service' probably walking from cottages to work in big houses as servants.  It followed that I began to think what their names would have been.

Would there have been a Hazel?  Then I thought of other girls names based on plants and flowers, so apart from Hazel from the hedgerow, from my garden, I have Heather, Poppy some gone to seed and some Welsh, Nigella, Holly, Rosemary, Daisy, Rose, Ivy, Myrtle, Fern, and Marjoram.

My little Grand daughter assured me that Marjoram was a girl's name, when she gave me this lovely little dressed mouse,  when she was just three and a half.  She liked it so much, she also had one, but hers was called Rosemary.  I think Marjolaine is more used as a French name, but since she was at French playgroup, maybe that is where she heard this as a girl's name.  She said she called them these names because we both liked gardening so much! 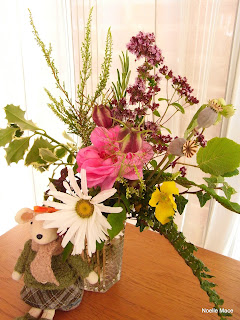 This is the first time I have used my new 'toy'.  My leaf and thorn stripper.  A few weeks ago I had a couple of thorns lodged under my skin, and I knew there was the right tool somewhere, not to remove the thorns from my finger, but to remove the thorns from the rose stems.  I asked a couple of florists locally if they sold them, and hunted in local shops, but to no avail.  Within a few days of ordering off Amazon, this was posted through my door. 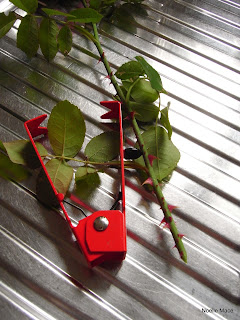 It is really great for preparing the flowers, so from now on, when I hand over a posy of flowers to friends, which have roses in, I won't need to say: 'be careful of the thorns'. 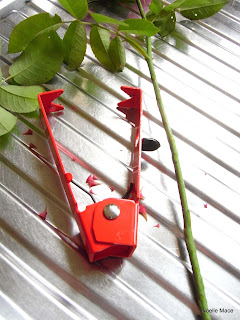 Unlike my garden which is a little sparse at the moment, Cathy's garden has yielded an extravagant abundance.  So for a good contrast why not go and see something very different.

If you would like to comment, why not suggest flowers which are currently in your garden, which have girl's names.