In a Vase on Monday - Clematis Rule OK?

Its going to be really hot today...yesterday the temperature was up to 26 C in the back garden, and we had lunch in the gazebo.  Today I went out straight after breakfast to pick some flowers, as last night they all looked a little overcome by the heat.  Cathy is having a party for Annabelle...so here are some arrangements to join in with her festivities.  Do go and see what Cathy has come up in the way of inspired vase this week.

I picked the material for my first vase, and quickly brought them into the kitchen and put them in a jug which I had filled with water earlier on...and they looked so right in that white jug, that the vase I had planned on using is back in the cupboard. 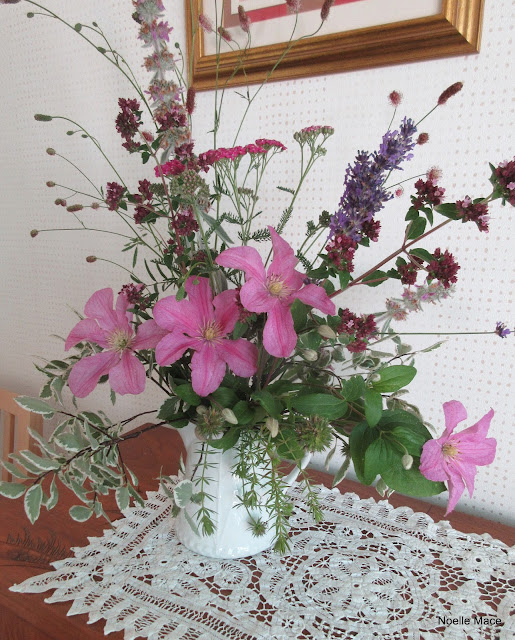 The Clematis in this one is Comtesse de Bouchard, and she is supported by lavender, Pittosporum Garnettii, Achillea Millefolium Lilac Beauty, a tall marjoram, Sanguisorba Officinalis 'Pink Tanna', some 'pompom' seed head of Phuopsis stylosa and Stachys Byzantina, which was given to me by Diane last year.  Even with its really small flowers nestled in grey woolly calyxes the Stachys are attracting many bees. 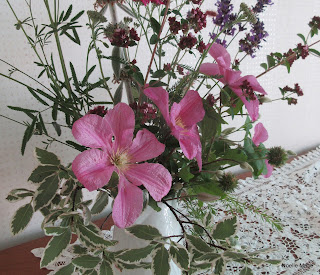 For my smaller 'vase', I chose this stone looking one....again a Clematis and a few herbs:  Clematis viticella pupurea plena elegans, some golden marjoram flowers, and the flower head from Bronze fennel. 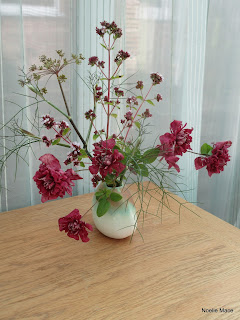