In a Vase on Monday..Nearly by Moonlight

Its Monday evening, and I have just finished arranging my little vase.  It was late in the day when I went into the garden, and I think we had a strange light on account of the partial eclipse. 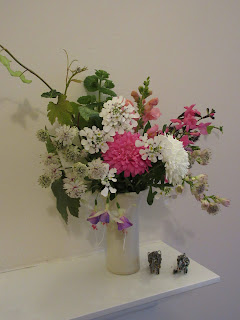 Here is my arrangement.  Most of the flowers have been used over the last few weeks...but there were two which stood out in the garden in the poor light. 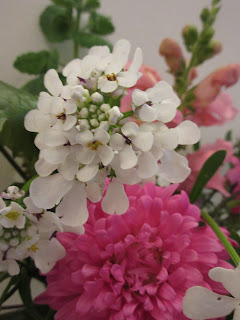 The first is Iberis Gibraltarica ex Betty Swaison.  A seed must have taken a ride in one of the pots, and managed to get a root hold beneath another plant.  I love the large candy tuft like flower, and will be sure to keep more seed, as it is a short lived perennial and quite hardy.  There are the antirrhinums, asters, mints, astrantia, grape and ivy. 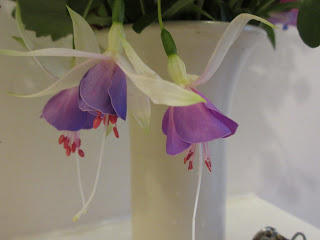 The little hardy fuchsia whose name I cannot recall is also making its first appearance.

From a cutting of Penstemon Heavenly Blue there was just one flower stem, but removing it is bound to help the plant to branch out. 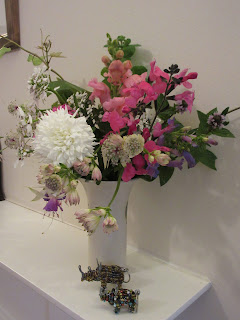 Cathy is showing some true grit and even posting a vase whilst away.  Do go and see what she is showing and also what other IAVOM contributors are coming up with.
Posted by Stasher at 21:04