In a Vase on Monday - The Bare Necessities

That just about sums up my contribution this week...A Vase and Something to go into it: the bare necessities.  On the other hand Cathy has come up with a lovely montage with spring blossoms.

The garden is just too wet to walk down...I  spy a few roses still, they have really had their day though.  Feeling penned in, I have just had to go out most days over the Christmas for walks, often leaving the dearly beloved behind.  I have kept to pavements, going out sometimes very early in the morning, and sometimes late at night.  Time to reflect and time to ruminate, and sometimes nearly trip over branches which have been brought down by the strong winds. 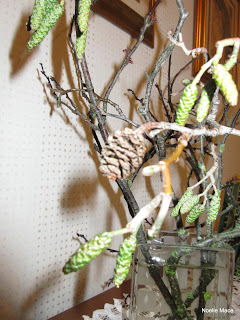 This time of the year with deciduous trees denuded, we can admire their bare bones, their structures and the way these have been further altered by the elements, or in the case of street trees shaped by passing lorries and buses!

Just made up of the 'bare bones' ...the bare twigs in my vase are an Alnus, exactly which variety I do not know, but the road is planted up with them for about 200m each side, and Summer and Winter I often stop to admire their structure with catkins in the spring, and later the cone like fruits, and pick up pieces of it from the footpath or grass verge.  We planted a golden Alnus with cut leaves in our last garden which performed beautifully, and if we have to plant another garden tree it may be this one again!

The second set of twigs were prized from a much larger branch torn off from flowering cherry tree by strong gales.  Round about the house, the roads have wide grass verges, and often I chunter under my breath about people who park up and gouge large chunks out of the soft earth: for sure they are not gardeners!  Each street seems to have different flowering cherries...and maybe, just maybe, in a couple of weeks time I may have a peep of blossom from these twigs...who knows? 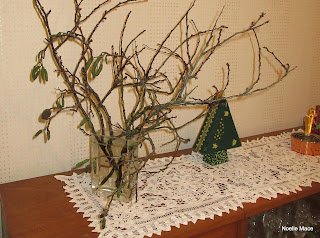 The runner which my mum used to have, normally rests in my linen chest of drawers, and it was when I was hanging up some crochet stars, that the idea of bringing this out occurred to me.  I have had it for years, and this is its first outing, except for its yearly wash and press!
Posted by Stasher at 09:59