The Facebook group baking from Jane Mason's The Book of Buns current challenge is Milk Buns from Japan, on page 63.  In the northern part of Japan they do keep cows and have milk, and this very light fluffy bread is a great hit there.

You start with a roux made by pouring boiling water into some of the flour, then incorporating it when it is cold into the rest of the ingredients.  For the 350g flour there is 50g sugar and 50g butter, an egg, salt, milk, and or course yeast.  This is in addition to the roux mixture which has 50g flour.

Jane Mason explains the technique of rolling out the dough and shaping it very well.  I'm not sure whether I managed to follow it exactly, as I can't remember whether I flipped over each bun between the folding.  I did the first roll out of all the eight pieces of dough. 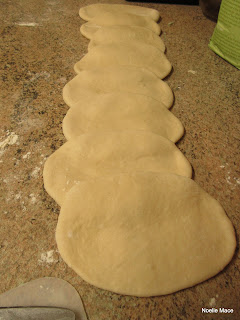 Finally they all went into my longest loaf tin, given to be some time ago by Penny. 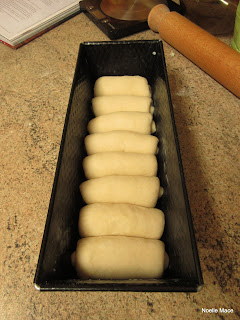 Its rather cool at the moment, and I knew that these were meant to to light and fluffy buns.  I watched to see when I thought they were ready to go in the oven, and it took nearly two hours for the last prove rather than the 1 hour given in the recipe.

Being part of the group, and with other people sharing their experiences,  by seeing what other have managed, you learn...and I realised that I would have to watch these buns carefully.  I put the light on in the oven, and could see than even at Gas No 6 they would scorch, so at 20 minutes, turned the temperature down to Gas No 5 and balanced a piece of baking parchment over the top.  The buns were really thoroughly cooked after 30 minutes, rather than the 45 minutes given in the recipe. 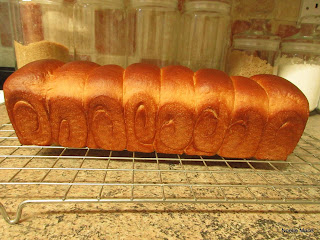 Friday must be bun day here...and we even have some 'spares' in the freezer, just in case I cannot for some reason or other rise to the occasion of baking a special batch.

Mr S was delighted by the sight of what he called 'catterpillar' bread, when he came in from work.  So after our walk, we sat down to tea and a bun.  The bun, which is more like a tear apart 'doorstop', is delicious.  It was light and just ever so slightly warm.  Mr S had his just like that, but decided a little butter, as he spied that I had mine with butter and my homemade cherry jam.  We shall enjoy this for breakfast over the next few days!
Posted by Stasher at 19:13