After my experience with getting a banneton which was not the size described and far too small for 1Kg of dough, I decided to emulate my baking friend Eddie Bromilow. He had baked his 1Kg dough from another recipe in two loaves which he described as 'one for now and one for the freezer!'

There is something quite exciting about receiving new toys which you have bought yourself.  My two new bannetons arrived on Friday.  They are beautifully made, and have two little cloth liners, so there is the opportunity of getting 'ridged' loaves or plainer ones if you use the cloth liners.  The first thing I did was wash the liners thoroughly with lots of clean water, wash and dry the baskets, and given them several layers of cornflour wash.

My friend Tony arrived Friday afternoon with my order from Shipton Mill.  Its great having a baking buddy close by, as we put in a joint order, and manage to get free delivery for our supply of flour that way.  Tony was impressed by the baskets.  I was in the middle of baking my standard, wholemeal and rye loaf, with dried yeast, and when they came out of the oven, and out of their tins, they were much admired.  I had refreshed both the wheat and the rye sourdough starters, so he went away with both, as his wheat sourdough had become 'sick'.

The Do Good Loaf was developed by Dr Clive McCay at Cornell University in the 1940's. We haven't yet as a group baked the Do Good Loaf, but I was itching to try out the new baskets, and this was a recipe I fancied trying.  I scaled up the ingredients to make 1000g of dough as given below.  However its became even better as I added a couple of handfuls of soaked sunflower seeds!

Its well worth working through the printed recipe in Jane Mason's Book for the 700g loaf.

I have upsized the loaf, and changed some of the timings and used the fridge, so that baking this bread works for me, giving the following:

90g wheat starter, 90g stoneground wholemeal flour, 90g water were mixed at about 2pm, and left on the counter

At about ten pm the following were added

It had a good knead for about 10 minutes, then it was  popped back in a large bowl, covered, left for half an hour, had the drained seeds mixed in, then it was put it in the fridge for a slow overnight rise.

At around 6am I took it out of the fridge to come to room temperature.

At 8:30, it had risen a little more, so then out it came from the bowl, divided into two, and shaped to fit the new baskets. 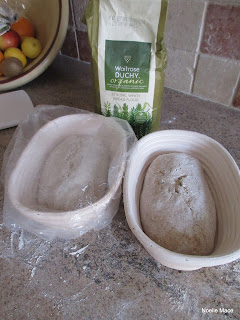 At about 10:45, I put the oven to warm to Gas No 7, turned out dough onto the lined tray, and was very happy on how easily they came out.  The cornflour coatings really worked well. 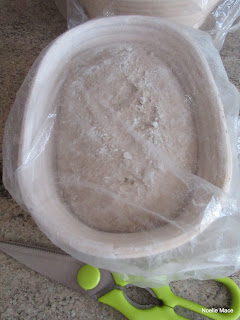 I thought it was ready...put I ought to have tried the 'probe' test described on page 13 of the book!

About 30 minutes in the oven, and they were done.  I could see from the tear near the base that the dough needed a little longer proving.  Jane Mason gives lots of troubleshooting tips in her New Perfecting Sourdough Book. 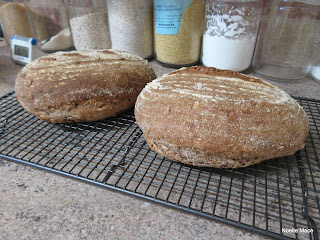 The loaves had not completely cooled by the time we were ready to sit down for lunch..but Mr S said I was too much of a tease, so I relented and we had it with soup, and some delicious Ribblesdale Blue goats cheese.   Maybe one of the best tasting loaves I have eaten....... 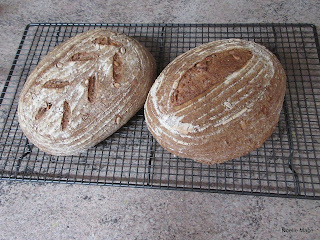 Labels: Perfecting Sourdough, Presents to myself