I used to love joining in with Cathy for in a Vase on Monday...but then things got hectic, and it was easier to just look at the flowers in the garden, maybe cut for the odd vase, without taking pictures and posting.  I have, when time has permitted looked at what others have come up with.  This week Cathy's vase was very cool and calm.

Last week I visited a Friend's Open Studio event, and when she said how much she loved my vases which I put up on my facebook page,  this revived my spirits, and yesterday when I went out to deadhead the flowers, I came in with some, perhaps too many.

The apricot coloured rose Grace is doing beautifully, as is the very dark red rose Munstead Wood.  I've had many blooms on the climbing Etoile de Hollande, and now fully deadheaded and fed, I hope it gathers itself for another good show in a few weeks time. 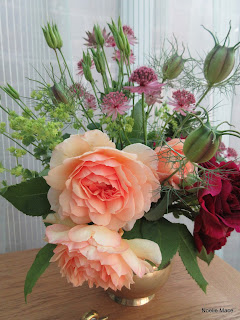 As well as blooms I am also really attracted to the seed heads.  This year the self seeded acquligia have performed beautifully, so I thought to include their seed heads, and one from the Patty Plum poppy, 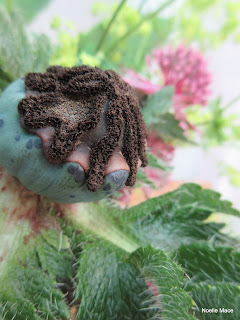 This has been the first year in which this poppy has bloomed, but I am not sure I like the colour of the bloom, or it may be better moved to another part of the garden with different coloured plants around it. 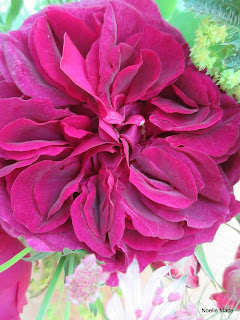 Then I spied that the love in the mist was going to seed, and its red stripe picked up the red of the rose. 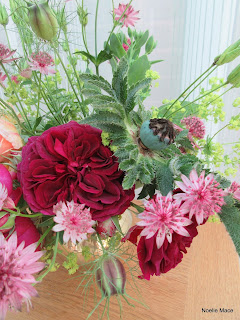 I had been working hard at dead heading the centaurea, but must have missed some, as in the evening, we had gold finches visit and eat the seeds.  It was a delightful sight, so I may leave a clump just for them.  Also in the vase is alchemilla mollis, and a stem of yet to flower sedum, a clump of which was subjected to a late Chelsea Chop.

The astrantia continue to delight me, and the bees and hover flies too! 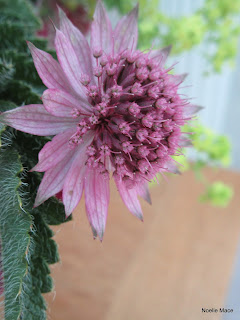 I realise that by making up a vase on a regular basis one does develop a certain elegant style.  After a break, looking at the pictures now, I realise that I picked too much, and could have done better.  However better to do than not do at all!
Posted by Stasher at 12:11

Labels: Grace, In a Vase on Monday