In a Vase on Monday- Roses

May I post this and legitimately link it to Cathy's meme?  Today she is putting her feet up after opening her garden, and has posted about this.

The Vase is a jug, the flowers are in it, but I took them for a friend.  Well when I say a friend, Helen was my teacher for a few weeks, and at several workshops:  mixed media painting, mosaic and buttons.  I am posting on Monday!

Mr S and I had walked down to Helen's  launch night for Open Studios a week or so ago.  We had spied a lovely love token which we wanted to have to mark our anniversary, and which will have pride of place.  I made a beeline, and made sure a little red sticker was added, and left the piece for others to admire, and I do believe that Helen received several commissions because of this.

Saturday saw torrential rain storms, and I had promised to collect the piece then.  In between the torrents, I ran into the garden and picked these blooms, dethorned the roses and made a hand tied posy.  Both of us are suffering from hayfever at the moment, which has meant few flowers in the house.  I have so missed joining in with Kath's meme, that I thought  I would take these roses for Helen, but first photograph them for my vase this week. 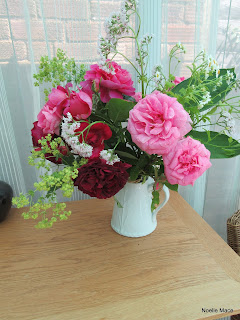 Princess Ann, Gertrude Jekyll and Munstead Wood Roses, with a little alchemilla mollis, leaves from my pot grown Hosta which this year is without holes as I put some copper tape round the neck of the pot, and some Valarian