A few days since our return, and at last I get to look through some of the images. There are so many and it hard to choose from them. We arrived early at our 'home' for the week, to take advantage of the steam gala train rides, which we were able to enjoy all week courtesy of the passes which came with renting Berwyn Station Master's House. 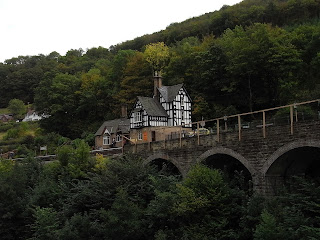 From the lovely window seat in the bay window of the first floor living room, we could keep an eye on the river, bridge and also the trains coming up and down the line. Here Izabelle spies Grampy getting off the engine 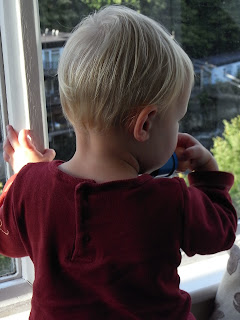 and Grampy looks up at Izzie. 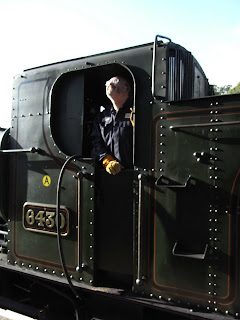 Crossing the bridge across the River Dee we walked across Velvet Hill, and down to Valle Crucis Abbey and Eliseg's Pillar. The carvings and remains of the Abbey were inspiring. 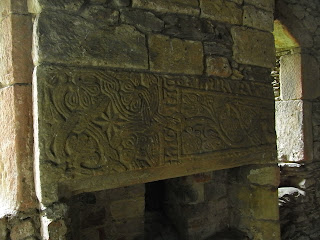 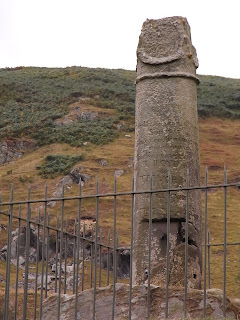 Up from the pillar we came across a pub to which was attached a micro brewery, so before our walk home we had a pint sat outside enjoying the view down the Valley.

On a little tour up the Horse Shoe Pass, we went on to Ruthin where we spent the morning exploring the delightul town, then we just happened to find an excellent place for lunch: On the Hill 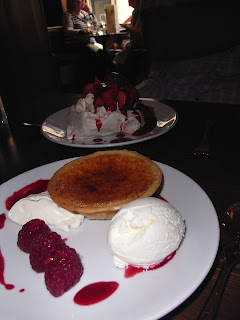 On our way back from Ruthin we called on Rug Chapel, which had the most wonderful internal decorations. 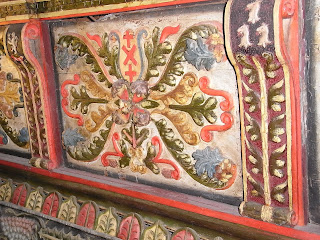 Hanging down was the most delightly wooden chandelier, with angels all around. 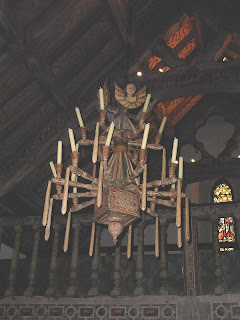 We all went up to Pistyll Rhaeadr, the tallest waterfall in Wales. It was a very windy Monday, and walking down from the falls Izzie did one of her longest runs, into the wind and down the hill, laughing all the way...


Another outing was to the interesting Chirk Castle where with a large group of visitors we were highly entertained by a knowledgebale guide. After a lunch picnic in Chirk Church yard, we went on to walk along the Chirk Aqueduct which runs alongside the Viaduct. 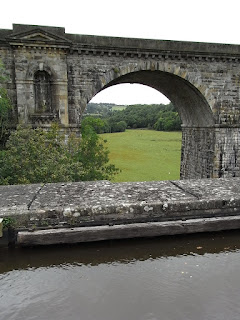 Early in the week, we walked up from the town to visit Plas Newydd, but arrived a little late in the day. However at the end of the week, we visited on the Saturday again, when we had an excellent introduction to the house and the Ladies courtesy of the Historical Open Day. 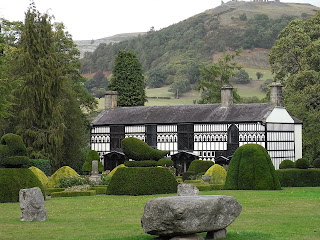 We had such a great time, and saw much more than just these, such as walks along the canal, exploring villages, enjoying playing with Izzie etc., and visiting Dibley's which I could not leave without a few Streptocarpus plants.
We thoroughly enjoyed our stay in this area of Wales, and only two hours drive away.....
Posted by Stasher at 21:22 No comments:

Last night was our main show of the year. This year I entered. Staging started at four o'clock, so Mr S passed the car to me, so this year I was able to enter a few more things.
This is a picture of my runner bean wigwam taken a few weeks ago, and now
it has come up trumps! 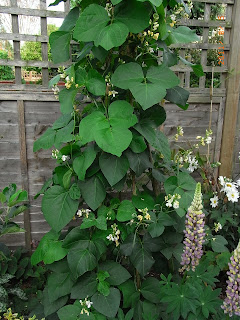 In the afternoon I went out to pick some runner beans and sorted through, to find sufficient to stage 6 similar ones. I was so pleased when they not only won first prize, but also Certificate of Merit, and The Barnet Cup for best in the Vegetables Section...... I had been competing with people with large gardens and allotments. 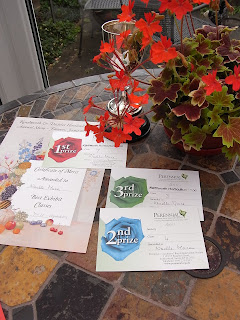 In the Home Produce Section, the Marmalade won first, best in section for preserves, and the Kenilworth Horticultural Society Cup. I also had first prizes in the jam and scones section. My lemon drizzle got 2nd prize.....I baked mine according to schedule....the one which won first had been told that the recipe had typos, when I was baking I was not sure of the recipe, but I have been given 'not judged - not as per schedule' so I stuck in there.....oh well....nice for others to win a prize too! Its actually very good. Except for the scones which I gave a friend, and also the runner beans, the cake in now in the freezer, ready for a later date. I brought the marmalade home for the photo shoot, and because I need my stash to last till January. 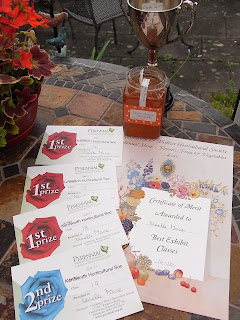 There were so many people entered, they had to put up extra tables compared to the previous year, and squeeze exhibits in. The mayor and mayoress: Mr and Mrs D Shilton were there to present the prizes.
Posted by Stasher at 09:27 No comments:

Labels: Feeling pleased with myself, Kenilworth

In between everything, we have been staying in the Peak District. The first time we stayed in Leek. We went there on because Mr S wanted to have his first experience of driving a steam engine...he wanted me to come, but he wanted to start small. It was a great day, he said he had the most fun day since he was a child! 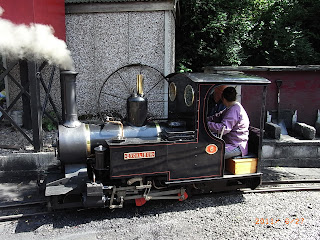 Here I am reversing into the coaling station for a refuel. I hope you notice the beautifully polished brass. The start of the day consisted of cleaning out the boiler with long rods, adding water, and getting the engine up to steam. Afterwards Mr S and I took turns driving up and down Rudyard Lake. 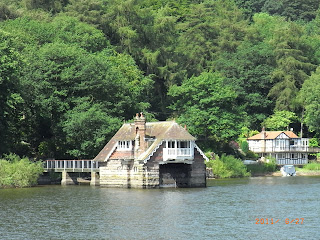 Even though it was not a normal working day we took on a few passengers! Mr S has just told me that Rudyard Kipling's parents loved the area so much, they named their son after the place...


As for Leek itself, it was full of interest.....from medieval buildings to attractive domestic, industrial and civic architecture, every single walk out from our Town Centre house, was interesting. This is just one of the many pictures I took, here one can see the wonderful coloured glass window which looks to the rear of this upper room of a house on Stockwell Street. 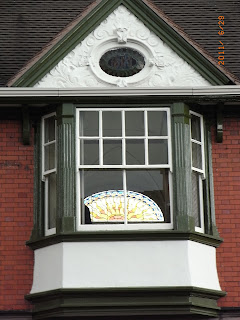 If great interest to me were the wonderful hand embroidered items, the quality of which is close to those of Opus Anglicanum. 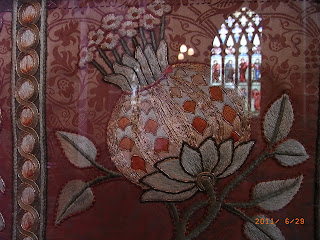 The silks are still vibrant, and it was also interesting to learn about the group of ladies who worked on these. William Morris is closely associated with the town and his influence can be seen frequently. 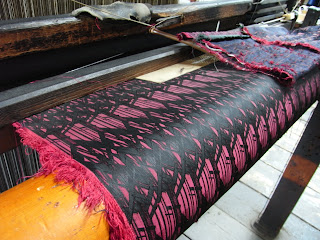 Whilst we were there we had time to spend the day in Macclesfield, where the Museum of Silk, and Paradise Mill were the highlights. During the week, we explored the area, and as usual I did a little foraging. A little way out of Macclesfield we walked along a trail and I spied some wild bilberries. All I could pick was a small handful, until Mr S made me a small paper cone from a guide leaflet he had in his pocket.
. 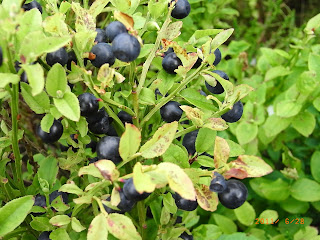 I poached them gently when we got back to our holiday house, and they were a treat with cereal and yogurt for breakfast....we also had a few on the Congleton Oat cakes too...local holiday food or what? 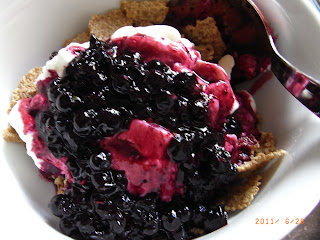 I want to share my passion for preserves with like minded people, make small batches of tasty and individual jams, chutneys, mustards etc, so have come up with the idea of recruiting up to twelve people. I had thought of selling through a local outlet, but would prefer to make small batches, with jars priced reasonably, without another person adding a further component to the pricing. I've opened a new blog: Mrs Mace Preserves, and have an different email specific to that topic, so do have a peep..and if you are interested, or know anyone who may, please get in touch.
Posted by Stasher at 11:27 No comments: