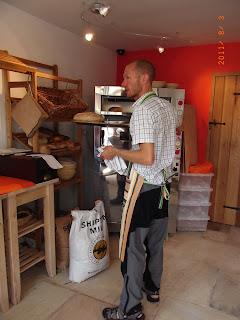 Crustum opened recently in Kenilworth. I happened to be cycling past, having heard about this new venture, and with all my interest in things yeasty, called in.

Nick is a charming person, and our paths had crossed before. I was delighted to find that he is using Shipton Mill flour. I used to visit the mill when I lived in Wiltshire, and bought my sacks from there. Their range of flours is top quality. I've tried Nick's Monkey Bread and also his Sour Dough, both excellent

Its great to have an Independent Craft Baker with whom I can chat.

Whilst we were chatting, I mentioned my love of things doughy, and have been invited to go and bake with him...also I mentioned my passion for preserves, and have been invited to sell my produce there. These past few weeks, I've been researching this proposition, have contacted the Local Authority, and am working on this project....so watch this space!

Sorry Nick, although I am recommending you to all and sundry, I love baking too much not to continue at home.... 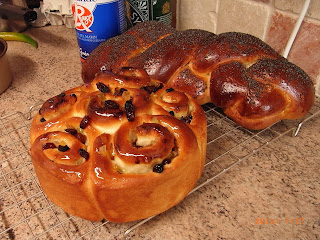 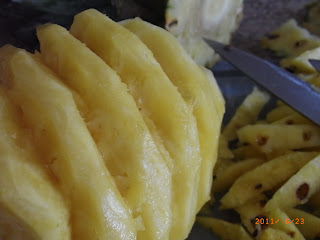 In and around Kenilworth, I've noticed the best and cheapest pineapples I can remember. So about six weeks ago, I looked through all my notes to find a recipe for preserving pineapples. Except for some beetroot chutney, the chutney stash was non existent, so I went ahead and the result is delicious.

The chutney is golden speckled through with whole mustard grains, and delicious with curries, cold meats, and in this hot weather, a slice of nicely toasted spelt bread, with goats cheese and pickle with large side salad has made a nice meal. Usually I start with some freshly made soup. With a fresh bunch of watercress from the market I add courgettes, peas etc, and Mr S thinks he is getting watercress soup, and I do not mention the courgettes!


Peel the pineapple and chop into small pieces the size you want them to be in the chutney, as they retain the size and shape. Peel, core and chop up the apple. Add the fruit to a large pan, with the water, and simmer gently till soft.

Add the vinegar, sugar, mustard seeds, and salt and simmer, stirring frequently for about 1 hr, until thick. If you like your chutney hot you can add some finely sliced green chili before potting. Add the caraway seeds which you have just 'roasted' quickly in a pan. Ladle into hot sterilized jars and seal.


On our way to Stratford on Saturday I popped a copy of this recipe into Jenny's, and realised that several other people had asked for it, and also since it is written on a card, which I may loose, and this is a firm favourite with Mr S....I needed a place where I would find it easily...here!

When I was in Stratford, I popped into Lakeland to get some new jam jar lids, and was disappointed to find they do just one size. Being a little bit of a recycler, I often ask people for jars, and there are many now which are not the old 1lb size....but I have found a wonderful on line specialist: the Jam Jar Shop....and am very tempted to get a preserving pan too. At the moment I use my Stainless Steel Pressure cooker bottom. I shall think on this, sleep on this, and if in a few weeks time, I have not found one in one of the many local charity shops, then perhaps it will be a present to myself time.......

Gallivating and lunch out in Stratford


Mr S is having a week's break from work, and on the first day, we ventured forth to Stratford. This time choosing an all day parking, as on a previous occasion we were stung with a fine for being just a few minutes late.

We popped in and out of shops, and then, we decided to have lunch, and went to the Rooftop Restaurant at the RSC. We choose to sit on the outside terrace with views across the town and over the river too. 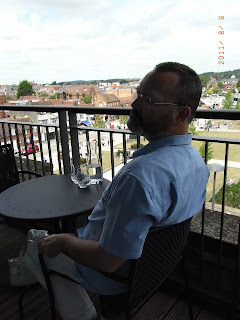 We watched groups resting, picnicking and playing in the park, and boats going past on the river. 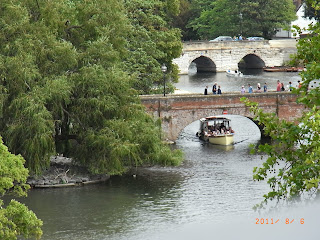 We had starters of game pate, and salmon and prawn cocktail, followed by some wonderful lamb with vegetables, then plum duff. We really had to sit afterwards for a little while with tea for Mr S and coffee for me. Afterwards we explored the area, and enjoyed the views all around. 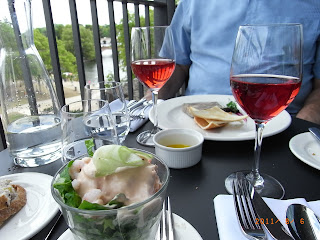 As we went back into the town, we stopped to have a chat with a lady in medieval costume, whom we had been watching from on high......and we were offered some two for one tickets for the Shakespeare properties with free entry for children. Our annual tickets had just run out, and now at least one of our days out when V & I come to stay will be to visit Mary Arden's farm.
Posted by Stasher at 17:47 No comments:

Mauritian Achard a variation developed by my father 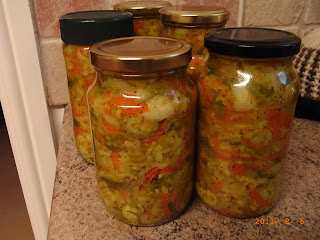 I've been meaning to make this pickle for so many years, and at last it is made. For several weeks I have been researching this, and came across a fellow Mauritian who writes a blog called Inspired to Bake

Prerrna's recipe for Achard uses the blanching technique. I remember 'elders' talking about putting vegetables out in the sun to dehydrate somewhat as a start to preservation. However I remember several bouts of achard making at home when I was a child, with used neither of these.


Back in 2001 when I asked my mother for the recipe, she explained that my father had devised a different process that started the pickle off by salting the vegetables. I know it is 2001, because after lots of searching, which is something I DO NOT LIKE TO DO, I have found a copy of the original printed out email from Mum and Lizzie. Lizzie has only just made Achard in Australia, and having been warned that hers was a little on the salty side, I was very careful with the washing away of the brine phase. My father was a thorough scientist both academic and practical so I have followed his system.


On Thursday which is market day, I bought two firm and tight cauliflowers, a tight cabbage, some carrots, and as there were no small pickling onions, used two large onions, the first of the french beans from the garden, some fresh ginger about two inches of a plump root, 5 cloves ofgarlic, organic cider vinegar, oil, sea salt, and 1/3 of a packet of Achard Spice brought for me from Mauritius, and olive oil. It took me some time chopping all the vegetables, which more than filled the largest of my bread mixing bowls.


Except for the chopped onions, which were packed very firmly into a jar, and immersed under vinegar, the rest of the vegetables, minus garlic and ginger, went into a large plastic bag. Into this I tossed three small handfuls of coarse unrefined sea salt, then squeezed down the bag, to exclude as much air as possible, and shut it tightly. Over the next day, the vegetables in the bag 'wilted' visibly as water was removed under osmosis. Every so often, I moved the bag around, to distribute the brine, and after 24 hours, cut a corner off the bag, and drained off the fluid. Then in a colander, I quickly rinsed the vegetables in very hot water in batches, then squeezed them very thoroughly in clean kitchen cloths.


In my largest pan, I put a teacup of oil to heat, and added all the spices, ginger and garlic, and cooked these gently. I added the drained onions, and cooked these for a couple of minutes. That's all the cooking that is required. All the vegetables are then added, and tossed and turned in the oil. It was at that stage that I was wondering what to do with the drained off vinegar. I added a spoonful or two, and tasted, and in the end I put all the vinegar in. I followed the instructions of putting the whole lot in the fridge when cold enough, then every few hours, turning the mixture. The next day, following instructions, I packed the archard very tighly into jars, then ran a spoonful of olive oil, over the top to form a seal. Its strange to think that all those vegetables eventually fitted only five jars.

So in this Achard there seems to be several methods of preservation: brining, preserving spices, and I wonder whether any anoerobic fermentation takes place as in sauerkraut, but maybe this is inhibited by the vinegar present. I remember that made in this way the Achard keeps in the fridge for several weeks. At home it was very much a making and sharing activity, with about five jars made, and three given away....Looks like I am carrying on this tradition.

Already two jars are with other Mauritians: Marie-Claire and Jenny, and a third is promised to Rita.
Posted by Stasher at 16:36 No comments: 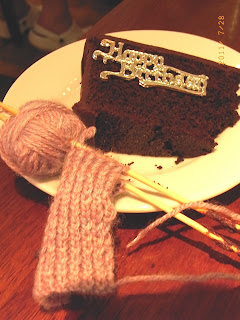 A couple of weeks ago, we celebrated the second anniversary of Kenilworth Knit and Natter. Cynthia made a super chocolate cake, which had two candles, and was topped also by miniature knitting. It was only after the cake was cut, that I thought to take a picture.......

We had a great time, with our youngest and oldest regulars with over 80 years between them, there, although we were missing Mandy, and a few others. So many friendships made, so many ideas mulled over with friends, and help received and given not just over knitting and crocheting topics, means that we all really love this weekly get together.
Posted by Stasher at 15:04 No comments:

And she came walking through the door

Although I am partly a cyber grandma, and can daily get my fix of superb photographs of little Izzi, there is nothing equal to fixing a date when Mr S and I can meet up with the apples of our eyes: Master S, his wife, and Grand daughter S.

This time, they trailed up here, and it turned out to be a really hot day. We met up at the Cafe at Wellesbourne Aerodrome, and Izzie was able to watch all the little two seaters take off and land, whilst we caught up and had a light lunch. It was a sunhat and sunglasses day, with factor 50 sunscreen for Grand daughter and Grandma too.

On our way back to Kenilworth, we stopped at one of our favourite little Villages: Barford. Its such an interesting place with varied architecture. In the church we picked up an illustrated guided walk, and being such a hot day, it was no surprise that we ended up by the river. We had fun watching the river and reeds, and the ducks and playing in the tunnel under the bridge. It is all echoey and we sang 'Little sir echo', which I used to sing to Master S when he was little. This lovely picture was sent to me and it sums up the day. 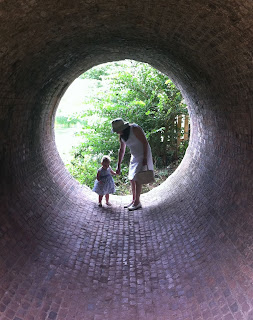 When we got back to Kenilworth, I had to dive into the house, just to turn round and watch Izzie walk into our home on her own for the first time. 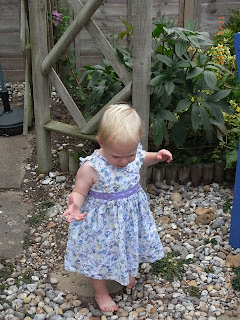