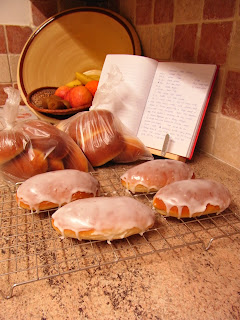 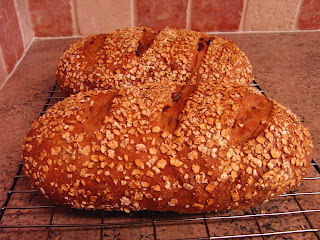 Earlier in the week I made apricot and oat loaves, and since then a superb batch of sourdough spelt loaves.  I used up the last of the flour I bought during a visit to Caudwell's Mill, whilst on a superb break in the Peak District when we stayed near Matlock during the late autumn.  I bought several types of flour, and all baked really well, with their malted flour producing very superior loaves.
Posted by Stasher at 17:41 No comments:

In January I looked forward to the second workshop at the Herbert.  I had learnt how to use the free motion stitch properly on the sewing machine, and finalised on my design.

After several hours manipulating the surface fibres and sewing, having first trialed some of the effects on waste fabric, I felt that I had achieved what I wanted.  Michala was very attentive, and gave the class ample tips and advice, most useful being which  threads to use to create the effects we were trying to achieve. 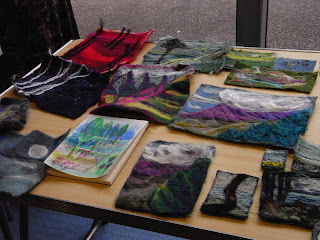 Now I shall have to have it framed, as I think as it is it will just collect dust and be difficult to clean. 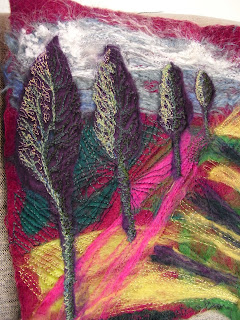 Isn't this brooch made between the two classes by a fellow talented student just so cute.  I'm hoping that soon I shall get a call to say that mine is ready! 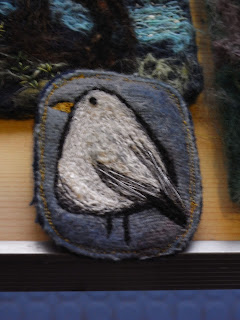 Last week I received a letter.  It plopped through the letter box, just as I was getting ready to go to my Pilates Class.  I love getting real letters and cards, and I tore open the envelope.  I just had to sit down.  What a letter, to have written such a letter to me, to send me such love and support, what a man....all I can say is that he had the best of companions, and loving children, who have sustained him.  In Paul, Judith had the best companion, yes she had said that to me!  I was bereft, and just could not go out to my class.

I met Judith at a knitting group in Swindon many years ago.  She was my knitting guru, amongst many things she gave me my first lace weight yarn, and encouraged me to knit intricate patterns way beyond my usual comfort zone.  She is the best hand knitter I have known and had knit many things from the Rowan Magazines of which she had all the issues, both for her family and as gifts.  She introduced me to Patricia Roberts, Sharon Miller, and Kaffe Fassett.  She had met all of these designers, been on workshops, and knitted the garments....her version of been there, done it, and wearing the tee shirt.  She was an extreme knitter even having fun knitting during  paragliding!  When she showed me the pictures I said she must send them to the magazine where she got the pattern for the baby shawl she was knitting.  I still have the magazine!

We loved to meet up for 'grown up' cake and luxurious teas  with the flowers and leaves floating in large cups, preferably in our gardens.  The day we moved in, the bell rung, and there by special delivery was a teapot, two large cups, special 'champagne tea' from China, and a beautifully hand knit tea cosy!

We shared many interests in common, unusual ones being our wormeries, and compost making.  Judith took over my allotment including all the asparagus beds, many fruit bushes, artichokes, and flowers, and with friends help, managed to enjoy it as long as she could.  I guess I was Judith's bread guru and she did make it to Bertinet's school in Bath after reading my book!  Only the day before I received Paul's card, I took down Bertinet's book to make his walnut bread, and there was a card from Judith telling me about her fun day at the school.  My bread guru V  lives in London and she too has been to the Bertinet School....and is as dear to me.

Although I knew she had been battling with cancer when I first met her, Judith refused to be defined by it, and made a pack with me to talk about everything else but.....she also had made a pack to enjoy her life.

It was Judith who 'goaded' me into starting a blog, and when I moved it was one way of keeping her up to date with matters of interest.  Although I think she rarely commented on the blog, I received post cards every few weeks, special ones, ones chosen with care on her many outings, with feedback and compliments.  All these cards are somewhere around, in knitting books, bread book, gardening books.  I've enjoyed coming across them and shall continue.

On Saturday I attended the party to celebrate Judith's life.  The Venue had been decorated with many of her hand knits, and her quilts, and the baby blanket even though now a little worse for wear, that she had taken with her for her extreme knitting experience.  I think she had even planned the menu, as I recognised many of her favourites dishes .  I recognised many of her knits which were being worn  by family and friends for whom she had knitted in the most wonderful of yarns.  The atmosphere was overwhelmingly sad, but at the same time each and everyone there were like me, feeling so blessed and privileged to have know her.

Judith has been such a positive influence, a kind and generous person, a loving wife and mother, someone who has been the best for so many.  May her influence continue.....
Posted by Stasher at 12:19 2 comments: