Another cake from The Great British Bake Off How to Bake Book, is ready for the long weekend.  This was fun to make, and came out very well, tasty with a lovely texture.

First hubby and I had fun and games over the butter.  I kept leaving it out of the fridge to come to room temperature, and he the consummate tidier upper kept putting it back.  This happened all day Saturday, and when I went down very early on Sunday, whilst he was still in bed, it was back in the fridge!  We do talk really, but obviously I had not said why I was leaving the butter out of the fridge.  I  keep the eggs I need for baking out of sight in the cupboard, and next time, I shall put the butter next to them!

I tried to catch some of the tips Mary Berry was giving on Chris Evan's Radio 2 morning show, whilst trying to get H's packed lunch made, and caught some.  As I was lining my cake tin which must be over 25 years old, I was wondering why my cakes more often than not peak and crack in the middle, and remembered what Mary said on this topic:  it could be that the cake was cooked too high up in the oven, and she said that the right sized tin must be used.  I decided to move the oven rack down one, and then measured my tin.  The tin which I thought was an 8inch was smaller, it was 7inches, which explains the shape of my cakes.....All these years I thought my tin was an 8 inch one!

Never mind, another excuse to buy another Kitchen Toy!  In the meantime, I decided to reduce the mixture and hurrah...the cake came out perfectly.  One of the small ones was taken on a picnic, and the second one halved, warmed, and served with custard for pudding after our roast yesterday. 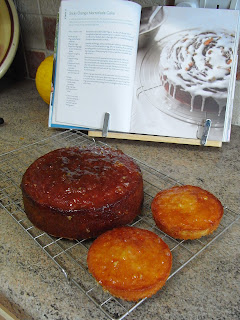 After brushing with extra warmed marmalade, I decided not to add the icing, as it occurred to me when I was weighing out the cake, just how much sugar we were having.  I love the flavour, which is rich and deep, but H's taste buds which are not quite as keen as mine for bitter flavours thought that the cake needed the icing.  One of the reasons I opt more frequently for buns rather than cakes, is that usually the ratio of butter and sugar is so much less.  I shall try this again another time using my lime marmalade.

As we use Goat's butter, and unsalted is not available, I use salted butter.  I wonder how using unsalted butter in baking differs from using salted butter?  Obviously I do not add the pinch of salt given in the recipe.
Posted by Stasher at 18:21 No comments:

First blackberries of the season 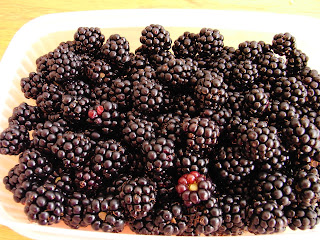 Even though I will be having a nil harvest from the trees in the garden this year, the hedgerows this year will be full of blackberries.  This bowl of large juicy ones is the first of the season picked not far from home.

I've been buying plums, apricots, peaches, and nectarines from the market for preserving....and this week the first of the English cooking apples.  I've made beetroot chutney to the same recipe as last year.  This one teams up very well with pear, walnut and cheese salad.

I bought Paul Hollywood's 100 great Breads back in 2005, and I notice in newer editions, 1tbs salt has been changed to 10g...I've now treated myself to his new book How to Bake.  I am flitting between the two, and choosing recipes to try out.  Meanwhile all my other bread making books have been tidied up and put back on the shelves, as Mr S is wondering whether I am turning into a book horder!  Maybe I am just living up to my name: Stasher!

From his first book, I've made Onion and Bacon Fougasse twice over the last month and each time it has come out very well.  With a bowl of soup, or a selection of salads, cold salmon, salami, ham, olives and chutneys etc. it is just the right accompaniment.  This is one of the breads which can be made in stages.  First one makes the batter with yeast, and this is when much of the flavour develops. 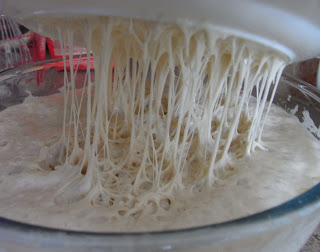 At some stage one can cook up the onion and bacon, then continue with the next stage of including the rest of the ingredients. The baking of this bread gives off the most wonderful aroma, and really gets the taste buds going.  One of the three fougasses made from the dough which uses 400g of strong flour, is sufficient for one meal for three, and the other two go in the freezer.  They keep well, are easy to take out an hour or so before a meal, and reheating in foil in the oven, they really do feel oven fresh after this. 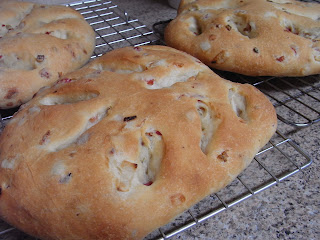 Short break to include views of the sea

I picked one of the best B & Bs and we spent three days in deepest Somerset.  King size bed with lovely cotton bedding, robes in the ensuite shower room, fridge on landing with milk, jugs of iced water, lovely bottle of elderflower cordial as well as every type of beverage one could want, and views of endless fields from windows on three sides of the large bedroon...best breakfasts with multiple choices, wonderful eggs, local sausages, bacon, etc, wonderful bread and toast including four types of homemade preserves. 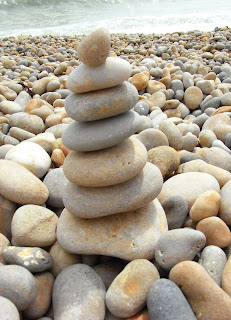 We spent one day walking along the coast at Hive Cove, sat on the beach, then walked back to the National Trust Cafe on the beach....another day we picked up items from the farmers market at Bridport then went down to the beach at Eype recommended to us by Adrienne and Jack.  We sat on the beach within 4 metres on the waves which crashed onto the beach rolling the stones, and creating fun for the bathers and surfers.  Mr S built me a lovely tower....

A second visit to Barrington Court, years after the first, and the garden was a joy.  I was not asked to write on a little tag about my feelings regarding the Antony Gormley Exhibition: Field for the British Isles....I would have preferred for the rooms to be empty!  I guess each person who made one of the little people would be quite pleased with their 'person', but I feel that this was just a waste of resources, and waste of money!    I enjoyed meeting up with Paul Jessop in his Pottery at Barrington Court, and discussed his making a new bread bin for me, to go alongside my ancient pancheon.

One small town with a big wow factor was Sherborne in Dorset...during the very hot day we found a courtyard behind a second hand book shop, and had a very good light lunch with drinks.  Its just round the corner from Sherborne Abbey, and the Almshouses. 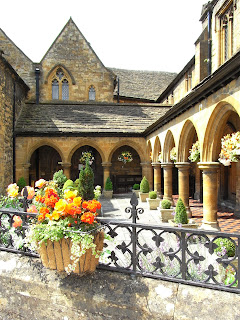 Another treat were the interesting shops on the high street, I came away with a lovely cotton nightdress, and  cotton top from some independent retailers, and a pasta cutter from Salamander, a shop from which I had bought things previously on the Internet.

We've been enjoying 100% wholemeal for a few weeks as our 'daily' bread from a new sack delivered to the door by the Mill Owner at Charlecote.  With a new delicate apricot and orange marmalade made this week, I decided to bake a white loaf to enjoy this weekend, made with goat's milk and a large duck egg, butter and strong flour.  The loaf was 'double-glazed' hence the shine. 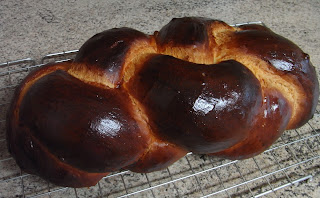 Baked Friday night,  Saturday morning breakfast with juice, freshly ground coffee, bread and preserves in the conservatory was delicious!
Posted by Stasher at 19:43 No comments: