Busy, busy, busy, so busy I have not had time to update my blog....

Poorly, I seemed to have strained/damaged my right hand and it is only just getting better.  So much so that I am considering dropping some activities.  I've learnt to use pain killers and wrap and strap it so that I do not use my thumb so much.  Go through my Pilates class doing exercises on my elbows rather than my hands after all, the rest of me still needs the exercise!  Of course, we have continued to enjoy our walks.

I've decided that I am not going to do my huge library run up to Attleborough and Nuneaton.  I tried it once, and with all the drops and visits, driving and getting in and out of the Library Van, I was exhausted by the end of the day.  After doing several runs around Warwick and filling in, I thought I would be able to do take up my own run, but this one is a huge one, starting just after nine and not back to the Library till nearly five...a bit too much for this volunteer!

I'm baking far less frequently, and even had a complete rest from making bread...but we both found the shop loaves a real let down.  I'm developing a left handed kneading technique, as even the mixer did not develop the dough quite to my liking, but for two batches it was the only way I could manage to make the bread.

After more than five years on the Kenilworth in Bloom Committee and two years Chairing the Committee, running the Annual Competition for Schools and the Town for two years, I've decided to step down, to give me more time during the summer to pursue all my other activities....

At the beginning of the month, we had our lovely daughter in Law and Grand daughter to stay.  What a joy they are.  All of us, including hubby went on a great day out on a Severn Valley Railway.  At Bridgnorth, we went up the funicular railway, then popped into the seventeenth century Town Hall, where this trainee judge presided over the benches. 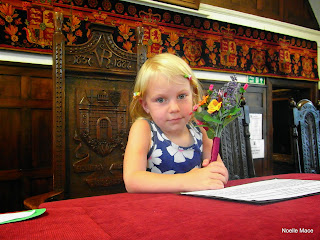 Our Plum Tree this month very nearly broke its branches so heavy were the fruit.  At the start I thought that the whole crop had been damaged by pest, but it was those fruit which were damaged which 'ripened' first.  We had a good harvest, and several friends received sufficient to eat and to make their own jam or chutney. 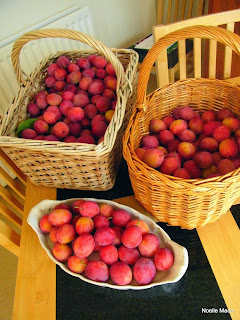 September is my busiest month with respect to making preserves...and the fruit this year, has been bountiful.  I could not resist buying a tray of figs to make some jam.  This was my father's favourite jam, we would get tinned green fig jam in Mauritius.  I like the dark fruit equally. 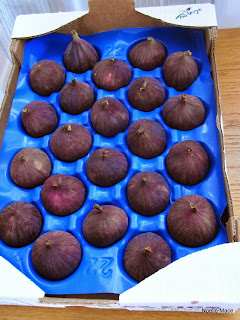 A short break organised to take in Yarndale in Skipton, took us to a great Bed and Breakfast in Harrogate, as even weeks before, all accommodation in the Skipton area was fully booked.  We had the most magnificent weather.  On the way up we stopped at Nostell Priory and had a guided tour.  We were amazed by the extensive and well looked after Chippendale Furniture, and the paintings particularly the Breughel's Procession to Calvary.  We would have liked to stay for the free flow when we would have had more time to look in depth, but we had other things to do.  This is such a wonderful National Trust Property, that we are sure to take this on in again some time soon. 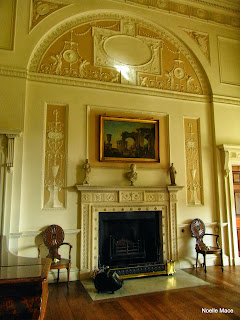 We spent the rest of the day at Harlow Carr on the outskirts of Harrogate.  I felt a little underwhelmed, but maybe I have been spoilt by the likes of Wisley.  The wonderful gardens in Harrogate were great and the wonderful central Valley Gardens were best of all.  We sat by the little Café, and later by the fountain. 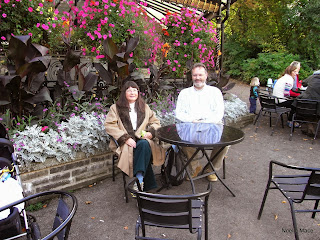 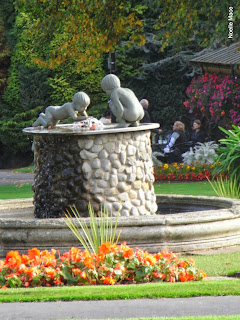 I was dropped off at Yarndale in Skipton....there were so many stands that it took me quite a long time to go round.  I'm not sure of this Venue though.  It was literally in the sheds where cattle are brought together for Auction.  If it had been wet and windy it would have been a disaster.  I think many more people turned up that expected, and it was difficult to move around....and there was a loo disaster.  Something was wrong with the loos, but with a queue longer than 20 mins, there was just no way I could wait, I was even trying to work out where was the nearest wall I could hide behind, and on my way I managed to find some port a loos at the father end of the site. 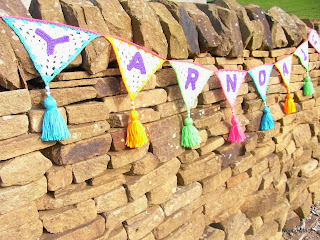 During our full days and evenings in Harrogate, we left the car and walked everywhere.

H is for Harrogate caught here in the roof decoration: 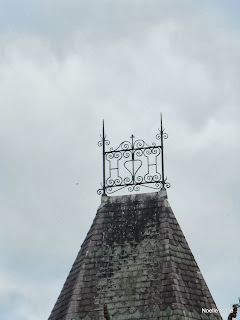 and on the paper carrier bags: 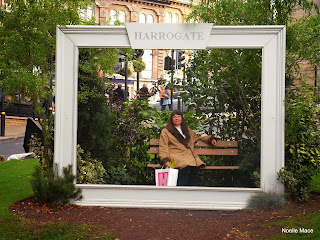 The Villas with the wonderful stonework and iron work gave an insight to the quick development of this spar town.  During our visit to the  the Royal Pump Room Museum, we went down to the basement and viewed two of many of the town's wells where we had a sniff of the sulphur fumes coming off the water! 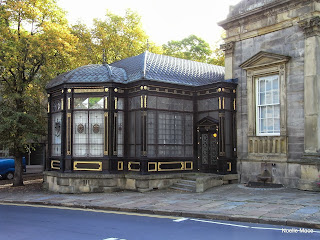 A short detour on our way out of Harrogate took us to Knaresborough...what a delightful small town.  Everything was quiet on the Sunday morning, and in the sunshine we enjoyed a walk around, up to the Castle and down toward the river. 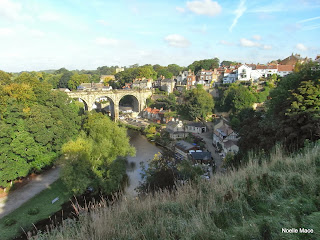 On our homeward journey, I had planned for us to stop at Brodsworth Hall.  This English Heritage House was so very fascinating.  We had a great walk round, with music from the brass band playing on the croquet lawn.  The gardens were interesting and very unusual, with interesting collections of ferns, roses, and clipped shrubs. 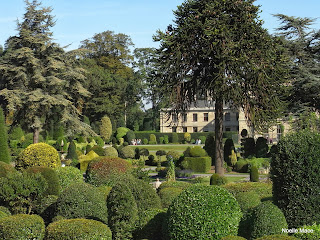