As part of mid winter celebrations and birthday ones too, we took ourselves off on a break to the Capital. 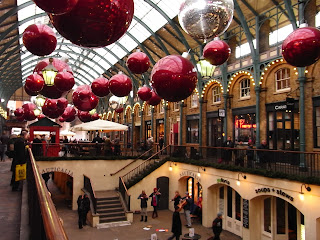 We started off by exploring around Covent Garden.  There were wonderful decorations, and a huge Christmas Tree. 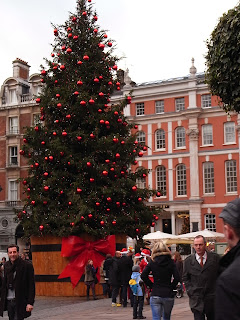 It was really much colder than it had been for some time, so having an excellent lunch, with starters and  wine, in a Moroccan Restaurant, with a warm and fragrant lamb tagine as the main dish, we were set up for the afternoon.

Before we arrived at our hotel we had a coach tour of the Capital, and saw many of the streets lit up with fancy lights.  After we settled ourselves and unpacked we set off for the Old Vic to see Noises Off.  We ended up walking there and back as there was some trouble with the underground! 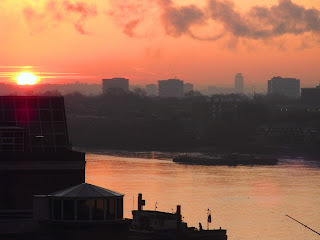 The weather was cool and crisp, and I could not resist taking pictures of the river from our room.  The sunrise was beautiful, and for a short time I thought there was a fire starting in the building opposite, but when there was no smoke, it soon dawned on me that it was the reflection of the sun off the river onto the windows! 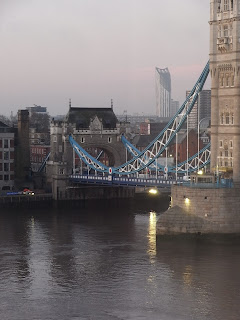 After breakfast with super views, we set out for Borough Market just across the river, taking in the 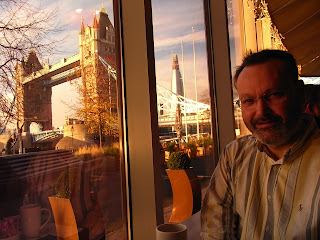 modern architecture south of the river and the classic buildings across to the north. 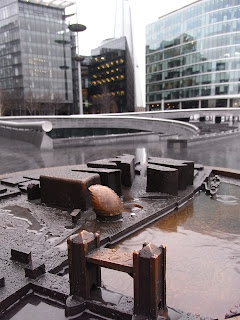 The market was wonderful, with smells and wonderful things to temp both cooks, and those who wanted their goodies ready made.  We bought two pies to eat later on.  This got me into thinking of pie making, so this is a new area to be explored next year...small pies, pies to be taken on journeys or to work, pies filled with fragrant meats, sauces and vegetables. 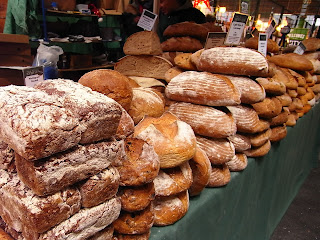 By this time we were getting to know the area pretty well, so cut across the river and caught the underground to the V &A.   After touring some of the exhibits in the British Section, we went to find the famous restaurant, .  At first I thought there must be another one, as we walked into a high ceilinged white modern affair, but  on enquiry we were told about the side rooms, which were tiled and wonderfully decorated.  Lunch is a self service meal where we could choose lots of different styles, but we plumped for the Roast Turkey, vegetables etc., and it was quite the best even when compared with a traditional restaurant.  We lunched in the Morris Room.  With a pianist on the grand piano in the adjacent room lunch sustained us on many levels...

We then went further into areas we had never been to, and we marvelled at the wide array of jewels and jewelry, then we went round some of the theatrical exhibits.  Each time we go to a museum there are one or two items which really hold our interest.  On this occasion it was a large oil painting which we could get up close enough to to see all the details: It was The Triumph of the Archduchess Isabella, painted in 1615 by Denys van Alsloot.  It is a long painting and the Museum site states that it is 381cm long and 117cm high.  We spent quite a long time looking at all the details, and remarked on the upside down Christmas trees set at first story level along the main houses overlooking the Grand Place. Strangely we had noticed a couple of very grand companies and hotels in the city decorated in this manner.  I wish I had taken pictures of these too! 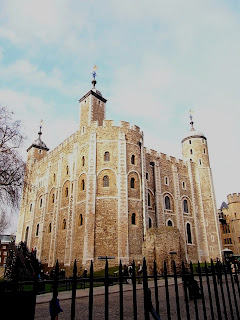 On our last day we spent most of our time at the Tower of London.  Again it was cold and crisp and clear.  The jewels were magnificent, and as there were so few people first thing, we were able to walk slowly past along the viewing platform, after having gone much too fast on the moving floor.

Our day at the tower was also spent climbing  up towers,  looking at old carvings in the stone walls made centuries ago by enemies of the crown incarcerated here, at armour and weapons, and chatting to very knowledgeable period costumed historians  The audio guides took us all around the site. 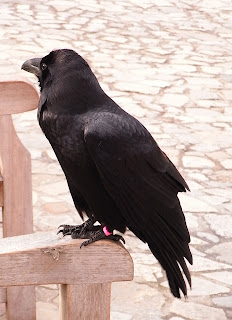 We spent quite some time watching the ravens.  They have cages, where they spend the night, and their wings were severely clipped, so there is no chance of them flying off!  In times past wild animals were also kept at the Tower, now there are very striking sculptures made from chicken wire dotted around the site, sometimes up on roofs on stood on walls. 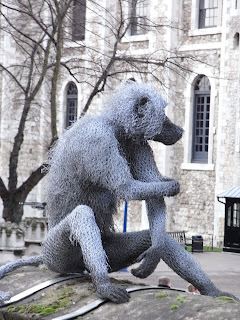 I find London fascinating, so much to see, and it seems that the whole world has come there: faces of people tell this story, as well as shop contents, fine buildings and museum artifacts.  On our coach trip round the capital, we halted in the traffic momentarily, and my eyes locked with those of a protester outside the Chinese Embassy, he was in the static pose which I learnt in my thai chi lessons years ago.... The internet gave the following on this protest:
Falun Gong  also known as Falu Dafa is a series of traditional Chinese meditation exercises from the diciplines known as QiGong.

On the 5th November 2011 opposite the Chinese embassy in London, followers of this form of mediation staged a peaceful protest against the treatment of Falun Gong practitioners in China.
Literature handed out at the event claimed that people practicing Falun Gong in China are imprisoned, tortured and killed.

I guess along with feeling pride in our Capital, I feel pleased to live in a society where at least people can protest peacefully without fear for their personal safety.
Posted by Stasher at 17:23 No comments: 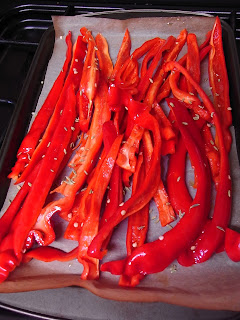 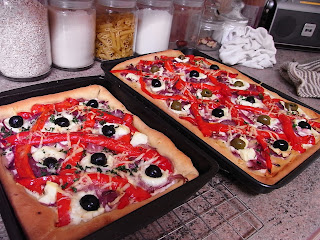 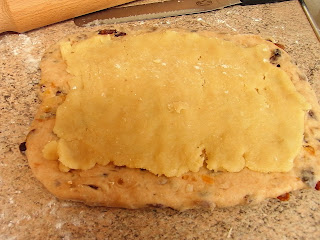 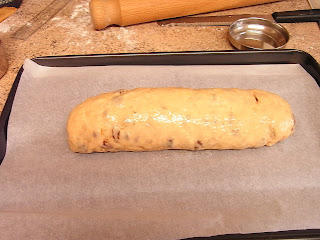 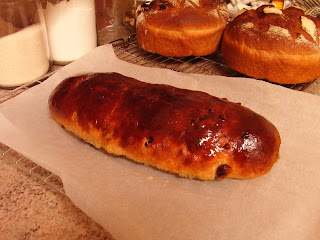 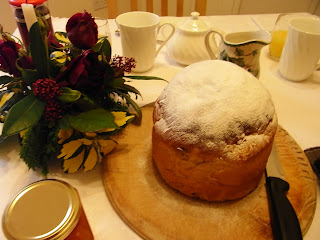 For Christmas morning breakfast I made my pumpkin bread the day before, which again was a great success.  The best preserve for this was the Quince butter, although Mr S just prefers it plain.
Posted by Stasher at 18:57 No comments:

If its going to be 'darkish and coldish', then why not go for a break that includes lights?  Our weekend break with Johnsons up to visit the Lumiere Festival in Durham hit top marks in every way.
An afternoon spent walking around York on a sunny day meant lovely views from the city walls. 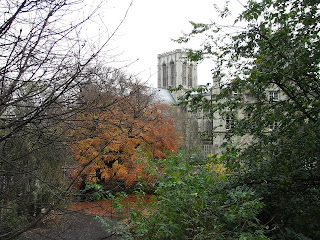 The windows were dressed beautifully and this one caught my attention. 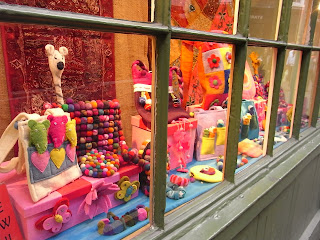 To 'cap' it all there were long queues of happy graduates and their friends and families waiting to get into the Cathedral.  The City was in a happy mood. 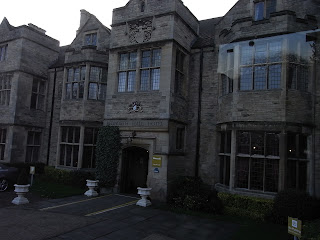 We arrived at our hotel after dark, our room comfortable and warm, and the lounges had real roaring fires.  We explored a little before dinner  which was really good too!  We had the next morning free so we walked down to the nearest village, which was old and interesting.

We set off for Durham after an excellent lunch, and arrived in plenty of time to walk and around the town, before darkness.  I loved this stylish door. 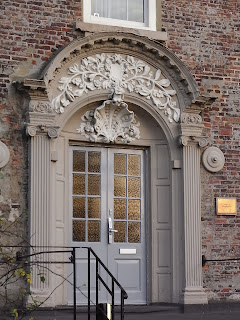 We explored the Cathedral too and had our supper in the refectory...everywhere around the town people who arrived early for the show were settling down to recharge their batteries.  More people had turned up that the organisers had envisaged and a strict one way system with areas where people could be held back was in force.  We must have waited in the market place for over half an hour...but the crowd was in a good mood, and we had a giant snow dome covering the Marquess of Londonderry galloping on his charger. 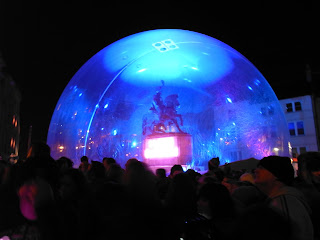 I can well believe those we spoke to who said that they had been the previous night, but had come back because it was so good.  This show is on for four nights only!

The show against the Cathedral, the interior, the fire show in the cloister and College Gardens was astounding. 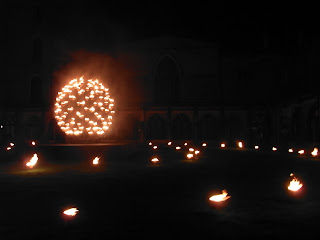 In other areas of the City, artists had completely different approaches:  I loved the one in neon lights proclaiming ' the future will be confusing',  and another one 'everything will be alright'.  Viaducts and bridges were used with great effect, with water too...I can only feel that if we had the chance we would be back on other nights too. 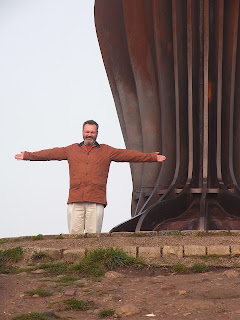 The following day, we had a little detour to visit the Angel of the North, then spent a few hours at the Bowes Museum, where we saw the swan come to life.  When Mr S entered the costume gallery, he knew that I would there some time....the lace was excellent. 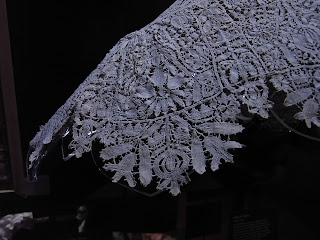