This deliously nutty and rich traybake is from the recipe on page 188 of Mary Berry's Baking Bible. 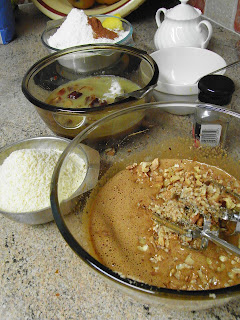 The whole cake has only 40g butter which seemed to be on the low side given that there is 350g flour, and 300g of almonds and walnuts.  I guess this is a nutritious bake.  I cut the cake into two and fronze half uniced.  I cut the iced cake into 12 pieces and stored that in a tin.  It keeps well, and was even  better after the first day. 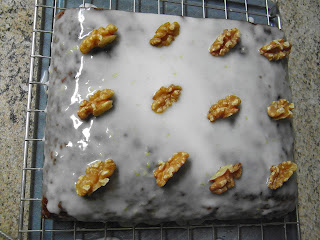 We both felt that the lemon icing did not add that much.  When the second half was brought out of the freezer a couple of weeks later, I made a small amount of butter icing, using maple syrup instead of the water, and this really went well with the cake.
Posted by Stasher at 21:30 No comments:

After baking for the morning, then opening the door to all our little callers, I am now having a little sit down.  We decorated the front windowsill with three pumpkins, and had flashing red and white torches pointed at them.  I decided not to carve them as they are culinary pumpkins, and I have a mind to keep them for a few more weeks before cooking with them.  The pumpkins and other decorations are an 'advertisement' that we welcome callers.  Its an unwritten rule here that children call only at houses where there are visible decorations.

The costumes and make up were very inventive, both boys and girls, toddlers and teenagers were all very enthusiastic about my biscuits, and several parents also came up to the door to partake. We must have had over 70 callers in all.  Each year I try to bake something different.  I have grown to like this new festival, which I prefer to bonfire night with all the fireworks which disturb wildlife and throw pollution into the air. 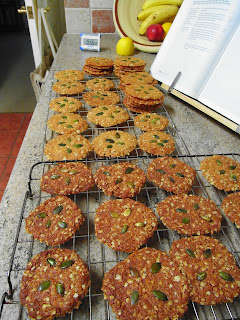 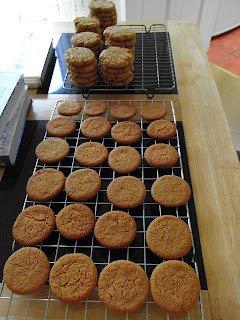 Yesterday my excitement started to mount up whilst listening to Chris Evans in the morning.  He had Mary Berry and Paul Hollywood live in the studio, and Mary had taken in a Lemon Drizzle Cake......just how suggestive was that.  I wonder just how many Lemon Cakes were baked yesterday after that!  Must be in the hundreds.

Its equivalent to watching a film, and seeing someone have a small glass of something, just how hard is it to resist looking in the drinks cabinet and finding a little tipple.  Even though I may not have a drink for days on end it nearly always gets me.....I guess that is why Product Placement is so influential, at least for susceptible people...

I went through my latest Mary Berry's Baking Bible, and chose The Crunchy Top Lemon Cake on page 72, using golden caster sugar, which MB recommends for flavour.  It fits an 18cm/7inch round cake tin, which I have.  Its the easiest of cakes to make, using the all in one method.  It was after listening a few weeks ago that I realised that what I thought was an 8 inch cake tin was smaller than that and it explained my domed cakes....well I have yet to acquire the 20cm tin, but this is now on order....as well as the New Book covering the show. 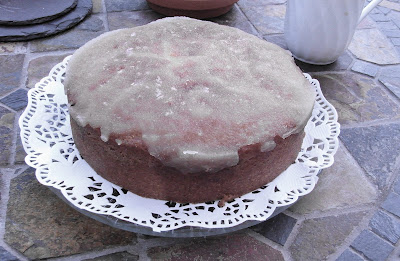 Just as it was ready to cut, a good friend rang the doorbell and brought me some new goats butter as a present, thanks so much Penny, but rushed off before I could offer her a slice....anyway Mr S pronounced the cake delicious.

My 'signature' lemon cake is a simple tray bake with smooth lemon icing which my son just loves and which I have been making for years and years....I think this one is up to that standard.

The Delamere  Goats butter has a delicious taste, and less salty that St Helen's Farm, and therefore will most probably be the one I use for baking, but sadly I shall have to travel to another town to source it.

The Great British Bake Off has been a very entertaining series, and I still have some episodes to watch again!  I've found watching them whilst doing the ironing is making sure that all the ironing gets done without any pain!!

The final had us on the edge of our seats, all the finalists deserved to be there, the pressure must be immense, and I hope all the bakers who took part enjoyed themselves, and expanded their repertoire.  We watched with a glass of milk and slice of Mary Berry's Cake!
Posted by Stasher at 10:43 No comments: 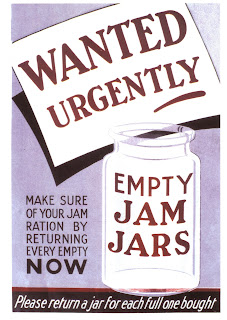 I heard a lot of twaddle on the radio today about a circular which was being sent round saying that it was against some EU legislation to use old jam jars for preserves which will sell at Fetes, gatherings etc.

I like the word twaddle, my mother would have sensibly seen the comments as a lot of twaddle, and said so too, loud and clear!  Glass Jars when washed in very hot water, and then dried off in a hot oven for 10 minutes, and then filled with hot jam, are about as safe as anything!  If we are really so very concerned, then all cake baking tins should be brand new each time baking is done.

The talk generally is about recycling, and saving energy, ask any oldies what it was like years ago.  I picked up this lovely postcard at Museum, during the war they knew just how to make the best use of things.

What could be more environmentally friendly that someone bringing their empty jars, when picking up full ones!  A small group of my friends support my preserving craze and they often get jars of preserves, and are encouraged to return the empties.  I carefully check and clean each jar before reuse, which is exactly the same process as with brand new ones too!  Am I no longer to take jars of preserves for raffle prizes to my gardening club, WI, and other charity evenings?

If I really had to only use new jars, that you be the end of this, as new jars are now costing over £1 each.  Just think of the stupidity of the following:  jars to landfill, or a little less wasteful, and I wonder if anyone has really done a 'cradle to grave' cost on this...send you jar to be recycled:  big lorry to do doorstep collection, well with other stuff too, fuel to take this to a reclying plant, crushing, noise pollution, reforming the jars, transport to wholesalers, then to distributors then to me.  All the lorries on the roads.  Just how many jar miles are there in a new jam jar?

I've just made up a batch of my BACK TO BASICS Seville Marmalade.  After lots of different 'fancy' preserves, I felt like making a really plain marmalade.  Just Organic Oranges, freshly squeezed lemon juice and sugar.  It is in the technique that one achieves perfection.  This preserve is made over three days, and yes it does make a difference!

When we were on holiday hubby bought some preserve at a well known Deli in Arundel and I was shocked to see that additional pectin and jelling agents had been used.  I guess they are needed when jams are transported and buffeted.  I like the fact that my preserves don't contain any such substances, only natural fruit, and sugar.