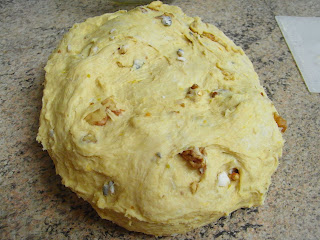 Using some pre-baked pumpkin from the freezer, first thawed of course, I followed the recipe for this one, using blue goat's cheese, and refraining from adding anything further like fennel seeds. 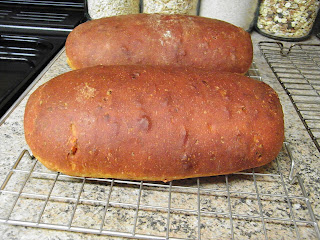 I made two free form loaves from the quantity given, so that one loaf can be put in the freezer and saved for later.  I'm just about to go downstairs and toast a few slices to have with some home made chicken liver pate made much earlier this morning, to go with salad, to have for our lunch.
Posted by Stasher at 14:30 No comments:

The parable of the woman and the lost coin

Why do I always think of this parable when I loose something then spend lots of time looking for it?  It must be something hard wired into my brain from an early age...but somehow it has got reworked for me......

Loose something, and then try to look for it.....in the meantime, like me, you will probably have tidied out all your drawers, sorted out more things for recycling or the Charity Shops, find cards for special people which one had stashed away and forgotten, find other things that had been forgotten......then finally find your item.  Double joy!

So if I have lost something, I do not despair, I look for it knowing that I will find even more.  Sometimes if I have lost something, I ask, and then someone somewhere will have seen it.  The most amazing incident was loosing my cycling gloves quite some time ago, and then when I asked about this, a friend said that she had seen them in Town down an alley, and the gloves and I were reunited! 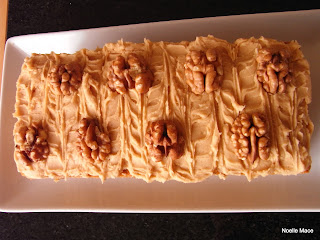 No baking this week as my Valentine and I went away for a few days, so I'm posting this great Coffee and Walnut Cake which I made a little while back.  This is one of my very favourite cakes, and when we are in cake shops having coffee etc, this is the one I usually go for, but sadly it often disappoints due to not enough walnuts and not enough coffee.  Made specially for my daughter in law and grand daughter visiting for a few days at the beginning of February.  Hubby needs to steer clear of coffee, so this was just for the girls!

Again I made a two egg sponge in my square tin, with walnuts gently roasted in the oven before using.  I made this by the traditional method of creaming soft butter with golden caster sugar, used lovely fresh eggs, and self raising flour, but not adding any further baking powder which I think dries out the mixture and gives it that rough tooth feel...not very pleasant.

I measured my tin again and it is slightly bigger than I thought, which explains why cutting a 4 inch slice, leaves the other larger, still that means trimmings for the cook!!  With the amount of coffee and the roasted nuts, its was really tasty!!  Just a standard butter icing flavoured with strong instant coffee, and a little liqueur.  This gives eight chic shaped slices each with a walnut..
Posted by Stasher at 15:38 No comments: 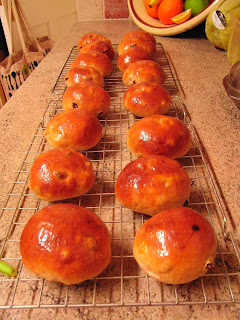 Not the American ones, with butter icing.....

The ones which used to be sold by the muffin man....British Muffins, sold as far back as the 19th Century.

I was told by my son's great grand mother, that during some bleak times, when as a stonemason, great grand father was injured and not able to work, with no Welfare State as now, he would make muffins on a griddle by the fire, and she went out to sell these, to get enough money to supplement food, mianly flour, eggs and milk for the children, which was in addition to wild duck shot on the Morcambe Bay, and prawns, sea food, and wild plants gathered on the shore, with veg from the garden.  Grand mother could never stand someof these sorts of food later on, specially duck, perhaps it reminded her of poverty, but without the thought of the miseries of poverty, these foods now seem the perfect balanced sustainable diet.  Well sustainable at the population densities of the 1930's.  If everyone now went out and shot wild duck, and picked wild plants, the countryside would be completely depleted. 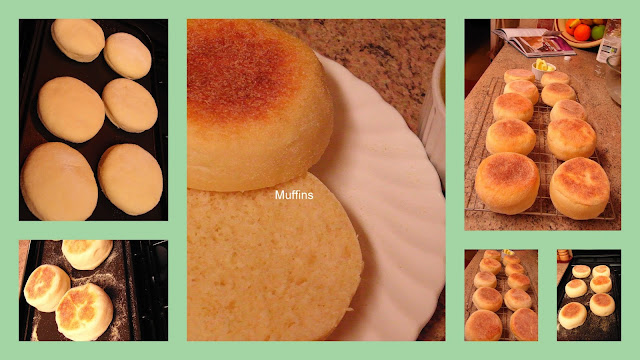 These ones were made by me....plain simple and just wonderful toasted, buttered, and for me golden syrup.  But anything but golden syrup for hubby.  We had our first ones,the next day for breakfast, toasted and topped with a poached duck egg...wonderful.

With all the years of baking, this is the first time I have made muffins.  They are simple fare, easy to make, and delicious....

As usual I went through a number of recipes, and settled on the one given by Peter Sidwell in his book: Simply Good Bread, which I have borrowed from the library.  Overall I find this book inspiring, but I do not think the recipes are that well thought out.  For example no second rising time is given for the muffins, or the malt loaf.  I reviewed the method given by Andrew Whitley in the excellent Bread Matters tome, and he gave the second step.

I just love the gritty texture which ground rice gives, and used that very successfully on this batch of muffins.

I used goat's milk and yogurt.

With the usual kneading, and I think more liquid than that given by PS, and proving.  The dough is rolled out to a little less than 2 cm, and cut with a sharp round cutter.  In this batch I rolled them to the given 2.5cm, and got 10, rather than the given 12 in the recipe.  Some of the muffins were a little too thick, so I would definitely make 12 next time.  No problem though, I just got three slices from the thick muffins to toast, but that mean that the slice in the middle does not get that lovely gritty layer.

Dusted well with ground rice, allowed to rise, then baked in a pan or on a griddle.  The technique is to turn them the first time just after a minute so that one gets two very flat sides.  After about 6-8 minutes on a medium heat, with a gentle goldness not a fierce heat which will scorch, they are finished in the oven at 180C or Gas Mark 4 for a further 10 minutes.
Posted by Stasher at 13:46 No comments: