I have another Auricula: Clouded Yellow, which frequently wins prizes, and that may be because it is at its best at show time.  Blue Yodeller however is a real performer, but last year I did not split the plants up and repot...lazy or what...but I just had to bring this in to have in the living room, as it is picture perfect. 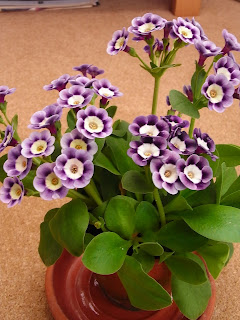 I have learnt that they need maximum light during the autumn and winter months, and more cool and shady conditions during the heat of summer....they are all safely out of the sun and in the summer house, which is open on all sides, but is protected from the rain, which means that ones with the farina or paste on the flowers and or leaves are safe.
Posted by Stasher at 17:07 No comments:

Kenilworth Festival Knitting in the Park

Through the local grapevine, aka Kenilworth Knit and Natter, and on Ravelry, a request was sent out for knitters and crochet people to turn up today, to bolster numbers in the Craft Tent.  I set off before 10 this morning, well dressed, for the temperature outside read just 8C, with spare needles, and some books.  Jane Harrisson was the 'leader', as an engineer she is at home with all manner of knitting machines, as well as hand held knitting needles. Jane brought along some lovely pieces, and I tried my best with an interesting display, and during the morning a few pieces found nice homes.   There were three other fans ready to help and advise visitors on knitting etc.  There was quite a lot of interest shown in the Local Knitting Groups as well as the crochet courses being run by Caroline Sandford at Sew Arty in Kenilworth.  She made a lovely head band for little Izabelle, and also found it in her to part with a very cheeky looking frog, and it is destined to be a special birthday present for someone,  In addition to myself Melissa and Alainea rallied to the call for help, and here we are all, behind our heap of yarn. 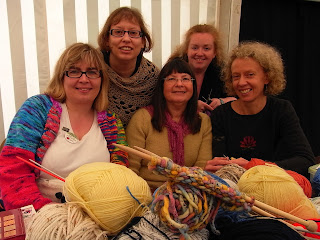 I left after one, as more people turned up to help out on the stand.  There was a lovely community feel to the day, and we chatted to people who had come from very far, but were staying with friends in Kenilworth.﻿
Posted by Stasher at 18:51 No comments:

My own cheese and chive rolls 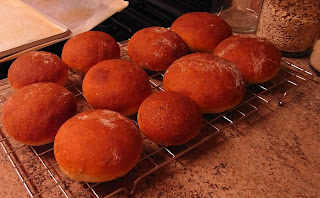 The smell and the flavour of these rolls is quite special.  Mr S was in need of some light and white bread!  So I devised this recipe and they also freeze very well, and wonderful filled with home baked gammon and salad, or with a large bowl of new season asparagus soup.  The chives are lovely and mild and growing well with all this rain.  I've used potatoes quite successfully in the past in soft sweet rolls, so thought of incorporating them into a savoury roll.  I much prefer bread fresh, but like variety, and keep bread frozen for just a week or so.

I used soft goats cheese and goats milk, but I guess you could use Philly and milk

Mix the potato with the milk, add the yeast.  Rub the goats cheese into the flour with the salt.  Combine all the ingredients together and knead well for 10 mins.  Add the chopped chives and distribute.  Leave the dough to rise until double.  Knock back and shape into 8 to 10 rolls.  Prove until well risen then bake in a preheated oven No 7 for 10 mins, and then reduce heat to No 5 and bake for a further 15 minutes or so until golden brown. 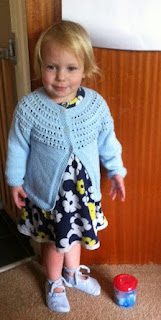 I've just had a phone call to say that the parcel has arrived....and hey presto a pretty pose too.  Goes beautifully with the flowery dress too.
Posted by Stasher at 20:47 No comments: 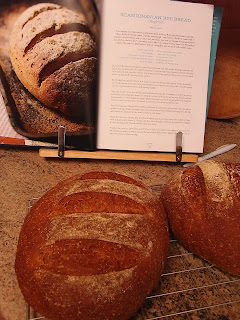 When Nicki raised the topic of Rye Bread and the variations ranging from the very heavy dark rye loaves to the 'rye' breads which contain as little as 3% available in the shops, I 'volunteered' to make her one.  Yesterday I made a couple following the Hairy Bikers' recipe found in their Big Book of Baking.  They have turned out really well, and I am waiting for Nicki's feedback. 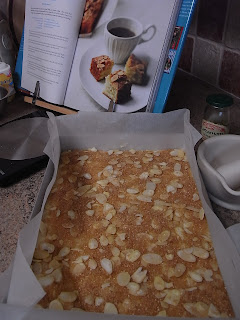 I baked their Cardamom Coffee Cake for the first time a week or so ago, and we are now into our second piece which has come out of the freezer!  Mr S rates this recipe very highly, and so do I. It is perfect with coffee.   When I first made this I wondered what the dearly beloved would have made of the flavour from the cardamoms, and dared not tell what was in it....after all this is a spice I use in my curries and savoury dishes.  Also I wondered what sort of cake it would be, given that it was a batter the consistency of double cream.  This is picture is the cake ready for the oven with the sugar and almonds sprinkled and floating above the batter....  This will be made many more times.

Mr S is spoiling himself again this year; instead of steam engines this year he wanted to drive a Diesel Engine.  Here he is at the end of the day with his cheeky grin which means he has enjoyed his day.  As he booked this course, we planned on exploring the area a little and booked a B & B in Shrewsbury.  We stayed at an excellent place: Anton Guest House within walking distance of the town centre.﻿ 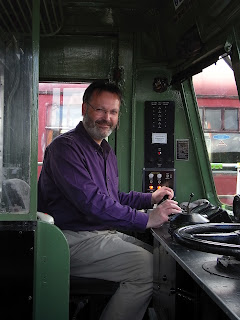 We were amazed by the City, the old part of which is encircled by a wide deep and fast flowing river, with a lovely river side path.  On one of our walks from the Railway Station, below the walls of the castle we took the path right round to the park below St Chad's.  We walked alongside young people being trained to row, with their trainers on bikes with megaphones.  We very nearly missed the delights of the Dingle in the Quarry Park.  It is surrounded by a hedge and fence and when we went through the gates, we found a little paradise. 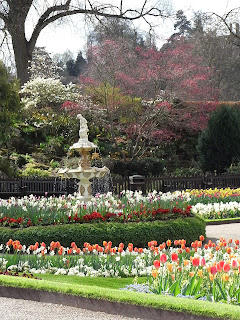 In the very bottom on the garden there is a small lake, with interesting shrubbery, statues and fountains.  I have just one criticism, it is that there were those little plaques with the names of donors or distinguished people.  I would prefer a large plaque somewhere near the entrance saying that people had supported the garden, rather than signs by each and nearly every plant! 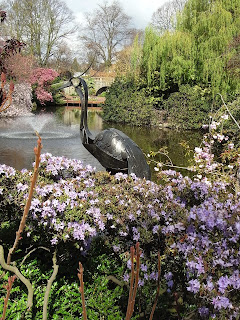 At every turn within the city there were pleasant views, interesting architecture, exciting shops, and enticing coffee shops and restaurants.  We visited St Chad's and stayed for a concert by Robin Ward a Harpist from New Zealand, who even made his harps, later in the days we gazed in awe at some very early medieval stained glass in St Mary the Virgin. 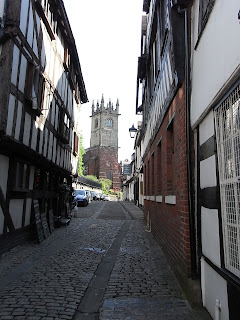 I was very interested in the special exhibition at the Museum and Art Gallery celebrating the life of Charles Darwin who was born and educated at Shrewsbury Grammar School.﻿ 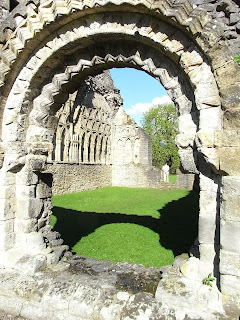 It is very tidy and the topiary in the grounds were delightful. 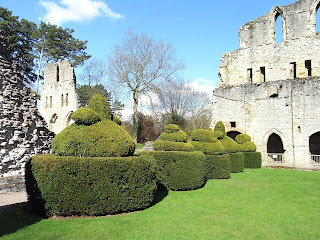 On the Sunday on our way home, we visited Attingham Park, which is just outside Shrewsbury.  We went on the first tour of the day, and were richly entertained by our guide.  After lunch we explored the grounds, and ended up in the walled kitchen garden, where Mr S sat down on a bench, whilst I inspected the wall trained fruit trees, the little piglets, chickens and the bees kept in old fashioned straw skeps.

Their Rhubarb was doing very well! 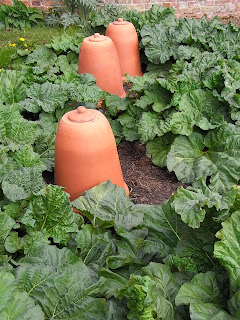 I bought a rhubarb plant and a new interesting auricula to add to my collection.  It isn't named but it has interesting pale leaves with very little meal on them, and the flowers are well shaped with paste around the middle. 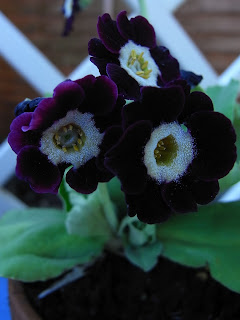 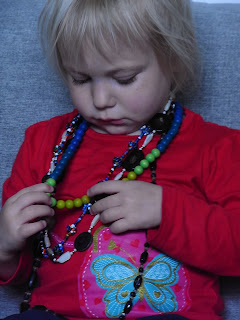 Just how many necklaces are too many?  For each necklace there is a story...but that can wait for another day.
Posted by Stasher at 15:13 No comments:

With new and old baking tins, and old and new recipe books, I've made different types of bread.  The hazelnuts on this focaccia, were a present from one of my husband's colleagues.  I spent some time cracking these sat in the sun in the garden.....yes we had some lovely sunny days before the current spell of rain...The recipe is from Ursula Ferrigno's The new family bread book. 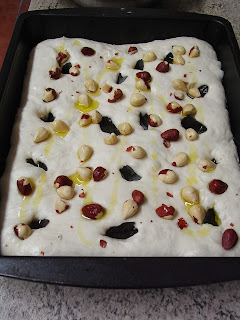 From the Hairy Biker's Big Book of Baking, I made their Rustic Spanish Bread.  I'm reminded of the time spent with Jenny in Spain, when we went on a country walk, and came across a country baker, making bread in a wood oven, ready for the people coming from the cities to stay in their country houses for the weekend. 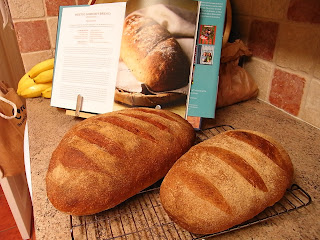 This is the first batch of my own sourdough, no 'commercial yeast' bread, made following the River Cottage Handbook No 3 guides, and my two proving baskets.  I bought these years back, and I remember being so excited about finding them, that I bought more for bread making friends as presents.  Now that bread making is so in vogue they are far easier to get. 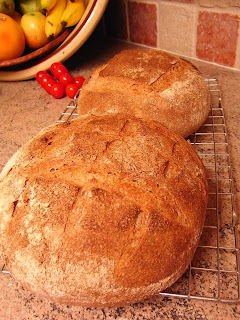 For these focaccia's I had the help of little fingers, it is never too early to involve little ones, and bread dough is very amenable to pulling and pummelling. 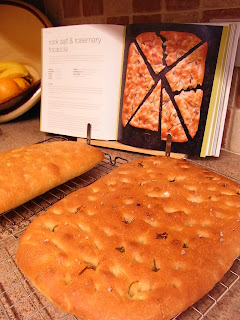 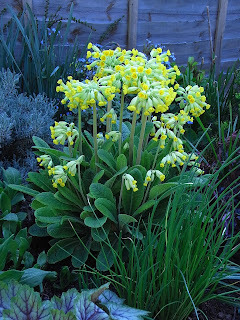 The garden is thoroughly soaked, so I was pleased to have taken a few pictures before the rain. 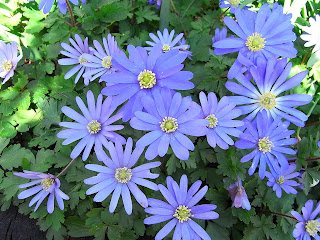 The frosts have taken almost all of the plum blossom, and I am waiting to see what will come of the other fruit blossom.  These flowers of my Doyenne de Comice attracted local bees and insects...after the frosts so they may yet set. 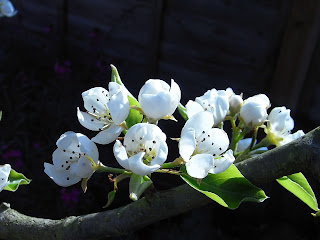 These Dog Tooth Violets, not violets and nothing to do with dogs, except that their bulbs are shaped like dog's canine teeth, are a spring time treat in a shady corner of the garden.  They look exotic with their curved petals. 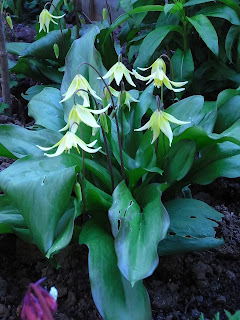