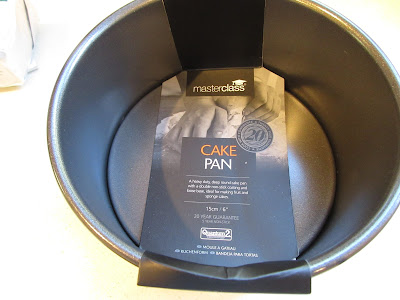 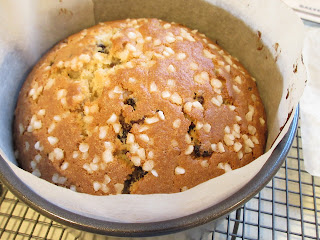 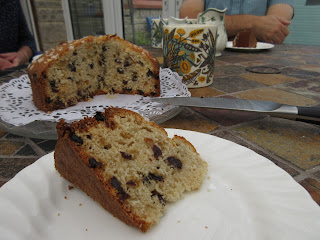 Coffee in Moderation? Kenco decide that people are having coffee in smaller cups

This was what I posted on facebook for my friends to read...its strange this has got me thinking, go to my next post!

I can't believe it!!! Old jar of same Kenco Coffee Instant Rich: 100g 55cups; refill pouch 150g 93 cups, bought only within four weeks or so.
Instantly, excuse the pun, I realised someone got the maths wrong. Should have been 82.5 cups on the pouch. The difference of 10.5 cups is a 12.72%increase.
So I rang the free phone number 0808 100 8787...their explanation is that Kenco has decided people prefer smaller cups!!!
Have you reduced the size of your cups/mugs or decided you would like your cup of coffee signifanctly weaker? Have Jacobs Douwe Egberts replaced all your mugs with smaller versions? At what stage will they bring out a 'smaller jar' with the logo: 'Still the same number of cups'???? But we would not like to give those marketing people another way of increasing profits, would we?
If you have a couple of minutes to spare why not phone them, and ask them this same question? Aren't we all fed up, as consumers, of being taken for mugs?
Please share this, and see if we can put some pressure on firms like this. Wouln't this make a funny comedy number...share with any comedians you know, or cartoonists and if you like send this to a consumer loby group, or even the BBC. 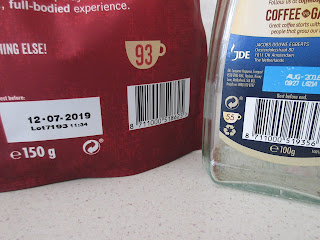 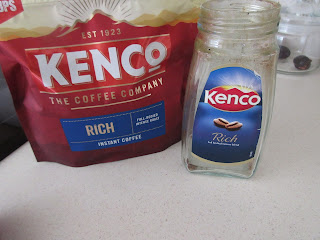 Labels: On my high horse

Another pair of socks knitted from yarn in my stash.  The pattern is called Rock Pool was was published in the Knitter Magazine recently.  Now stowed away in my stash of new socks...my 'being used sock drawer' is full. 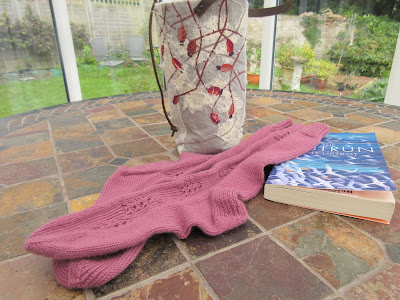 The Caraway Spelt Loaf based on the rye sourdough starter is from Jane Mason's Book: Perfecting Sourdough.  I scaled up the ingredients so that I could shape the dough into 2 loaves in my 500g proving baskets.  The loaves turned out beautifully and one of them came with us to Bath. 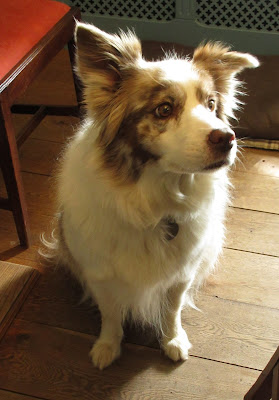 Here is Millie...I am sure she could smell the delicious aroma as I was cutting the loaf to go with our soup.  I am sure that she would not have objected to the caraway seed has she been offered a piece.  Mr S has quite firmly suggested that I use another seed and he said that fennel would do! 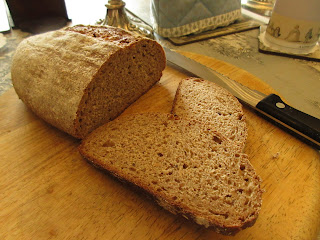 This recipe is based on a rye sourdough starter and is a breeze to make, and absolutely delicious.  It will certainly be in my go too recipes for regular baking.  It is on page 53 of Perfecting Sourdough by Jane Mason and is one of the two recipes this month chosen for the Facebook Group, both based on a rye starter.

This sourdough loaf is particularly easy as there is no bulk fermentation and no turning out from proving baskets.  I have found that reviving the sourdough starter from the fridge, with part of the flours and liquids on the evening before baking, and leaving this to do its job on the kitchen counter overnight, works perfectly for me.

In the morning all the ingredients come together, and after kneading for around ten minutes, the dough is shaped into a round disk, put into a round cake tin, and left to prove.  Maybe because the weather is turning autumnal and a little cooler it took 6 hours to rise rather than the 3 to 5 given in the recipe.  There was plenty of time to cycle to the market and get on with doing some gardening! 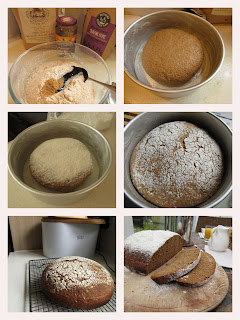 My loaf did not have quite the lovely overall white dusting of flour, so perhaps next time I will sift the white flour over just before baking rather than as I set the dough to prove. As I brought the various ingredients together I wondered what the 1tsp ground coriander would bring as a taste note.  I cannot taste it, but the loaf is so rich and flavoursome, it must have added a layer to the flavours from the wholemeal stoneground flour from Dunster Mill, and the molasses.

Rather than Rock Pool Socks, I think I shall nickname these grape picker's socks.  The grapes on our vine are ripening, not I plan to do anything with them, except feed them to the birds...

I've completed the first sock, with the wonderfully comfortable toe which ends in a seamless tip as a result of the Kitchener stitch which brings two edges together without any bumps...blissful comfort results. 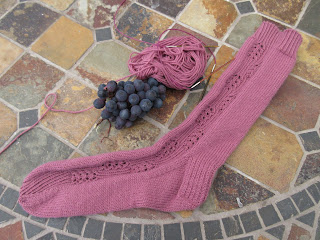 Along the way I adapted the pattern as I do like a longer sock.  I used to use several short double ended knitting needles, but since my knitting friend Ronnie at Kenilworth Knit and Natter started several of us going with short circular needles..I am all for using two needles, and with the sock architecture it makes all the more intricate parts all the easier, as there is no need to place any markers. 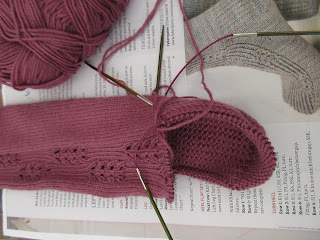 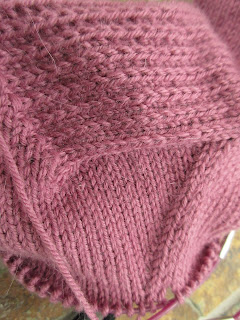 Its easy to check when the decreases stop at the end of the gusset...the stitches on both the needles are equal.

Hopefully the coming week will see the second sock completed.
Posted by Stasher at 13:09 No comments:

In a Vase on Monday - Autumn beckons

After dancing the day away at Dinder Hall yesterday, I was feeling too worn out after four to five hours of prancing around with complicated figures in Irish Set Dancing, to go out and pick flowers.  I had also spent a few hours on Saturday baking for the Dancing session: Pistachio and Courgette Cake, and a fabulous Banana and Spelt Loaf Cake.  In between all the dancing we have refreshments as well as lunch.  Its pot luck, but with around twenty of us, not including the musicians, we manage a lovely spread.  This has given me the idea to take some flowers next time for the tables.  Cathy who hosts this meme has come up with a lovely 'Coffee and Cake' themed post and flowers, so do go and have a look, and see what others have come up with.

It had been raining all day and the flowers were bowed down when I arrived home.  This morning both I and the garden and feeling a lot better....

A small arrangement of a few of the lovely fuchsias with some Japanese grass Hakonechloa Aureola, which is now in flower, but which I haven't really manged to capture with lighting.  I have been surprised by the wide range of bees and bumble bees on the fuchsias this year, and it is quite sad to take a few blooms away from them. 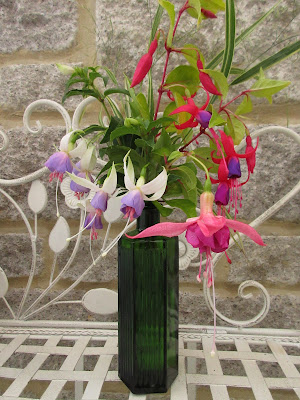 Another grouping of autumnal character, which includes a bunch of purple grapes, not really seen except peeking down on the far left side,  some asters from the front garden, more fuchsias, which have maroon leaves and finer flowers, some marjoram and both fruiting and flowering stems of Leycesteria. 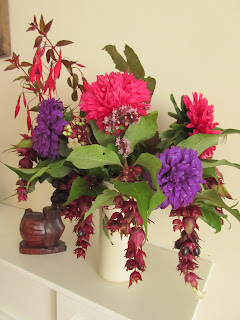 I am cutting some bunches of grapes to leave on the ground for the blackbirds.  After an absence of a few weeks, we have a group of about six around and about.  Are they from one brood or have the migrating birds arrived yet?
Posted by Stasher at 12:32 17 comments: