A large Parma Ham on the Bone

Yesterday I picked up my phone messages, and there was one from MC asking if I would like some Parma Ham, with something to the effect they were going to the shops.....I thought maybe there was a special offer on locally and my friend was offering to fetch me some.

Later that day it turned out that yes some ham was on its way to me, a gift, well its with me for a few days and I can cut off as much as I would like....It started off at MCs daughter's, spent a couple of days at MC, and now it is with me.  Many thanks for sharing this great treat with us..... 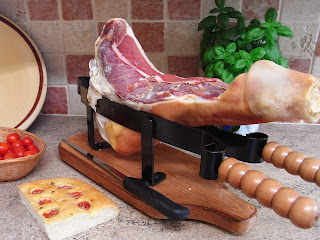 I got up early this morning and researched the best way to cut and keep the ham at its best, how to keep its surface moist with a film of olive oil and sharpened the long bladed knife ready to cut some succulent thin slices for lunch.


The ham tastes wonderful...sliced thinly, eaten with and assortment of chutneys; pineapple and pear and walnut chutney is specially good, oven baked tomatoes, roasted peppers, tomato focaccia, salad and red wine. I can see why Italians love Mostarda di Fruta with their ham. The Spanish too have an air dried cured ham, I've seen the black pigs grazing under oak trees.
Posted by Stasher at 18:55