This is my fourth attempt at Bake No 1....finally with various tweeks, I have a loaf to be proud of.  I am still in correspondence with my banneton supplier, because the one sent although labelled with the size for 1Kg dough, and sizes given...the actual banneton is only capable of taking 700g to 800g dough.  I have been asked to post it back..but really all those miles, and then they would send it off their supplier.  Instead I have sent them pictures with rulers, and posed the basket on scales so that they can get an idea of the amount of cane used in it. I am still hoping that I will be sent one sent capable of taking 1Kg dough.

This loaf is make with nearly 750g dough, and this fitted the basket nicely with sufficient room to prove.  Much of the resting and proving was in the fridge, and from start to finish about 30hrs.  Many of us have found this bread a little trickly, and I think it is probably on account of the spelt content.  A day or so ago, Jane Mason the author of Perfecting Sourdough gave us all some feedback, and I've allowed for these in this loaf.  I also added a tablespoon of carob syryp.

I have Gatissed the top....a new word coined by me in recognition of Carol Gatiss's idea on our facebook page.  The pattern it leaves is delightful, but I must say I felt quite nervous cutting into the delicate skin...there was no rise in the oven until after ten minutes...should one do such nail biting stuff when one is supposed to be winding down during the late evening? 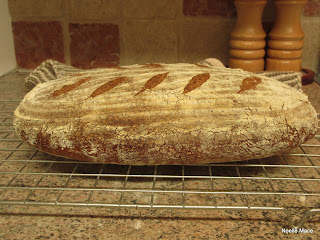 The loaf was out of the oven last night just before 11 pm, and sat on the counter covered overnight.

The Gatissing left the loaf look like an ear of corn! 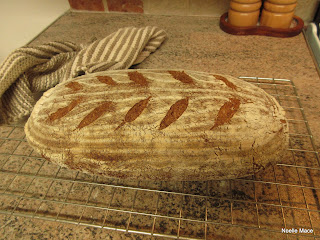 This morning I sliced into it to make Mr S's packed lunch, and am fairly pleased with the crumb. 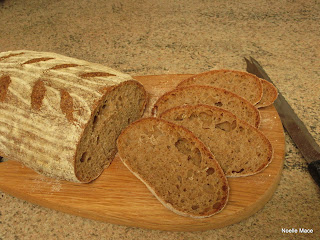 I had the end slice with a little butter to taste the loaf...well all I can say is that I shall have to leave the house for the day to avoid the pull to the bread bin!
Posted by Stasher at 08:57