A visit to the smallest City in Britain has long been on the cards, maybe a little later in the year than we would normally have planned, and finally we made it.

Our 'resting' point for the week was a very smart and well appointed place looking right onto Cross Square with views to the countryside.  From the lovely bay window in the living room, each evening we watched the display as the jackdaws arranged themselves both on roofs, in trees, arriving in groups, calling to each other, and swirling around for the sheer pleasure of flying, against the background of clocks and church bells ringing.  A local artist Amada Wright had a delightful embroidered piece in the Cathedral, and it well worth a peep at her work in the gallery on Goat Street.

What did we do on the couple of wet and windy days?  I had taken my knitting of course....wool, grey like the skies and stones, we watched the wind snatching the clouds across the sky, sat, relaxed, and enjoyed the 'lack of jobs to be done' feeling.

From the Bishop's Palace and the Cathedral set in a valley carved by a fast flowing stream there were many different views and walks... 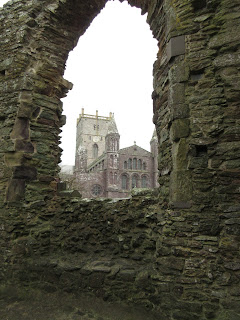 We caught glimpses of lots of birds on our walks: red kites, and the chuffs on the cliffs, along with many sea birds, kestrels and warblers.  I was surprised by the number of flowers in bloom in little sheltered pockets: campions, violets and gorse were quite plentiful.  We caught glimpses of seals along the coast and found a pup snoozing on rocks, I'm not sure whether it was trying to find a comfortable position on the rocks or  maybe it was trying to to rub off its baby fur. 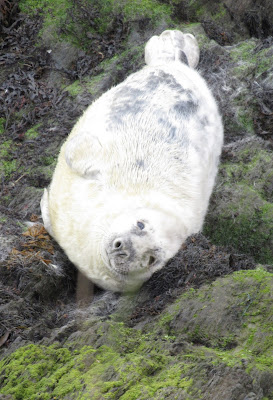 Even though we had two great storms in one week, we had several days during which we could walk along the coast.  Walking straight from St David's we visited St Non's Bay, and walked along the cliffs with fine views of the sea. 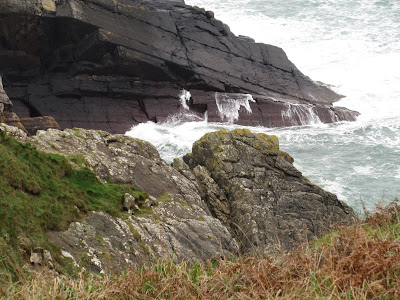 I watched the waves travel up with layer then fall back down like a waterfall for quite a long time . 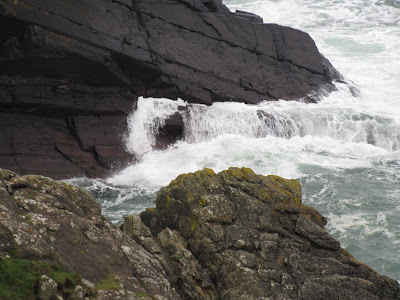 The rocks varied in colour with change of bedding plane angles... 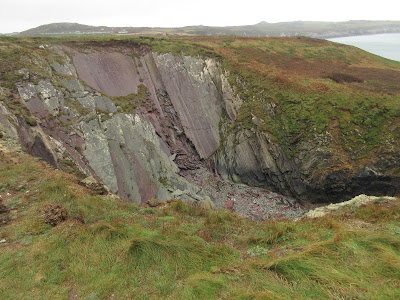 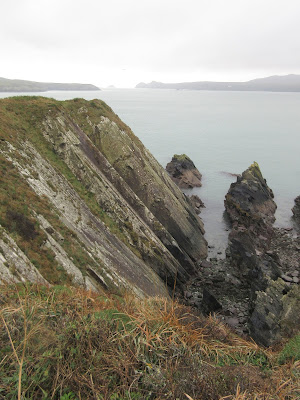 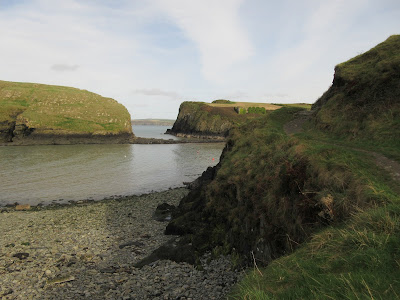 On our little expedition to Melin Tregwynt Mill where we stopped for lunch, we thought we had found the perfect cloth for some new cushions.  Sadly when we got back home the pattern just did not work on our furniture.... 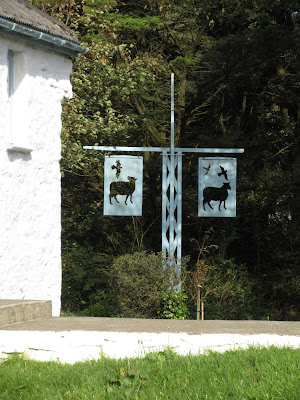 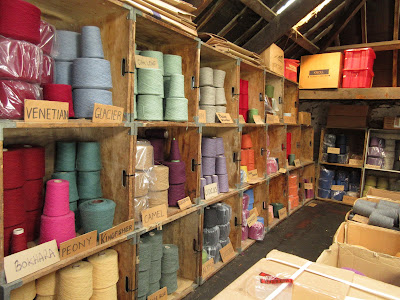 On our way back, we took a little detour, and walked along the coast again to an Ancient Monument: Carreg Sampson 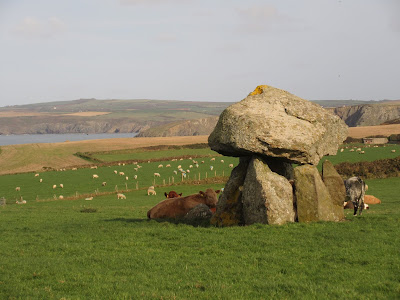 As there were quite a few cattle in the field, some of which were sheltering within the stones, we daren't go any closer and inspect the stones at close quarters!!

On another much wetter day we visited Solva Wollen Mill, and there enjoyed some refreshment.  Having spied a rather interesting Aeonium,: green with narrow purple border, I asked if I could have a couple of cuttings, they were really pleased that I had asked, and were more than happy for me to have them.

We had a long and arduous drive home to Somerset, partly because of the traffic holdups, due mainly to the density of vehicles.  As usual we had a stop at a NT Property: Tredegar House.  We felt it did not quite match the standard of other NT properties we have visited.  Having since read up a little more, I understand the background, and since the NT only took over the management of the property from Newport City Council in 2012, it may change in time.  Going up the stairs I felt it had been used for something like a school, and having read since, that it had been for a time a Catholic Boarding School, it may be interesting if the NT maybe could display some rooms as they would have been set out for the boarders.  It would be well worth another visit...for example isn't this store cupboard in the Housekeeper's parlor a dream? 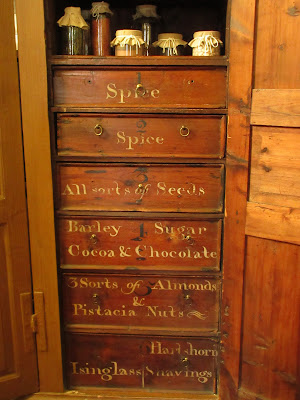 I brought back a selection of seaweeds from The Mermaid's Larder to remind us of the smell of the sea.
Posted by Stasher at 15:42