Last year we had such an interesting day at Kelmarsh Hall, that it was definitely on our calendar for this year. We arrived there soon after opening time and having bought our guide, sat down a while in a tent listening to medieval music whilst we planned our day.

There is so much going on at the Festival of History, all over the huge area ranging from tournaments with Knights, fashion shows with costumes from 55b.c. to the second world war, to music, 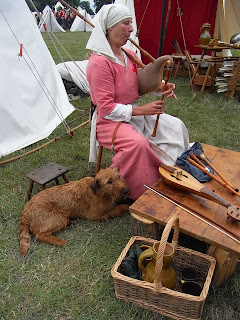 plays, artisans demonstrating their crafts, whole period market etc etc. Mr S particularly loves the festival as there are so many lovely dogs around. Some of the dogs are with the reinactors but many are also just there for the day with visitors. It is so nice to go to days out where dogs are allowed. We once went to the Newbury Country Show when we had a dog, but because dogs were not allowed in, and we would not have wanted to leave her in the car, we simply returned home. I've also just noticed that the musician has a basket almost identical to the one I have had for nearly 30 years! 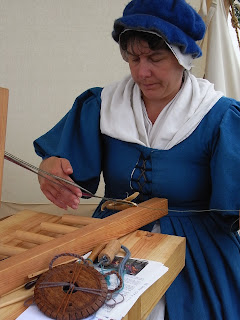 As we walked around, it was a treat to peer into the tents and look at beautifully crafted artifacts. Sometimes the inhabitants were away but when they were ' at home ', they were more than happy to chat about anything which took ones eye. We had seen this Gentleman earlier in the day during the fashion show. In medieval times, his clock fashioned from cloth of gold would have cost the same as a small town's construction cost. This cloak was made from gold coloured silk hence no securicor in sight! 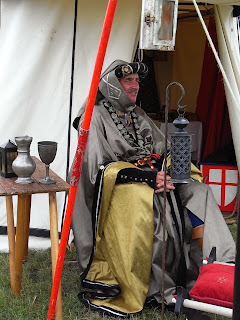 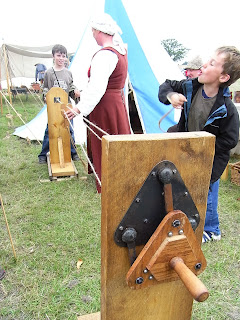 All in all, a very interesting and entertaining day out. We ended the day waiting for the bulk of visitors to depart, having bought ourselves some drinks, we passed our last moments at the Festival of History listening and dancing to the very good Fab Beatles. Jenny and I got up and danced to some of the hits of our younger days! Are we living history? I suppose everyone is.