One of my Mauritius childhood memories is that of listening out for the call of the 'marchant de macatia coco'.  Even as a small child I was drawn to things yeasty.  In the heat of the afternoon, soon after the rains had stopped, we would hear his bicycle bell alternating with his call.  It came over all clear, as we are talking here of the time when the bicycle was king, before the drone of moped or other motorised vehicle.  If there was no home baked goodie available I would beg the few cents needed, and run out to greet our peddler.  He would open his box, and the smell of warm yeasty buns could not be resisted.  The buns were not really very sweet except for the little blob of sweetened coconut in the middle.  They went really well with the Vanilla Tea the maids used to brew up in the afternoon for themselves.  So often I would get a couple to share in secret with Simone or Marie.  Mum preferred Bois Cheri or some other standard brew.  Now that I think about it, this is one of the indulgences I was granted when I was at home just with my father, when the rest of family went travelling to England.  Its amazing how much sweeter food is these days, I realise that even over the last few years food has been getting sweeter, more sugary and  sticker.

I had been thinking about these buns for some time, and I was immediately drawn to 'Sweet Coconut Rolls' in The Great British Bake Off: How to Bake

The rolls are not quite like the ones I used to have, maybe even better...I enjoyed using the technique of spreading the filling over the rolled dough, then cutting to the middle, and rolling it round.  I shall try this out with other fillings. 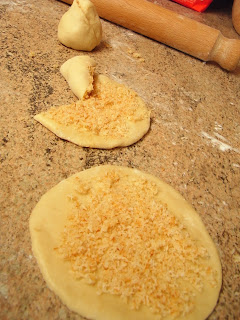 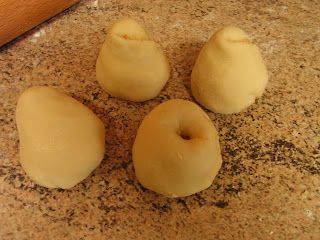 Then baking...I took some round for MC, a Mauritian Friend equally keen on baking, who found it delicious. 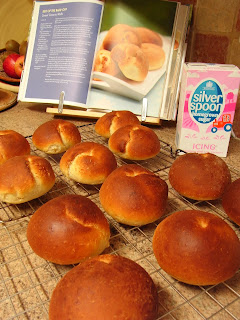 I froze some, and reheated for sister arriving from afar, who also rated this highly.  This is the first of many batches....  I had one of mine, sliced, buttered and topped with pawpaw and vanilla jam, really decadent, real treat.