I have real angels in my life, they know who they are!  I also love  looking for and at angels in any form: whether depicted in ancient manuscripts, or carved in stone, or sometimes just the face of a kind person.  On my various trips around towns and cities, in any country, my eye is drawn to them.

There is so much to look at in and around Wells, where we are now settling down, and starting to get out and about, in between various refurbishments projects around the house.

Mr S and I popped into the Wells Museum just for a short visit.  We have joined for the year, so will made further visits.  Up the stairwell they have a few old statues from the Cathedral: 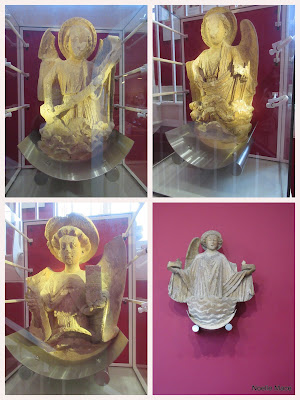 As we were leaving the volunteers on the desk were pleased that I had admired the angels and said that if it is Angels I am seeking, what did I think of the art exhibition?  We had not looked in, so quickly turned back.  The Exhibition called Sacred Places and Divine Fragments showcases the work of Elizabeth Hand and Derek Nice.

Here are just a few of Derek's Angels 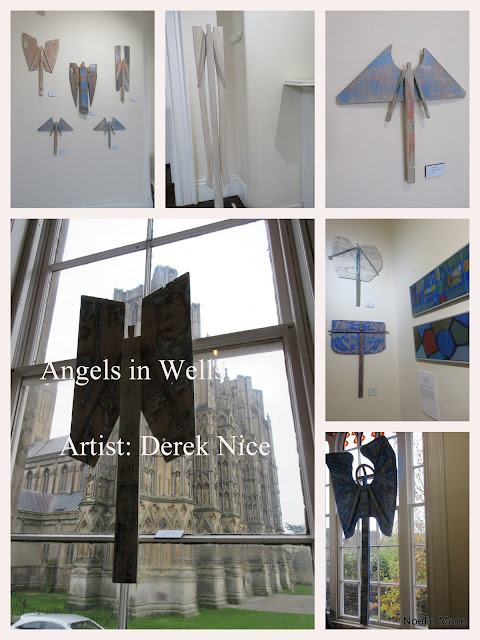 Liz Hand invited us back to their special opening day on Saturday, and although it was raining, I made a special trip back into the centre, as I wanted to have a look again close up and in detail at all the works.  It was lovely to meet and speak with Liz again, and be introduced to Derek and his wife Mary.  I loved the way that Derek has used old pieces of timber and made angels in all shapes and sizes...and quite masculine angels too!