In a Vase on Monday - Good enough to Eat

Its with apologies that I post yet again a simple vase.  The garden is not quite planted up with the permanent shrubs and perennials which no doubt will find their rightful place in the next few years.  The vase was made up in a rush on Friday evening minutes before friends arrived for supper.

It was a supper for 'new' dancing friends Peter and David, and as Peter's wife is vegetarian I decided to make everything suitable for the entire company.  I even wanted the flowers to be edible hence the nasturtiums.  I had sown the seed collected from my previous garden rather late in the year and these are just starting to flower, and they could be cut down any day by frosts.  In the meantime lazy slow bumblebees are collecting nectar from these. 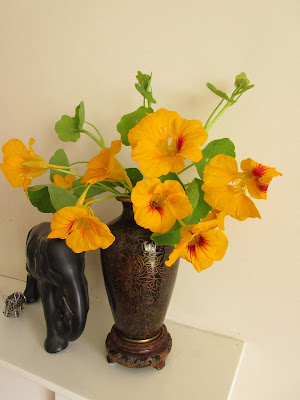 After a celeriac and cider soup, the main dish was a quinoa 'rissotto' if there can be such a thing, maybe it should be called a quinotto, with quinoa grown just a few miles away, with pumpkin and smoked chestnuts from Madeira, pumpkin seeds, etc....with a side dish of braised swiss chard from the garden, with whole orange sicilian almond cake to finish. 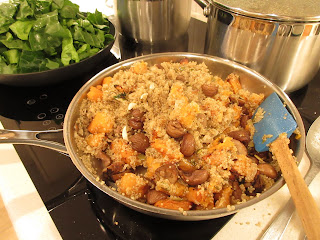 I had been in a quandry as to what to make until I was inspired by another Friend and blogger's post about her pumpkin rissotto. 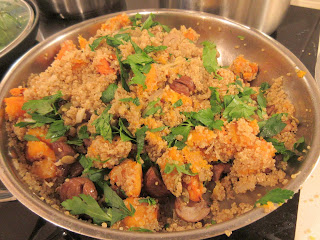 I wonder whether Cathy would like a dish like this?  I can't remember what I made for lunch when she and the golfer visited my garden in Kenilworth?  Cathy is the person who each weeks leads us gardeners and In a Vase on Monday posters to join together.  This week her arrangement is based on Persicarias.  I hope that like me you will visit her page too, and that of other friends to see what they have posted.
Posted by Stasher at 12:59