In a Vase on Monday - May

Walking along the small lanes yesterday, the white froth in the hedgerows has coincided with the warm weather beautifully. The white froth  is from the cow parsley all along the road edges and the hedges.  The May I love so much is the Hawthorn, I also love the month of May as the wild flowers start their displays.  From the plane, coming in over Dover, I watched the white lace trimmings to the fields  and from the small  May trees which have been allowed to grown up along footpaths, on commons and in spinneys, and felt I was back in the country I love so much.

I have often pondered the saying 'Cast not a clout till May is out'. Is it the month of May or when the Hawthorn blossom is out?  Each year I consider this, for me the blossom of the Hawthorn Tree is the signal that winter is truly over.

Being of the more fragile sort..haha, I do wear clouts...several layers.  My Grandma from Lincolnshire used the term clouts, and it seemed that with cold winds off the North Sea, several layers were needed.  Down in Somerset two or three are sufficient.  I actually prefer the more temperate temperatures, but for now with the high temperatures, for me that is, I have cast my winter clouts.

I have not used any May in my arrangement....instead only two elements.  Both are 'rescued' as I tidied up the garden.  On our return we found that the stone wall at the end of the garden was in the process of being repaired, without the several weeks notice we had been promised at the beginning of the year.  Anyway, I console myself in that once this is complete, I shall have no more size 10s trampling shrubs and flowers.

Red Peonies and the lovely shiny new leaves of Mahonia: 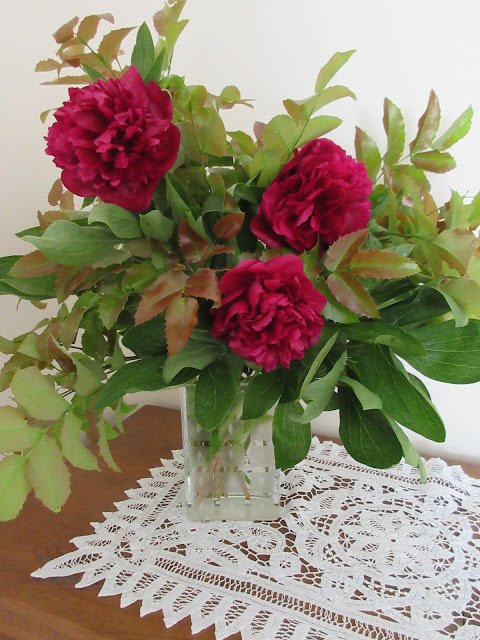 I had moved the  peony  last summer from the site on which we erected our shed to a position close to the wall..I have at least six large blooms and lots of leaves.  I may have to move it a second time!

Cathy who hosts this meme has come lovely blooms...my one aquilegia plant was completely trampled under, in any case it must have hitched a ride in the pot of another plant brought from the last garden, and I had no idea what it would have looked like.  Do go and have a look at Cathy's arrangement, and if you have time others linked in will be well worth visiting.
Posted by Stasher at 09:37