Bed and breakfast with a view 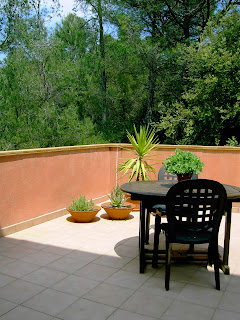 Here is the picture of Jenny's terrace, her house is over three floors and there are magnificent views. David and I spent a wonderful five days with my sister in Gerona. The five days together were fabulous. Although we had left very hot weather in the UK, it was cool and raining in Spain, on the same lines as it had been in Morocco, but as the days past it improved a lot. Jenny took us for alovely drives and we walked along the coast to see the breakers crash on the shore, which is pretty unusual for the Med.
Jenny's house is almost the last house out of Gerona and butts onto a pine wood which forms part of a regional country park. Just five minutes walk away we found lovely orchids, honeysuckle, broom, and just by her balcony we were serenaded by nightingales. We walked from her house along a lovely valley into the heart of Gerona right behind the Cathedral.
Jenny has now two paying guests with her for several weeks: one from Greece a Professor seconded to the University, and a 'lad' from India who is enjoying being looked after by an English speaking 'auntie', who also cooks him vegetarian meals. He is over in Gerona as part of his degree, and is spending some of his weekends joining up with his friends who are doing similar graduate secondments around other European Cities. 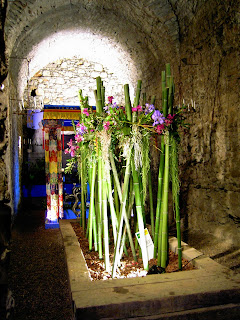 The flower festival in Gerona impressed David and for me it was not quite up to what it had been when I last visited. but still awesome, and wide huge variety and spread right across the city.
The festival is also an opportunity for the very generous citizens to open up their private inner medieval courtyards and one can just visualise what life had been like there centuries ago. The local Museum in the city offered further insightes. We also had some delicious lunches out, and other walks in surrounding medieval towns.