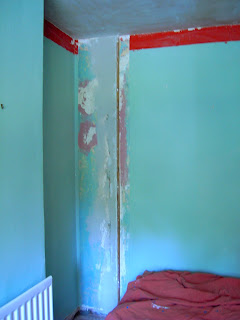 I haven't taken many pictures of the before but here is one of the corner of the bedroom. There was a hideous edge here just painted over. The house forensic person worked out that there was probably once a cupboard in the alcove and when the framing was removed, no one tidied the edge up. David made a lovely plaster repair and here is the surface ready for papering. When this picture was taken we had spent at leastthree days getting to this point. David had removed all the old skirting boards, and I had scraped the ceiling paper off.

Actually the paper almost fell down, but beneath was probably the original layer of distemper. It took more buckets I can think of to wash the stuff off. Whilst I was cleaning the ceiling down, I also removed the red and gold frieze which we realise had been up before the room was painted blue, the room had been red before.

Another first for the Mace refurbishers: putting up ceiling paper. Well it is pretty difficult and our antics reminded us of a Laurel and Hardy film, well I put the floor cloth in the bucket of paste, and I nearly stood in another bucket. Today we seized the ceiling first then cut some strips trying to match up the pattern. By the end of the day we have covered more than half the ceiling and done a pretty good job too.

We celebrated our success with a fish and chips supper. The portions are so big however that we share a portion. Tomorrow is another day and hopefully we shall have finished papering the ceiling. We've decided to get decorators in to do the living and dining rooms.....hurrah!