This Christmas, I sway between a buy the whole thing ready made to I could make that myself. I was going to get the Christmas pud from Miles at the Kenilworth Market thinking I was too late to make them, but then I read on Mandy's blog that she had only just made hers.

I went through my stash of ingredients, and I had all the makings ready to hand....but then, what to to steam the pudding in? I had a pudding basin but the recipe quantity meant that I would have to get another basin, and make two.
Having consulted various well know authors, I make up my own reducing sugar but adding grated apple and sherry and brandy, rather than barley wine etc., which I did not have to hand. I then calculated the total weight and decided to half the ingredients. Having followed the instructions, which said mix one day and leave to mature then cook the next, led to a 3 a.m. eureka moment: there were the small dariole or similar moulds, which would make individual puddings. The other bonus was that the smaller puddings would take a lot less time steaming, and reheating! 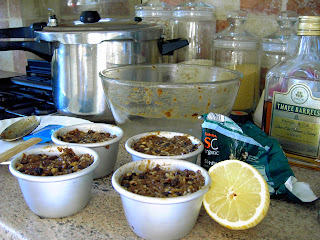 When I was up in the London with Vickie, the subject of pressure cookers came up. I wonder whether Vickie will be getting one this Christmas? I love mine and use it frequently. I have a Prestige Cooker which was a wedding present, which I have used ever since for things like stock, soups, steamed puddings, cooking fruit under pressure then boiling up jams and marmalade's but the later without the weights and using the large pan as preserving pan. I prefer to steam veggies and use the oven for meat.
I experimented with various ways of tying down the baking parchment, and I'm pleased to say all worked. The pudding are now maturing in a dark, cool place, and will only take 10 mins to reheat in the pressure cooker. 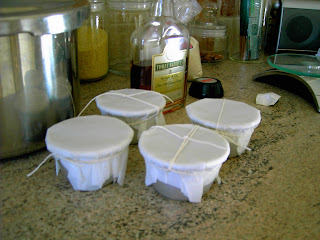 For my benefit, here is the recipe ready for next year:

Mix all items, and leave covered. Mix several times before cooking the next day.
This quantity makes up four individual puddings 6oz each.
Posted by Stasher at 11:34