Payment for the Litter Pickers

I had persuaded some local kids to tidy up a bit. How mean can you be! I noticed that litter had started to show up in the street, and on the island, and this irked me. I've been picking it up, in the absence of the usual street sweeper. They don't seem to be in our area, despite my noting this up at the help desk in Kenilworth Library. I also noticed that quite a bit was coming from a particular house, I think from the recycling containers which were spilling out.
It came to me to 'educate' the kids and perhaps their example would then 'educate' the residents to keep the area tidy. They did a grand job, and this kept the children busy at the end of their Christmas holidays. Over the next two days, I had several rings at the door, when their bags of litter were displayed for approval. When I said that I was finally satisfied and said how nice I thought the road looked, one little chap very nicely asked if they were to have a treat. I tried to explain that living in a nice and tidy street was a treat enough, and they seemed to appreciate this.
The following day when I spied that they were still keeping up their efforts, I relented, and suggested that perhaps a few cakes would not go amiss. The three children squealed with delight, and even more when I suggested they may like to decorate their cakes too. However, I did say they were to ask their parents to give me approval, and with that in hand, a date after school was agreed. I remembered that Veronica & Matthew had given me a box of letters as part of my cup-cake kit which was my birthday present. 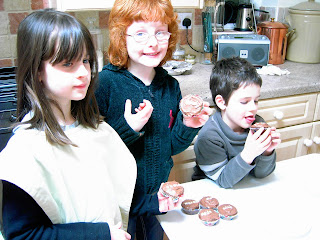 Not only did each of the Litter Monitors go back home with their own personalised cup cakes including one for their mothers, they wanted to make one each for David and me. 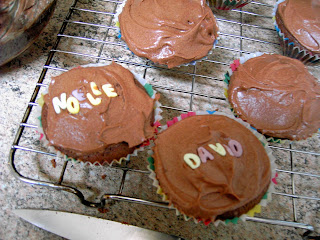