Yesterday at 5:30 a.m. I seemed to sense that it was snowing. I peered through the curtains trying to make as little noise as possible and outside was a winter wonder land. I was so excited that I just couldn't sleep. As soon as it was light enough, I took this picture as I went outside to put some food out for the birds. 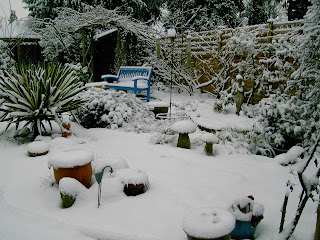 By the front door, the snowdrops caught my eye. 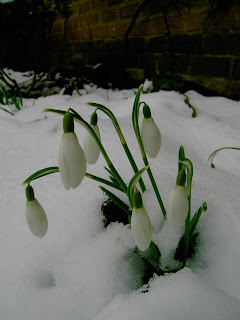 Having done most of my chores before breakfast, I was out early to do my shopping. I had listened to local radio and with the Weekly Kenilworth Market being cancelled, I needed to go to Sainsbury's to stock up on Veggies etc.
Along Warwick Road there was a procession of people heading towards Abbey Fields with all manner of sledges. The atmosphere was one of glee. I imagined most people had phoned into to work and claimed a holiday rather than risk the journey to work. Mr S had got up early and I had enjoyed helping to clear the car, and sent him off to work with the garden spade!
Children were enjoying their day off school and several large snowmen had been built. Not all schools in Kenilworth were closed though, however the Headteacher at Clinton Primary School just round the corner from us challenged the children to a day of fun building snowmen in the playing fields. Along our road, there are some excellent specimens. 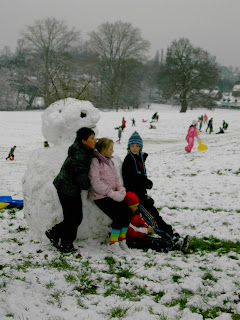 On Abbey Field with its lovely slopes there were crowds sliding down the slopes. Knowing how the wind blow the snow, I realised that it would be thicker on the other side of the park where slopes are steeper too. There were fewer people there, and, so suggested to some young people that they try it. After a few minutes I would see them enjoying themselves though I think their climb back up to the top would have been harder. 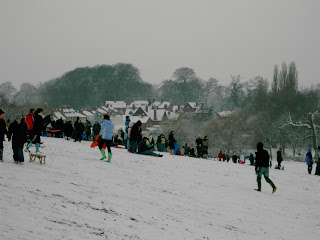