Etoile de Hollande in a posy

When we moved here, the back garden was demanding to be tamed. There had been some very good design work, and planting, but once it had been done, I reckon about eight years previously, nothing had been pruned or much gardening done. A large Eucalyptus and several large leylandii which must have been planted over 20 years previously were completely out of scale with the garden.
Three years on, many of the very overgrown plants have been tamed, and the large eucalyptus and several large leylandii removed, as well as some tired overgrown shrubs. Now the air and sunshine have penetrated the garden. 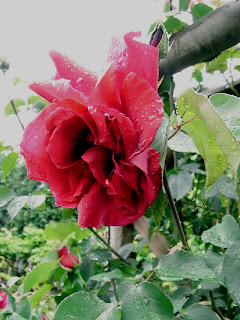 One of the plants to thrive is a large and strong red rose growing over the arch leading from the patio to the main body of the garden. After a bit of research I found its name: Etoile de Hollande. It grows strongly, and because it is very healthy, can cope with the greenfly and any blackspot. I watch out carefully for the first greenfly, and if they are not being checked by the ladybirds and blue tits, then I might just finger crush any I find, and any leaves looking like they are starting to deteriorate are quickly picked off and binned. 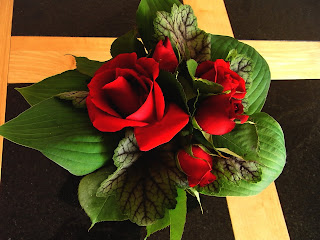 As I wash up and glance out of the window, the rose covered arch frames the view of the garden. Usually I slip out there very early, still in dressing gown to inspect the garden whilst it is still fresh from its evening slumber. This is the best time to pick flowers, whilst they are cool and covered with dew. I love making up little posies, and this Thursday I tied this one, using heuchera and hosta leaves. I took it to the Knitting Group at the Almanack, where it was handed over to Mandy as her birthday posy.

Since I wrote this post I've been looking for another word to describe the posies...they are also called Tussie Mussies. This was the word used at the American Museum.