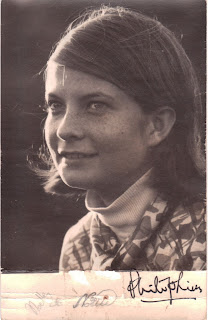 Recently there was an evening at the Kenilworth WI, where we were asked to take along a photograph of ourselves as a child, and the idea was for members to match them to the member. As I was not able to go to that meeting as I was on a course at Denman College, I had passed a few photographs to Margaret, who was organising this asking her to select one. There were not many taken of us as young children, anyway not many that had survived the traumas of tropical weather and insects, so I chose to include this one, which I had taken from a picture frame which hung just inside my mother's sitting room. When I had taken it from the frame, I also found Philip Lim's signature and my practice ones as a young girl.
When the photograph was returned to me, it was with admiration for the quality of the photograph, and knowing that there are some excellent photographers in the group, it took me to remembering Philip Lim.
I shall post more on this topic later.