The Great Stasher Bake Off

Its great to see baking coming to the fore, and I'm enjoying the Great British Bake Off. Mr S loves lemon buns, and I usually get them ready baked from Sainsbury's. With the quantities from the internet I made twelve pretty large buns. I think making eight would have been the size buns one would feed to the elephants at the zoo. At least when I was little you could feed buns to animals in the zoo, now I am sure it is a nono. I decided to ice only six, and having given some to Lita and daughter to sustain them for long car journey, left some for Mr S for Friday and Saturday. They are a sure winner. Shame I am currently off wheat at present! 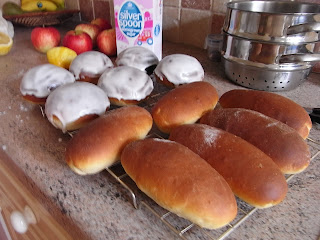 Then without thinking to check the recipe for Paul Hollywood's loaf on line, I decided to go back to basics and follow the recipe exactly as in the book, which has been on my shelves since it was first launched....it gave 1 tablespoon salt to 500g...I read and reread, but decided to stick to what was printed. After all one of the sure comments on the programme that there was not enough salt....so the loaf baked beautifully but the taste was far too salty. Hummmm having just checked the BBC website, it gives 2 tsp salt, thank goodness for that, I was thinking that new fans to bread making would be suffering for an overdose of salt.I've tried many of the recipes before but always altered the salt down to what I think reasonable 3 tsp for a kg of flour, 4 tsp at the most. I wonder whether this was an error throughout the book, and maybe it has been corrected in more recent editions. 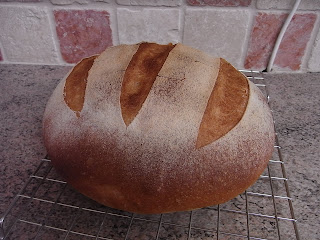