As we were having breakfast this morning...Mr S suggested a spin out in the car. We had been meaning to go to the outdoor market at Wellesbourne...so we sallied for. No market, it is held on Saturdays, so having our NT cards on us, we drove round to Charlecote Park, and after a look round the garden centre, joined the early entry into the park and gardens, and found a stone bench to sit down and look across the Parterre, which is just coming up to its best with a wonderful display of tulips. 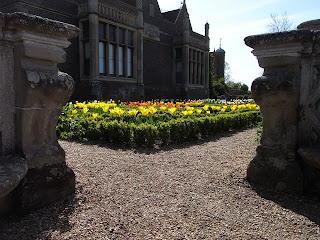 We walked through the woodland garden, then went back to the car, and having spotted that Charlecote Water Mill was open, decided to drop in there.

John Bedington the miller, whom I'd spoke to soon after coming to Kenilworth, was there supervising the milling. I used to get my flour from Shipston Mill, so maybe I have a new local supplier. I have brought home two bags to test bake. It seemed that there was a large band of helpers from other mills there, learning on job, and also dressing the stones by hand. It was wonderful to feel the wheat as it came down the shute from the stones above, warm and silky smooth, the bran having been ground down finely. 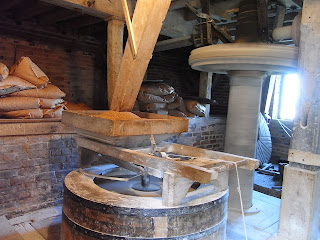 On the top floor, which we climed up via a very steep ladder, to which the sacks of grain are hoisted, and from where the grain it poured into storage bins, which feed down to the stones below. I couldn't resist telling John that my great great Grandparents were millers in Lincoln, their mill at Wrawby near Brigg has been recently restored. When my Uncle Noel took me there to explain some of the family history, it was not open to the Public, but I would love to go there some time to see it working.