One of my weekly volunteering 'jobs' consists of spending time choosing books for people:  just a lovely way of spending a few hours.  I work alongside professionals and other volunteers.  I love books, and get to spend more time looking at books generally than if I were to visit the library perhaps once every other week.  When I handle books I'll of course have have a quick look if only to know where to place them.  I was tidying away a whole batch of large print books which had just come back from a nursing home, when my hand fell on a small tome called 'In my Garden' by Christopher Lloyd.  It had no pictures, but small articles.  Of course I had heard of Christopher Lloyd, and had recently seen a piece of archive footage of him in his garden in at Great Dixter, but I had never read any of his work, and decided to bring it home and give it a try.

What a discovery it has been!  I completely agree with the note on the back cover that his prose is exciting, his knowledge vast, his ideas are provocative, and he makes one laugh out loud.  As I read the book, I have a heavy book open alongside: The RHS Gardeners' Encyclopedia of Plants and Flowers, so that I can quickly look up the plant he is describing. Its not a recent edition, (1990), nearly 25 years old, which I picked up in one of the local charity shops, but it is post dates most of the articles in this book.  I wonder whether there are any present day garden writers of Christopher Lloyd's caliber, and as readable and entertaining.  I picked up some recent RHS magazines and felt the writing style was so very different.  Just as when I was reading the Picture of Dorian Gray recently, I feel that there are so many quotable and memorable passages in his work.  I must start to make some notes, as these would make excellent small extracts to write onto bookmarks etc!

In my garden over the last few days, it has been bright sunshine one minute, and thunder lightning and heavy rain the next.  I brought in a few stems of Grace which I moved from its pot where it had been growing for two years into the border by the patio.  It is a little lax in its growth this year, no doubt due to the heavy dark weather we have been having, and I had staked it with some short bamboo canes.  I have a clump growing just behind the gazebo, and thinnings come in handy for this.  I laughed when I read about Christopher Lloyd's views in 'Stakes on the Future'.  The leaves of Grace are a little pale, no doubt many of the nutrients have been washed down deeper than the roots.  I used Epsom salts a couple of years ago, and will try these again, as well as some more of David Austin's rose pellets. 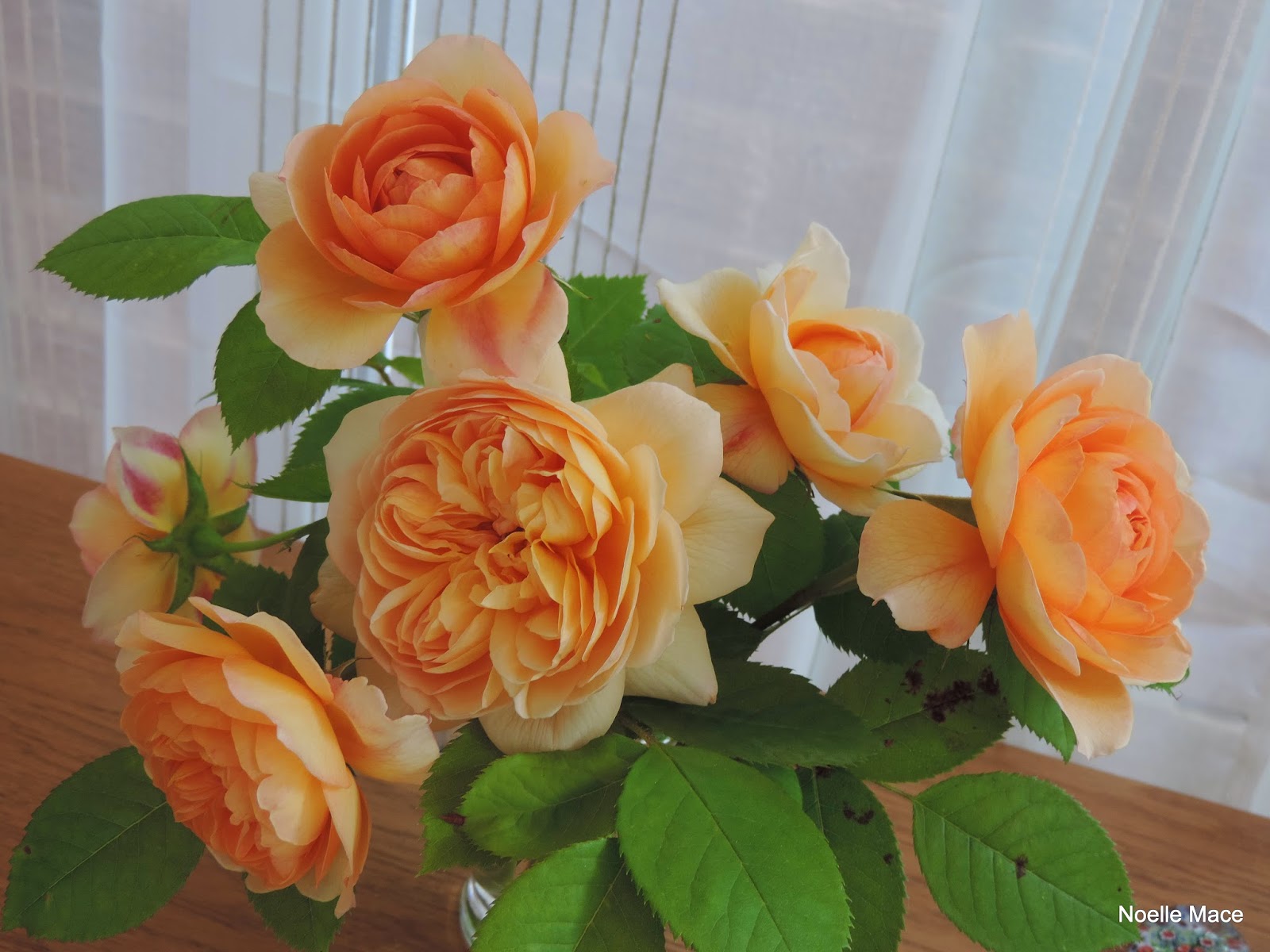 I planted seven new rose trees last November: Munstead Wood, Gertrude Jekyll, Princess Anne, and the following climbers: A Shropshire Lad, St Swithun, , Crown Princess Margareta and Claire Autin The first to flower is Gertrude Jekyll.  I've snipped off all the flowers, hoping the plant will make more growth in its first year.  I'm not that happy so far with most of the plants, but there is time still, and it has been an odd growing season.  I think in future I shall buy potted plants in the spring rather than bare rooted plants.  They looked pretty strong and I planted them in well prepared soil, in good weather the day after the arrived, and they have had plenty of water. 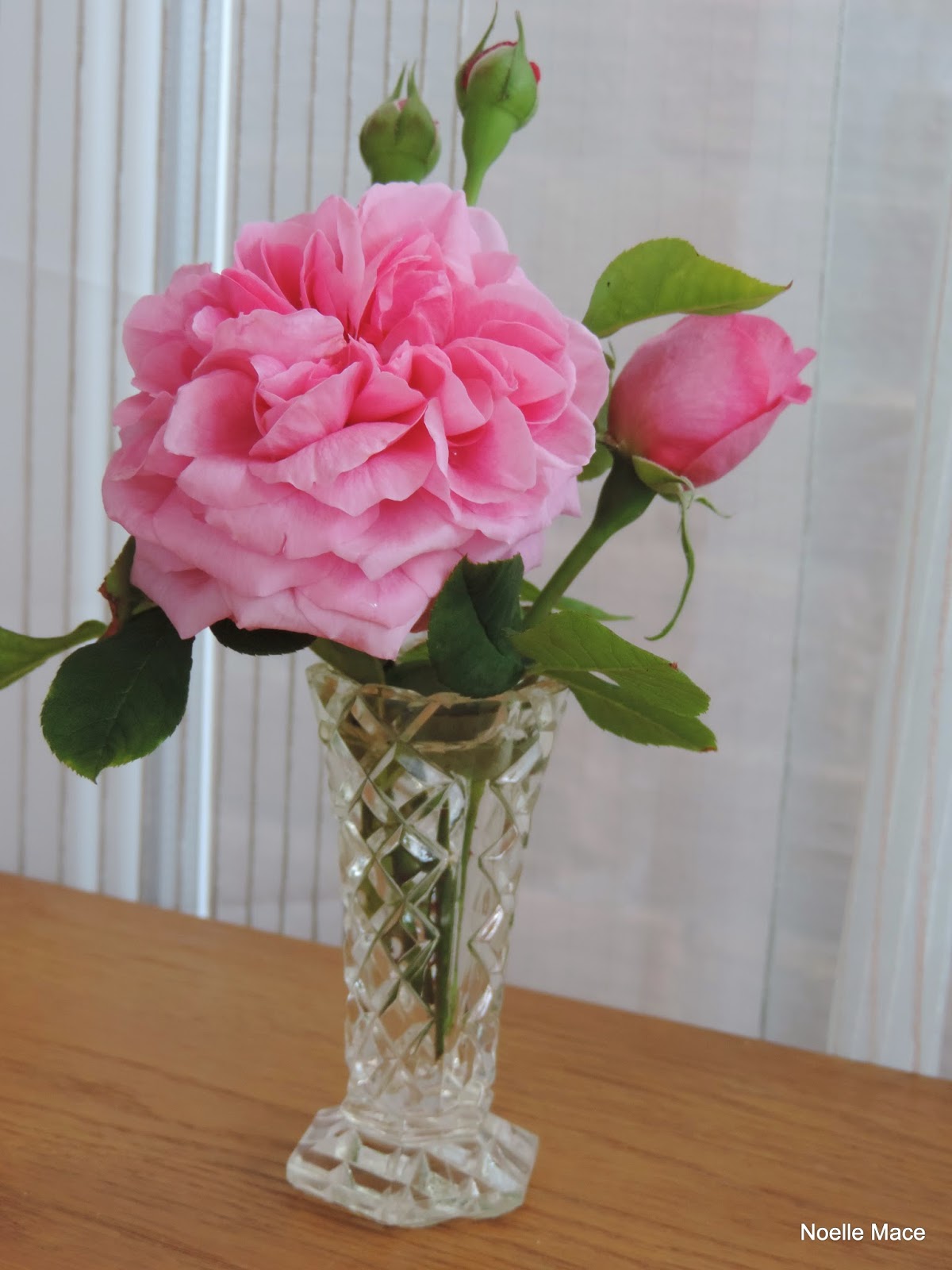 The scent of this Gertrude Jekyll rose is like old rose perfume, and I've put this little vase in the bedroom.

Izzi and I picked a large bunch of roses from the Etoile de Hollande for her to take back home on Saturday, and with the very open blooms, which will not last more than a day, we picked all the petals, and lay them out on the table in the conservatory to dry.  I am gradually collecting a large bowl full.