The feather structure and effect on this shawl I have just finished is achieved by the 'short row' technique, taking 3 balls of grey for the background, and two balls of wool which is spun using different colours which gradually blend from one colour to another.  I bought this 'Dream Bird' pattern on line  have been delighted with it.  The colours of the feathers are more vibrant than shown here. 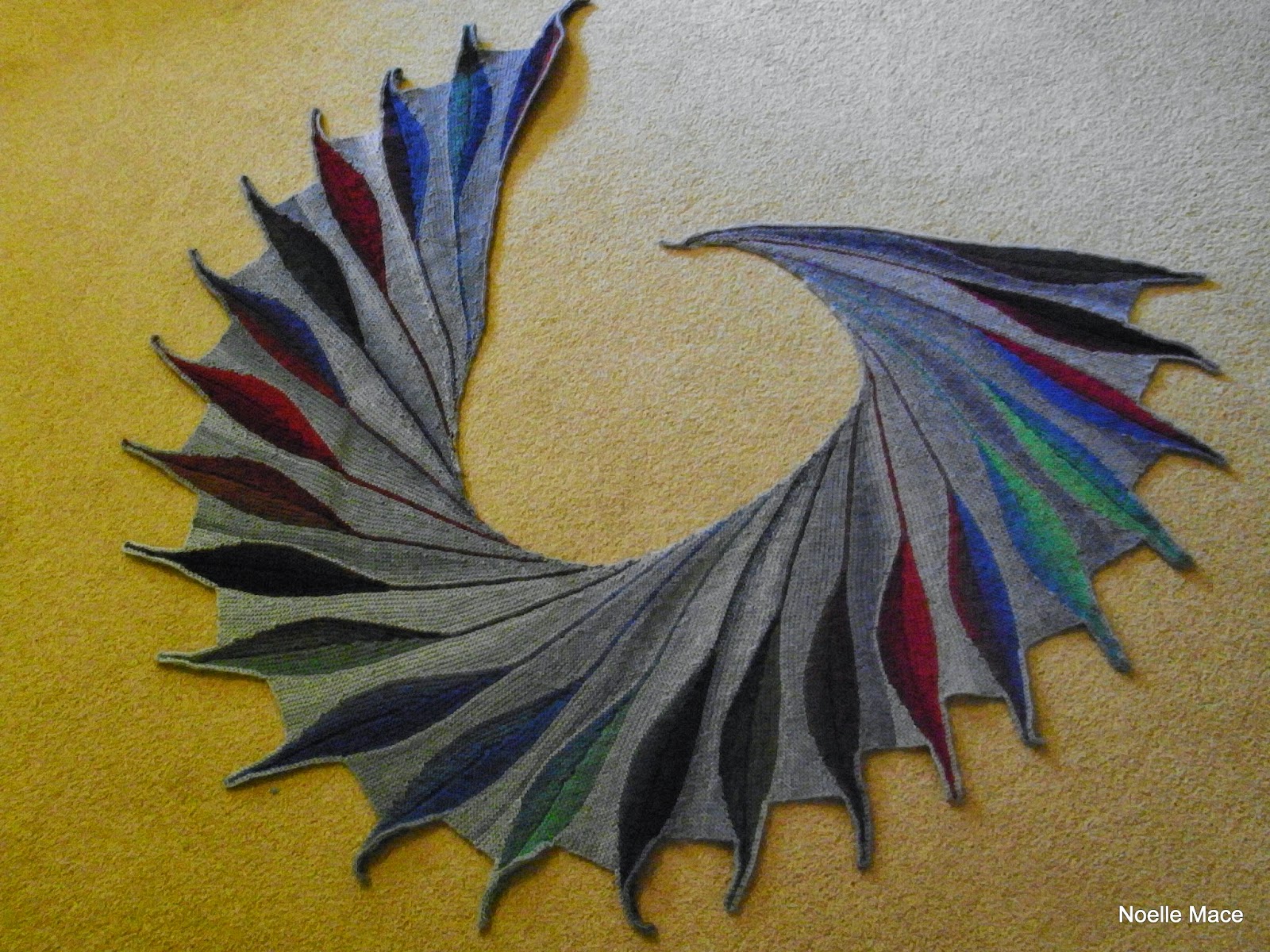 I've spent the morning doing something which has been on my to do list since late last year.  I feel wonderful now that it is done.  My desire to get this done was spurred on by my 'indebtedness' to my beloved.  We don't keep scores, but I was just so grateful for a couple of things which were resolved last week that I wanted to 'give' something back: one pair of brand new trousers re hemmed to made them longer which involved sewing on some bias binding then hand stitching.  The other 'stitching' job was the repair to the bottom of some chinos.  Personally I do not get this thing that trousers should very nearly touch the ground, which means wear, and dirt, and also when you don't wear shoes in the house and constantly walk on the backs of your trousers, they do wear out!  We have decided that Chinos can have three lives: first with turn ups, and then without turn ups when they are worn down, which I get to make about 1 cm above ground level and finally as shorts!

What was I grateful for?  After I washed my bike on Saturday, using rubber gloves, some brand new break-pads were fitted and everything oiled and whatever needs doing when a push bike is serviced.  I know I ought to learn to do this myself, but I usually end up with a tear to my skin, bruises and sometimes tears.  One sad thing though, on the crowded Patio a large branch of one of my succulents was broken.  But the good thing is that I think it will be too big to spend its next winter in the consevatory, so I shall material to make many plants.  If anyone would like a grand daughter of the lovely honey smelling Aeonium which I brought back from the Isles of Scilly, do let me know.

The second matter was concerning my cooker.  A free standing gas Rangemaster 55 had been left at the house, and since the buyers of our last property specifically asked that I leave my lovely cooker there, this was gratefully accepted.  When I started with my Piccalilli on Thursday the oven would not light...but I did use a match, so was able to continue with the jar sterilization process.

I had only looked for a new cooker earlier this year, and come back home with the vue that nothing was any better than what I had, and suddenly I knew I would need to revisit this.  At Knit and Natter that day, I talked over my dilemma with friends, and reviewed what I really liked about my cooker, so thought a repair would be the best thing.  Back home I went on line, went through to the manufacturers to be told that the cooker was 'obsolete' with no spares carried any longer by them as they had ceased making this one in 2001.  I really thought the person I spoke to would be true to their word and call me back the following day with the spare part number, but no they did not.  Despite or maybe it was because of this my dearly beloved looked up the wiring diagram, got the back of the cooker off, checked circuits, dismantled bits, cleaned sparky bits etc, and et voila, a fully working oven which light first time....

During my sewing stint I was listening to Radio 4, where there was a discussion about letter writing.  I found it quite interesting, and the person from Paper Chase was of course pushing the idea that blank cards were now the thing for people who are time pushed, rather than taking the time and effort of writing using Basildon Bond type pads of paper.  I guess this is more a sign that there is more money to be made from those rather than a pad of paper!  This minded me of the decisions I used to make:  I have several pads, with different coloured paper, different size pades, and one lightweight airmail one too.  I used to buy different inks too for the different coloured paper.  I know that people phone and email now, but one thing they did not mention in the discussion was the cost of a stamp.  I wonder how the cost now compares to the cost say in the seventies and eighties when I used to write at least half a dozen letters a week.

Yesterday I learnt that my little grand daughter had bought a card for me on her recent holiday, but decided to keep it for a bit because she liked it so much!  A chip off the old block I think, so I shall show her all the cards I buy to send, but which get put in my basket.  I've just picked up a few here, with my nice fountain pen.  I love prints and some designs and admit that I usually buy mine when I have spent time looking in arty type shops, when I feel sorry for the owners that I am not buying one of the original art works...I cannot resist Angie Lewin Cards, and recently picked up a nice one called The Beauty of Life by Liz Toole.  This will be another artist to look out for. 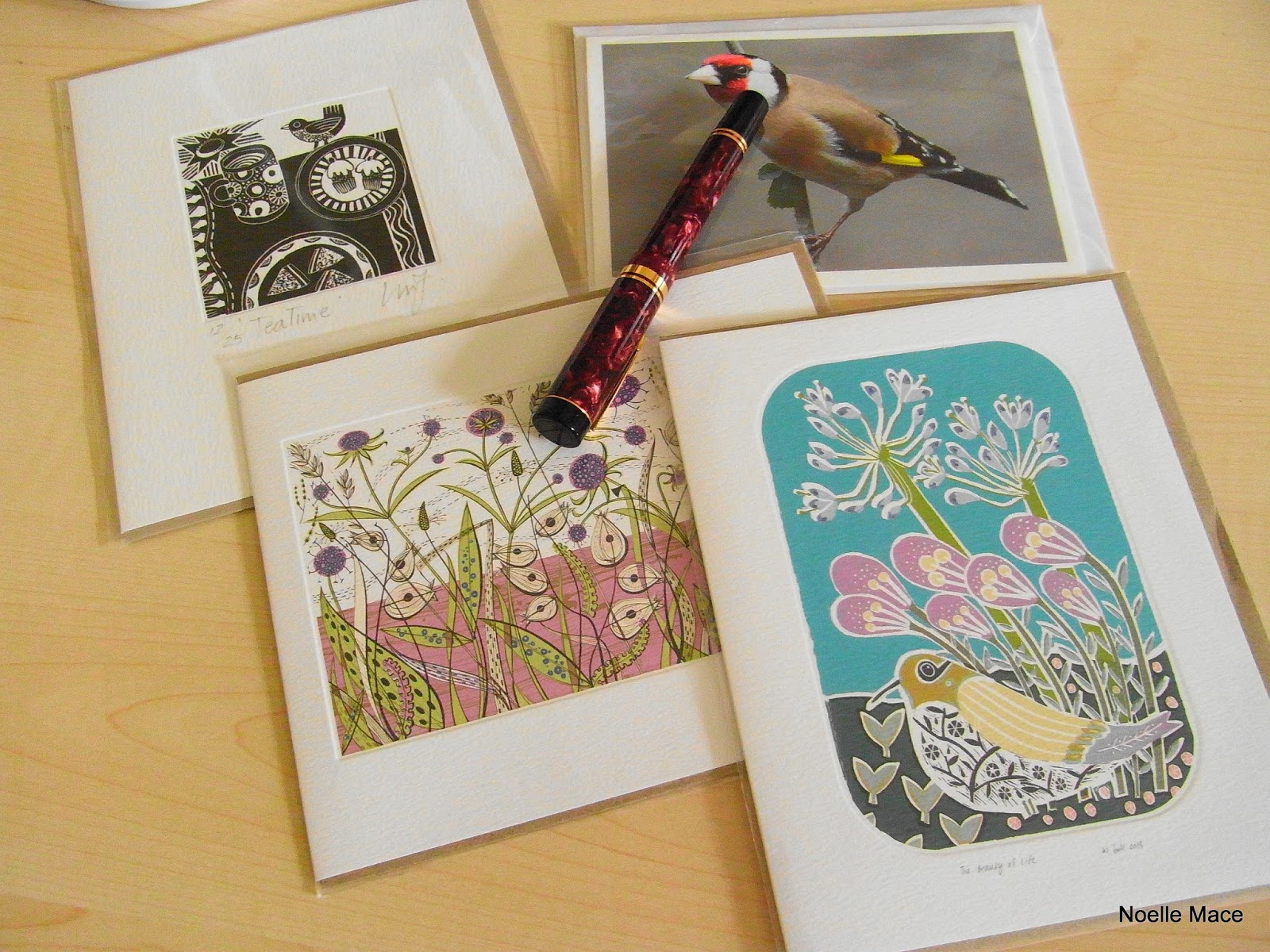 Apres le sourdough, the soft 'goat's' milk, butter and egg plaited bread this week, glazed and ready to go into the oven. 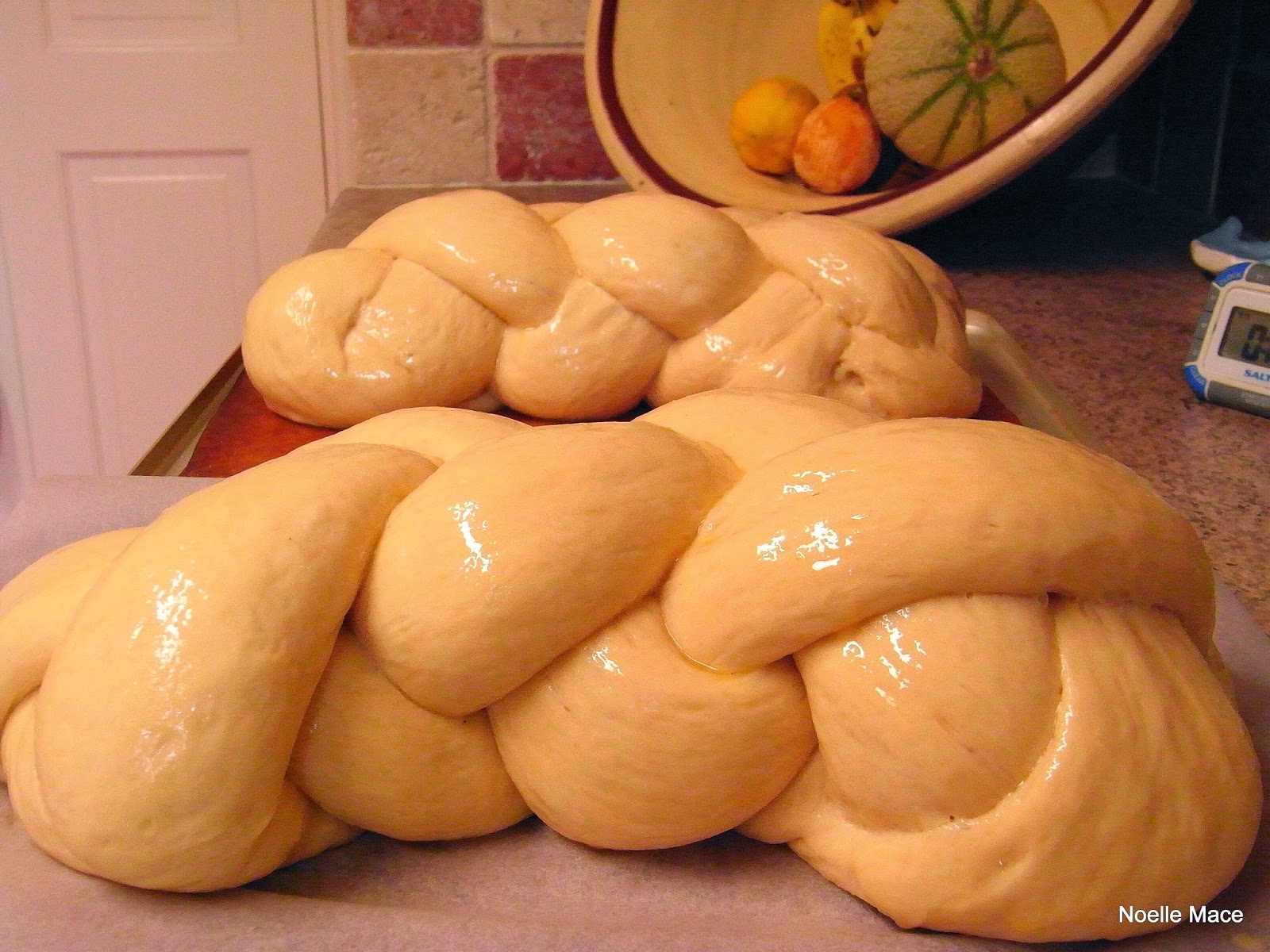 And finally a picture from the garden! One of my fifty shades of green 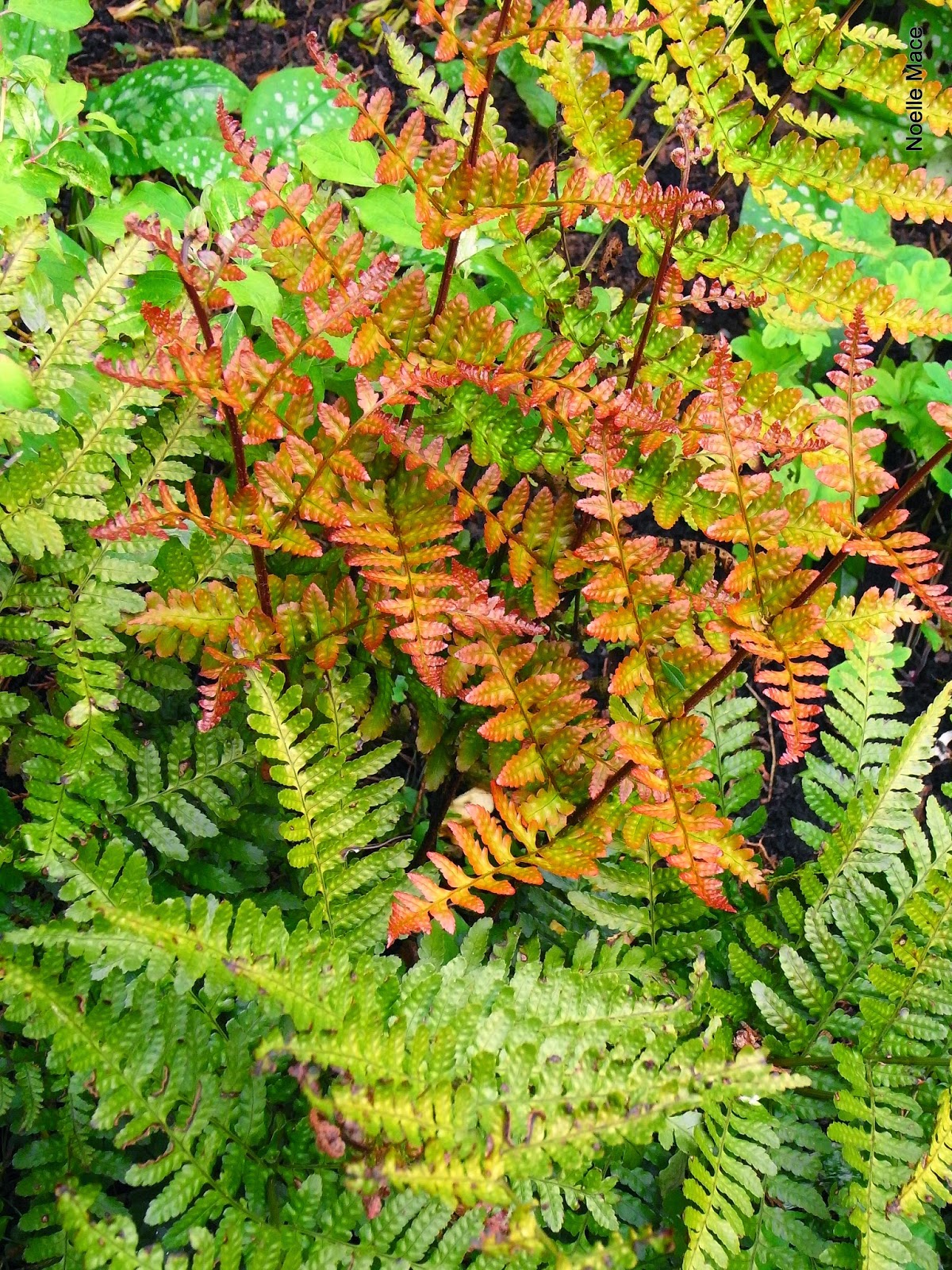