This is the mid June bake from Jane Mason's the Book of Buns, p 30.  They are a light tasty stick/bun which will be eaten here with tapas and soups, and no doubt one sneaked into a salad packed lunch for hubby...

They came out light and fluffy, herby with a nice crunch from the coarse sea salt, which I had brought back from our Sicily Holiday.  The crystals are hard and square and stand up well above the olive oil glaze on the buns.  You can also see the layers where more oil, salt and fresh oregano from the garden were spread.  The dough itself has no salt in, and there is quite a different mouth feel as a result.

You start with a predough, for one day it was on the work-surface, but for the next 24 hours it went into the fridge as it is really warm at the moment. 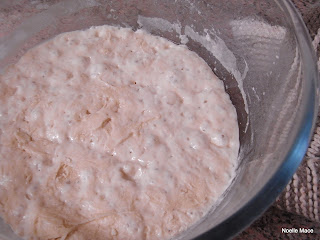 The recipe gives clear instructions, and a note to say there is no salt in the dough!  After a jolly good knead, it is left for its first proof under a layer of olive oil and clingfilm.  Sort of reminds me of my youth, on beaches in Mauritius, when you would sunbathe with just oil... 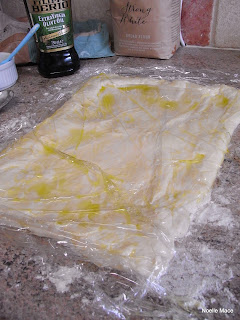 You then start to make the salt and herb layers.  The recipe suggest rosemary, but also gives alternatives.  As I have some roasted red peppers with rosemary to go with these, I thought a different flavour would balance this out, so chose some of the shoots of majoram which are just peeking into flowers.  A few days more and I would have to wrestle the bees and hoverflies for get to them!  Don't worry there are several clumps of different types in the garden...just because the bees love them. 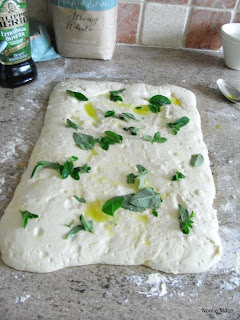 You do this layering, folding into three as you would do for a piece of paper going into an envelope, three times.  As the dough is quite soft and a little tricky to handle, I took full advantage of using both the long side and short end of the work-surface.  As it had been a problem with the dough sticking to the work-surface, I decided to do the final rise on the piece of clingfilm I used for the first rise, with a little oil brushed on..this really worked well for me.  Maybe I should have been much more generous with my flouring of the work-surface first time round. 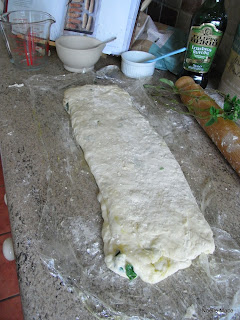 After another hour resting under a tea towel, it was time to get out the pizza wheel and get cutting the dough into little fingers. 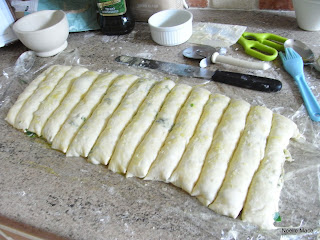 As I lifted the sticks onto the parchment lined tins, I realised how long they were, and cut them into two. 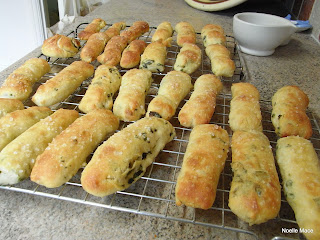 They are delicious, and quite different from any other bakes I have made.

As I was making these I have been listening to the radio, and wondering what the future for Greece will be.  I expect that there are many Greek people making their bastounakia today who will be also be extremely worried about their future.