Again this Friday I baked from The Book of Buns...a very traditional English Bake.  I've baked Chelsea Buns many times, but not to this recipe.  I have used spices, different fruits, added savoury fillings, but all have been baked so that when they have risen and been baked, they need to be prized apart to be eaten.

In this instance I followed the recipe exactly, with just raisins and candied orange peel, but I did add a little extra grated orange peel from the orange I was eating at the time!  The buns were placed far apart on two trays so that when baked they would look just like the picture in the book. 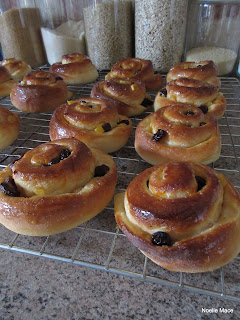 The dough bun is soft and tender, with the flavour of the fruit coming out, with just that lovely surface sweetness from the honey glaze.

I do like this 'not stuck together' form, as they can be easily frozen and reheated.  Yes I am still baking and losing weight because we are eating one at a time, on different days.  Sometimes we have one for breakfast!
Posted by Stasher at 18:55