I am sure there are very many recipes for these iconic buns which are enjoyed in many places.  In the UK it is Cornwall that claims it as one of their favourite regional delicacies, and I have recently found out that something very similar is enjoyed in the Scandinavian countries too.  I've never made or tasted them before.

To be sure, with saffron, sugar, eggs, and fats, these are a rich treat to be enjoyed occasionally.  When there were a couple of comments on Facebook about this recipe, I thought I would give it a try.  It is not yet scheduled in our regular bakes so I shall probably be making some more at a later date.

If I hear that there may be a difficulty with a recipe, it does put me a little of guard...a nervousness can creep in, and sometimes it is this lack of confidence, a certain trepidation that can effect the outcome.  Yeast dough is not always straight forward, it can be tricky, the yeast is a living thing...is affected by so much: heat, sugar, salt, fats etc...

I have looked at other recipes and maybe the one I am using does have quite a bit more sugar than others...and a lot of sugar in dough can delay the growth of yeast or even inhibit it.  I wanted to make sure the yeast had a good start, so soaked it in the saffron infused milk with only part of the sugar suggested for the flavoured milk.  I had some saffron given to me by my fried Marie Claire and it was just waiting for a special bake!

The yeast infusion did start to froth pretty well.  However in the interests of testing the recipe, I added all the sugar once I thought the yeast was growing well. 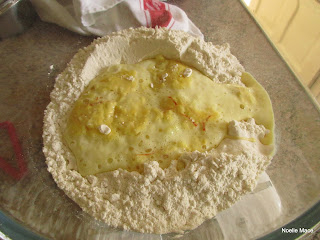 Once the yeast and milk had laid in its flour nest for the prescribed time, all the other ingredients except for the butter was added, the dough brought together, 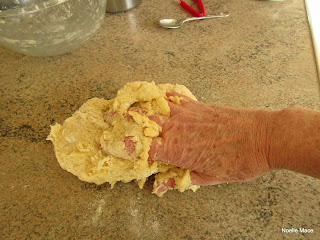 and then the kneading commenced...yes it is a sticky dough...but that is good, rather like a brioche dough, after ten minutes the butter was added, and another ten minutes kneading and using a scapper from time to time and the dough was ready for its first thirty minute rise..without the fruit. 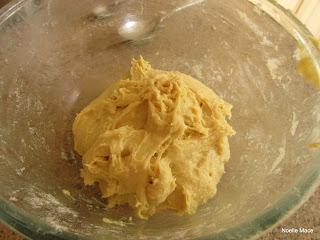 The well drained fruit was then added and after two hours there was a rather good rise. 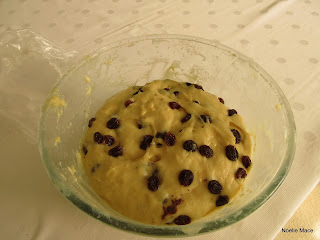 There are twelve buns of about 60g dough and they were set to rise on parchment lined tins..., with large plastic bags to cover them. 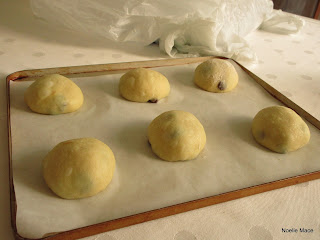 I felt that they needed much more that the 45 minutes resting, but it was cool, and I do not have a proving drawer...

I think they had about one and a half hours, then brushed with milk they went into the oven.  After a little changing over shelves...they needed a further five minutes but I reduced the temperature to Gas Mark 5 to avoid any scorching. 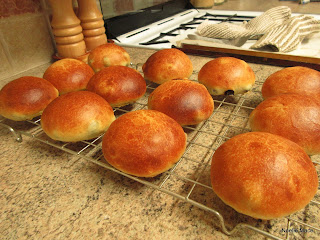 Hubby has just returned from work...so I am going down to make tea and settle down to a buttered bun!  Update...they are delicious, and not too much sugar, about 1.5tsp per bun, but my Safgold yeast would have been better than the standard dried yeast. By the way Safgold yeast works perfectly well with less sweet doughs too.   Hubby had his just like that, I had mine split with a little butter.
Posted by Stasher at 17:34

Labels: The book of buns by Jane Mason