The baking challenge from Jane Mason's Book of Buns for the first part of April 2016 is Dolce Milanese.  These small morsels are packed full of juicy raisins.  For a dough based on 250g flour, it gives 500g raisins, which need to be soaked overnight.  I must confess that I just could not get all the raisins into the dough.  The balance I used to make a nice little salad with the orange flesh, after using the grated orange peel in the dough.  Maybe 400g raisins would do.  It was a game of trying to get so many raisins into just a little dough...just the right sort of challenge, which meant I really deserved a nice little tipple to go with the first warm ones for  dessert!

When we tasted our first little buns last Friday, we started to compare them to other bakes...think of Eccles cakes but with rich buttery yeasted dough, or garibaldi biscuits, which have currants rather than raisins, and are biscuits, and usually come out of a packet.  Maybe some Victorian travelling in Italy came across Dolce Milanese on their grand tour and felt the need to replicate and turn this delicacy into a manufactured biscuit.  I love both Eccles cakes, and garibaldi biscuits, but Dolce Milanese really are the pinnacle of raisin deliciousness.

As well as using the rolling pin, I felt for most part of the process it was easier to use my hands to pat the dough into shape.  Very generously Jane has previously given me permission to put up any recipes here, and often I have just alluded to the book, since I feel that any home baker ought really to have the whole book at hand, so that they can just sit down and read the recipes, make their annotations, and also skip to the face book page where a band of us, if time allows, put up pictures of our bakes.

I have made a couple of changes to the timings which I shall adopt next time, as I feel that it would fit in with a morning bake.

The morning before bake day put
500g raisins, to soak in water to cover.

The evening before bake day, make the dough

Make up the dough according to Jane's techniques, with everything being kneaded for 10 minutes, before the butter is added, and then again kneaded for a further ten minutes.  The dough is soft and sticky so a good scraper is very useful, if like me you are doing this by hand.  Have your sleeves well turned up, a pinny on, because once you start, it will be almost impossible to get your hands clear.  I am diverting here from the recipe, as that is intended to have a six hour rise.  So to get the dough ready to shape and bake in the morning, I would put the dough in a bowl, leave it to rise for an hour, and maybe then finish off the rise overnight in the fridge, if the kitchen is warm.

Early on the morning of bake day, get the dough out of the fridge, and whilst you have breakfast etc, allow the dough to come to room temperature.

The dough is sticky, so a little more flour is required for the worksurface, rolling pin etc.  Whichever way is easier, gently turn then dough out and flatten it into a rectangle about 5mm thick, and scatter about a third of the well drained raisins over the majority of the surface, then bring in the two other edges to the middle.  Pat or roll out again, and repeat this twice. I used both a spatula and scraper to help achieve this. 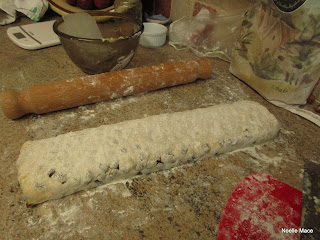 Leave the dough to rest seam side down, floured and under a cloth for about 20 minutes, then go back, cut it down the middle long ways, then cut into buns..giving about 20 buns in all.

Put the buns onto trays lined with baking parchment, and allow to rest for another 20 minutes, during which time the oven will have been turned on, so that it get to Gas Mark 7, 220 C by the baking time.
Glaze the buns, with Jane's glaze, which is made up of a whole egg, 1 tbs water, and a pinch each of salt and sugar.  I like to do a 'double glaze', glaze once, leave a minute or two, then glaze again.

They ought to take about 20 minutes...but watch them.  I change over the trays, and often at the same time move some of the outer ones to the inside if they look as if they are getting too brown.  You can also cover with foil or baking parchment.  Because the raisins have been well soaked, they stay very moist, and do not scorch. 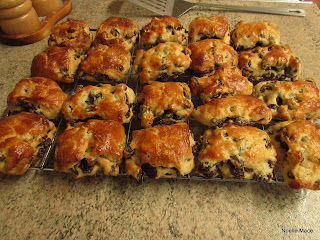 They freeze beautifully, and if eaten later or when defrosted, it is well worth, warming them in a moderate oven, for five minutes...a little dusting of icing sugar gives them that extra sophisticated Italy look!   Questi sono così stupendo....

When my official taster came on Monday, we asked Daniel how he would score then from 1 to 5.  He said 1, when I said: "Oh, that is a really low score, so you don't like them", Daniel replied no 6,7, 9 out of 5...Well he is just 3 years and one month old!  But from the look on his face, we all realised that he liked them as much as we did.  My friends Mandy and Penny completely agree.

I used the remaining drained juices to add to my weekly standard bread......
Posted by Stasher at 17:23

Labels: Baking, The book of buns by Jane Mason