The recipe for mid March from the Face Book Group is on page 92 of The book of Buns:  Iced Buns.

This is just the right recipe for today Friday Bun Day.  Mr S will be delighted when he comes home this evening, and I wonder whether he will fish out 'The Railway Children' to watch.  He loves both the earlier and later versions of this film...and will surely remember the saving of the iced buns to celebrate Perk's birthday.  Very often this is the bun of choice when a bun is needed from a Baker's Shop. 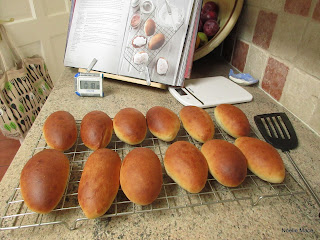 I opted to make this a little smaller at 60g dough weight giving 16 buns, of which two I decided to try out in a different shape. 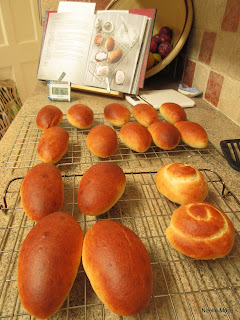 When Mr S will go for an iced bun, I go for a Belgian Bun, so another time I shall work out what put the 'Belgian' in the bun!

I've opted to ice just six buns, with the rest going into the freezer.  With a little lemon added to the icing sugar, I think I made the icing too thin...but I have the others to practice on with slightly thicker icing.  I think there is more icing on the counter than on the buns...I could have added more icing sugar to thicken up the mixture, but it was too late by the time the icing was on and dribbling down the sides. 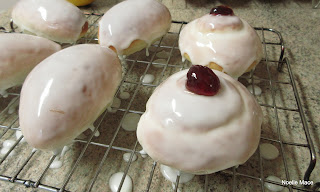