In a Vase on Monday - Myrtles and Hellebores

When I cleared away the vase of spent flowers yesterday, the mantle shelf looked a little bare but the little wooden lidded bowl I received from Mr S for Christmas stood out.  It is a 'vintage' bowl from Coos Bay Oregon, made from Myrtle Wood.  It is quite small but with lovely colouration from very dark almost black to pale golden cream.  When I received it and saw the classic label, I was delighted..Mr S had not realised that during the previous couple of years I had collected various 'myrtle type' shrubs for the garden.  Of course my myrtles come from various parts of the World.

I've been looking from the kitchen window towards the end of the garden for nearly a couple of months at the large clump of Hellebore flowers.  The individual flowers are beautiful. 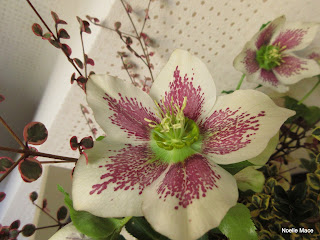 It is very early of course this year, and in previous years this plant had won prizes at the gardening club for twelve stems of spring flowers in April.  I'm not sure what will be left in good enough condition, so decided to cut a few for this week's vase. 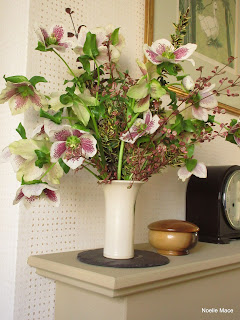 To go with them I cut stems from these myrtles: Myrtle Luma Apiculata Glauleam Gold, Lophomyrtus ralphii Little Star which has lovely little pink, cream and green leaves, Lophomyrtus ralphii Black Pearl, and Ugni Molinae Flambeau.  All of these are growing in pots, which I bring close to the house as I am not sure that they are very tolerant of hard frosts.

The sticky buds are unfurling in the sunny conservatory, 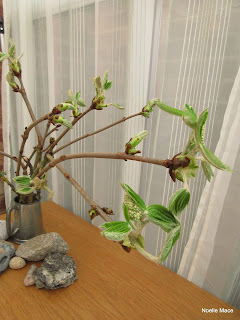 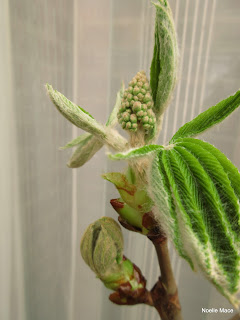 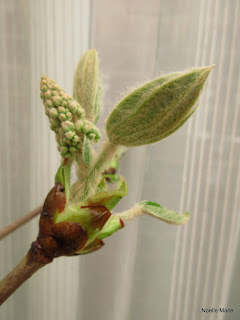 and having a lovely pot, but with drainage holes could not be called a vase.  I love ranunculas, and could help but come back from the market with three pots, and rather than cut the flowers, hope to have a succession of blooms over the next few weeks from the plants. 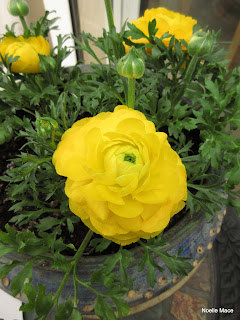 Simply by coincidence Cathy who hosts this meme has also posted about Hellebores.  Hers are quite marvelous and I love her description of the blooms...so do go there and she what she and others have posted this week.
Posted by Stasher at 13:10

Labels: Garden, Garden Posies, In a Vase on Monday, Plants