Anyone who is dabbling in sourdough will know the feeling...you are dealing with a 'living thing' and if you are not baking sourdough regularly, there is a trepidation somewhere in the process...
There is the refreshment of the mother which may have been languishing at the back of the fridge.  What size tin should one use or what would be the best proofing basket?  There is the unknown as to how long it will take in its final rise, and consequently at what time the loaf will finally go into the oven.  Then there is the question of how long ought the loaf to be baked for.

As with most things worth achieving, making good sourdough bread requires patience, practice, research, and if there are good recipes, and helpful guidance this ought to be an interesting journey.  Jane Mason's new book Perfecting Sourdough will be out shortly.  Already we have around thirty people join our group on Facebook called  Baking our Way through Perfecting Sourdough.

I wanted to refresh my starter and bake a sourdough loaf so had a read of All you Knead is Bread, and made a variation of 'Virtuous Bread'.  I used mainly stoneground wholemeal and some wholemeal rye,  and used some Chicken Fat in place of the butter or load, and some carob syrup in place of the honey.   Jane Mason had mentioned that chicken fat would have worked very well with my last walnut and fennel sourdough.  I love carob syrup.  I had it went I first went to Cyprus where I first tasted it on the delicious porridge served up at our hotel, and always being one to try new things, wanted to try the pure carob syrup.  It is thick and has the consistency of molasses.  It tastes nothing like chocolate in my opinion, it is not as sweet as honey by a long way, but has interesting complex flavours ranging from bitters, to caramel, or even malty.

I had a total weight of close to 750g and wondered what tin to bake the bread in.  I opted this time for the long thin loaf tin, which it filled to just above half way. 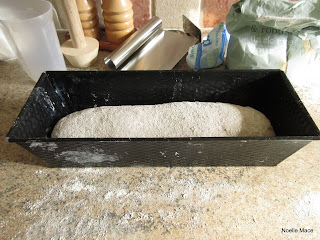 It took about four and a half hours to rise to the top of the tin, during which I was out 'crafting'.  I set the oven to gas mark 9 and in it went, then reduced it to gas mark 6 for half an hour, then finished it off without the tin for 5 minutes. 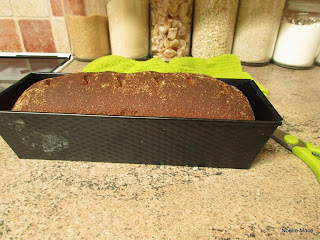 It went onto the cooling rack, 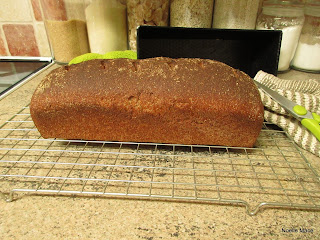 and I had been expecting to cut it in half, and freeze one half, and have a slice for breakfast...but we just could not resist a slice with a glass of milk for supper. 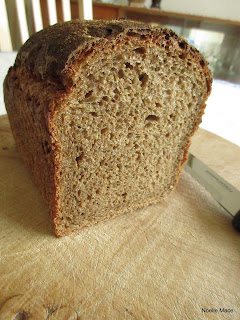 The loaf was light...evenly risen with no big holes, and absolutely delicious.  What would I do differently next time?  I would increase the amount to give me 1000g dough, by increasing all the ingredients by a third and bake in two seperate tins, just so that I have a whole loaf to freeze.  If I just wanted this long tin and not freeze, I would maybe add some walnuts too.